MGM Resorts has outperformed its rivals in Las Vegas over the past year and the reasons may surprise you.

Not long ago, MGM Resorts (MGM 2.79%) was struggling to survive after making a big bet on CityCenter and seeing the global economy implode at precisely the wrong time. Today, the company's 51%-owned subsidiary in Macau is now hitting on all cylinders and is building another resort on Cotai, and just as importantly, Las Vegas is on a slow and steady comeback.

What's surprising is that MGM Resorts is actually the top-performing Las Vegas-based company over the past year, beating Wynn Resorts (WYNN 4.20%), Las Vegas Sands (LVS 4.88%), and Caesars Entertainment (CZR). Just how has this happened? 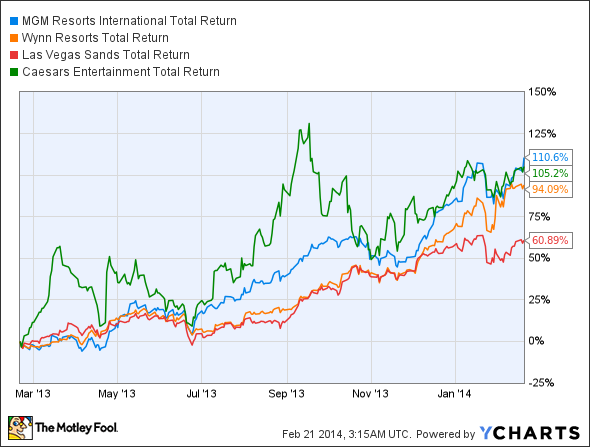 Slow and steady in Las Vegas
The recovery in Las Vegas has been frustrating to most investors, but revenue and EBITDA have been creeping up slowly. Over the past year, MGM increased revenue at wholly owned domestic resorts by 2% to $6.1 billion and EBITDA was up 8.9% to $1.44 billion. Those numbers don't match the 18.1% jump in revenue or the 19.8% increase in EBITDA last year at MGM China.

The Las Vegas Strip, where MGM Resorts owns nearly half the properties.

As long as EBITDA keeps growing in Las Vegas, MGM will have the capacity to pay its debts and even reduce leverage if it chooses to. That's a big reason the stock has outperformed competitors.

China kicks it up a notch
If you've followed gaming over the past decade, you know that Macau is now the center of the gaming world. It now generates seven times as much gaming revenue as the Las Vegas Strip, and it's driven huge gains at Las Vegas Sands and Wynn Resorts, which built resorts early there.

MGM was one of the late movers and is stuck on the Macau Peninsula for now, which isn't growing as quickly as Cotai, but the resort has still been a boon for MGM. This past quarter, MGM China announced a $500 million special dividend and recommended a $128 million final dividend, more than half of which goes to MGM. This is on top of a $113 million dividend paid in September, so MGM China continues to pay MGM back.

Once MGM China builds its resort on Cotai, there will be even more cash flow to distribute to MGM Resorts, and that will allow for a lot of financial flexibility.

Leverage
Above, I've focused on the improvements MGM has made operationally, but the reason the stock has outperformed rivals Wynn Resorts, Las Vegas Sands, and Caesars Entertainment comes down to leverage. Wynn and Las Vegas Sands have both grown faster but MGM's $13.6 billion of debt levers returns to stockholders.

The reason Caesars hasn't had the same success is that it does have the Macau exposure and generates most of its revenue from regional gaming, which is struggling. Leverage has been a help to MGM and dividends from Macau are helping lower debt, while Caesars's debt is hindering operations as regional operations struggle.

Foolish bottom line
MGM is still a higher-risk stock than Wynn or Las Vegas Sands, but leverage also gives it more upside for shareholders. If Las Vegas and Macau keep growing, the stock can continue to outperform the rest of the industry.

Travis Hoium manages an account that owns shares of Wynn Resorts, Limited. The Motley Fool has no position in any of the stocks mentioned. We Fools may not all hold the same opinions, but we all believe that considering a diverse range of insights makes us better investors. The Motley Fool has a disclosure policy.