There's little doubt that Gilead's (GILD -0.19%) first hepatitis C drug, Sovaldi, is going to be a success. After winning approval in December, Gilead (GILD -0.19%) sold $140 million worth of the drug to distributors in anticipation of demand. Gilead (GILD -0.19%) hopes it will have success with its first oncology drug, idelalisib, a compound the company filed for FDA approval as a treatment for indolent non-Hodgkin's Lymphoma last fall.

The excitement surrounding Sovaldi helped shares double in the past year. Now, with Sovaldi's approval in hand, will idelalisib and a strong oncology pipeline help Gilead (GILD -0.19%) put on a repeat performance in 2014 and beyond? 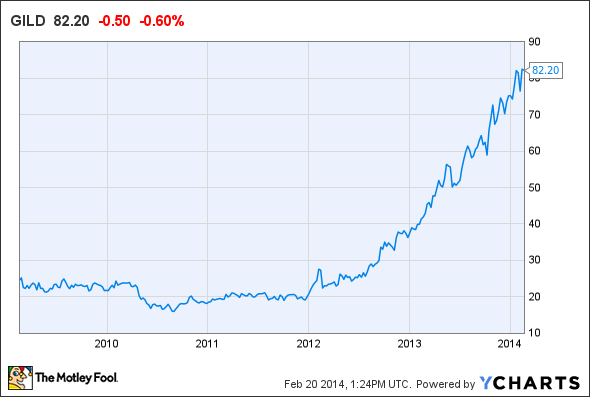 A multi-billion dollar marketplace
The need for new treatments for indolent non-Hodgkin's Lymphoma, or iNHL, patients who fail to respond to Roche (RHHBY -0.80%) and Biogen's (BIIB 0.23%) Rituxan is big. Rituxan is the current standard of care in treating iNHL, and for many patients Rituxan has a game-changing impact on prognosis. Its go-to position in iNHL has helped Rituxan become the 12th best selling drug in the U.S., with sales of nearly $800 million in the fourth quarter.

But Rituxan doesn't work for everyone, and in cases where patients fail on the therapy, the prognosis worsens. The most common indolent lymphoma is follicular lymphoma, accounting for 70% of all iNHL cases, and 25% of all NHL cases. Sadly, NHL's incidence rate is among the fastest growing, meaning some 70,000 people will be diagnosed with the disease in the U.S. this year.

Fortunately, idelalisib is putting up impressive results in trials. During phase 2, more than 50% of stubborn iNHL patients responded to the drug. Those results were strong enough for an accelerated filing for approval last September.

Expanding the label
However, idelalisib's potential may not be limited to iNHL. There's also an opportunity in chronic lymphocytic leukemia, or CLL. More than 15,000 people are diagnosed with CLL in the U.S., and some 4,500 die from the disease each year, according to the National Cancer Institute.

Typically, CLL patients are treated with chemotherapy and immunotherapy, however, most patients relapse, and some patients can't tolerate highly toxic chemotherapy. In a study of those hard-to-treat relapsing patients, combining twice-daily idelalisib with Rituxan was so effective that independent monitors halted the study early.

That suggests idelalisib could soon battle Johnson & Johnson (JNJ 0.61%) and Pharmacyclics (NASDAQ: PCYC) recently approved ibrutinib. The FDA cleared ibrutinib for use in mantle cell lymphoma in November and for use in CLL patients in February.

Johnson (JNJ 0.61%) and Pharmacyclics (NASDAQ: PCYC) have priced the four pill daily treatment at $130,000 per year for MCL patients. And since CLL patients take three pills instead of four, they'll pay a bit less than $100,000 per year. That has some analysts projecting peak annual sales for ibrutinib could reach $6 billion.

Fool-worthy final thoughts
The FDA will make its decision on idelalisib for CLL on August 6th, and the decision date for idelalisib as a treatment for iNHL is September 11th. Gilead (GILD -0.19%) also filed for EU approval last October, and an accelerated timeline suggests a decision from overseas regulators could make the drug available there in the second half of this year too.

That means shares may be very active in the third quarter as investors consider the impact of approval on Gilead's (GILD -0.19%) fourth quarter and 2015 results. Now, peak sales for idelalisib are projected at around $500 million to $700 million, so the drug may not become a blockbuster. But this is just the first of several drugs in an expanding oncology pipeline that includes a drug in phase 3 trials and three more in phase 2. This new area of competition could help drive future Gilead growth.

Todd Campbell has no position in any stocks mentioned. Todd owns E.B. Capital Markets, LLC. E.B. Capital's clients may or may not have positions in the companies mentioned. Todd also owns Gundalow Advisors, LLC. Gundalow's clients do not have positions in the companies mentioned. The Motley Fool recommends Gilead Sciences and Johnson & Johnson. The Motley Fool owns shares of Johnson & Johnson. We Fools may not all hold the same opinions, but we all believe that considering a diverse range of insights makes us better investors. The Motley Fool has a disclosure policy.