Sometimes collaboration deals with big pharmaceutical companies don't work out, and that was the case with Pozen's (NASDAQ: POZN) once-lucrative partnership with AstraZeneca (AZN 1.93%)The two teamed up to develop arthritis drug Vimovo in 2006, but sales have been elusive since the compound won FDA approval in 2010.

However, that may change given Astra sold its interest in Vimovo to Horizon (HZNP 1.04%)in November. Pozen hopes the shift to a more willing partner means Vimovo may finally fulfill its promise. If not, then Pozen's chances for success rest squarely on a recently inked deal with Sanofi (SNY 1.28%) instead. 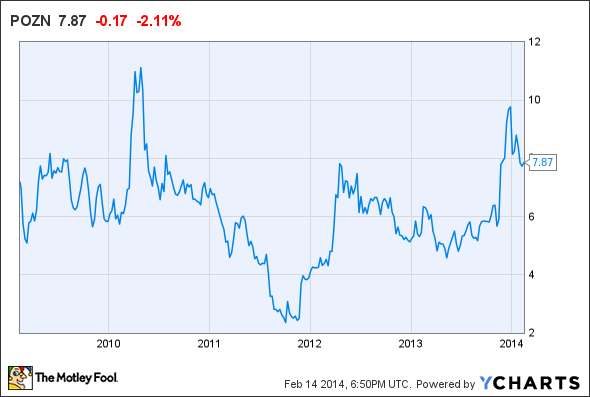 Resurrecting Vimovo
Between 2009 and 2011, Astra paid Pozen more than $50 million in milestones tied to Vimovo global filings and approvals. Yet, despite those payments Astra announced last March it was walking away from marketing the drug as part of major restructuring. As a result, royalties paid to Pozen by Astra totaled just $4.6 million through the first nine months of 2013.

That means the bar has been set pretty low for Horizon. The company paid Astra $35 million for the rights to Vimovo in hopes it can substantially boost sales by leveraging its existing rheumatology sales force.

While Horizon only recently closed on the acquisition, early results are encouraging. In January, Horizon reported Vimovo prescriptions improved 4% month-over-month in December.

That's good news for Pozen shareholders given Pozen will receive a 10% royalty on any of Vimovo's U.S. sales, or a minimum royalty payment of $5 million in 2014, and $7.5 million annually until generics reach the market.

Despite Vimovo's inability to capture market share, Sanofi still agreed to pay Pozen $15 million upfront last fall to team up on PA8140 and PA32540 in the United States. Pozen has already filed both compounds with the FDA for approval.

If approved, the two drugs may find a willing market. NSAIDs are often prescribed to prevent clotting and reduce the risk of heart attack and stroke. However, patients on aspirin therapy have up to a five-fold chance of getting peptic ulcers, which require additional treatment including proton pump inhibitors, antihistamines, and sometimes antibiotics.

More than 300,000 people are hospitalized each year for upper GI bleeding costing roughly $2.5 billion a year. Of those admissions, peptic ulcers account for about 60% of all cases, suggesting an opportunity for Sanofi and Pozen.

For this reason, Sanofi has also agreed to pay up to $20 million in additional milestones tied to the approval of the PA drugs, as well as a 12.5% to 22.5% royalty on sales.

Fool-worthy final thoughts
Bigger royalty payments for Vimovo would be welcome, but such payments hinge entirely on Horizon's sales team. That means Pozen investors should be watching Horizon closely for cues as to whether Vimovo is gaining ground or flat-lining.

It's similarly tough to gauge the potential impact of the Sanofi deal on Pozen given the PA drugs work similarly to Vimovo and have yet to win approval. Investors will need to watch the FDA closely on April 25th, the day they're scheduled to make a decision

If Pozen does get approval for those compounds, a partnership with a company for overseas rights will probably come soon after. However, since Pozen's fate rests on companies other than itself, it remains a highly speculative investment.