These five companies got it right.

If you're feeling good about the market, you're not alone. Take my hand as we go over some of this week's more uplifting headlines.

There's no shortage of critics arguing that the social networking giant is overpaying for the mega messaging app, but a lot of those likely think that Facebook is overvalued itself. That places the bulk of the price -- $12 billion in Facebook stock and another $3 billion in restricted stock units -- into a different perspective. The balance is $4 billion in cash, and that's not going to break the bank at Facebook.

Skeptics also feel that WhatsApp -- a site with no advertising that charges just $0.99 a year per user after the first year -- is just a bad business. Well, there were plenty of naysayers suggesting that Facebook overpaid when it shelled out $1 billion for Instagram, and the photo-sharing site has only grown more popular.

WhatsApp is the platform folks are using, and that's bigger than just the near-term monetization efforts. A whopping 54 billion messages were sent or received on New Year's Eve alone. There are more active WhatsApp users than one can find on just about any other social platform outside of Facebook. Facebook knows people. Give it some credit here.

Tesla wound up selling and delivering 6,892 cars during the period, wrapping up 2013 by moving roughly 22,000 Model S sedans. This year will be even better as Tesla plans on ramping up production to the point where it can deliver 35,000 cars.

Tesla's aiming to produce 7,400 cars during the current quarter, but a lot of those will be going overseas and won't be recorded as sales until the following quarter. Investors didn't care, bidding the stock higher on the strong financial results and rosy outlook.

3. It's the wood that makes it good
Once again, Lumber Liquidators (LL -0.58%) is making the most of a housing boom that finds homeowners and investors upgrading their homes with hardwood planks at discount prices.

4. It's a lock
Identity theft isn't going away, even if you didn't shop at the "cheap chic" retailer this holiday shopping season.

LifeLock (LOCK) has been a beneficiary over the years, as folks turn to the company to monitor potential ID breaches. It scored another strong quarter, with revenue climbing 30% and adjusted profitability more than doubling.

LifeLock has been surprisingly consistent. It has rattled off 35 consecutive quarters of sequential growth in revenue and subscriber count. There are now more the 3 million LifeLock subscribers, and retention rate is improving. It's good to cater to the paranoid.

This week Google announced that it has invited U.S. cities in nine metro areas to work with the search giant to explore bringing Google Fiber to their residents. At a time when there's consolidation among broadband providers and many leading players are offering slowing speeds on digital video, the time is right for Google to get aggressive with its platform. 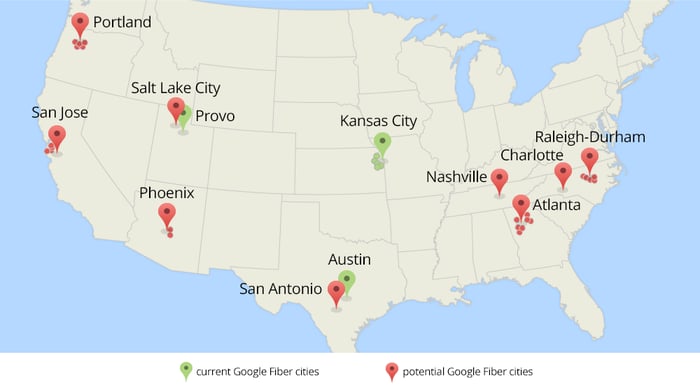