A solid quarter for ETP is clouded by a big one-time charge.

The elephant in the room
Energy Transfer's fourth-quarter loss of $462 million was caused by a non-cash goodwill impairment of $689 million related to the partnership's Trunkline LNG subsidiary. Energy Transfer Equity (ET 0.72%) has since closed on its purchase of Trunkline. The charge obliterated what would otherwise have been a $75 million year-over-year increase in operating income. The loss was exacerbated by increased interest and tax expenses.

That said, revenue, adjusted EBITDA, and distributable cash flow were all significantly higher on a year-over-year basis:

These numbers imply growth. Indeed, management spent quite a bit of effort in 2013 consolidating numerous acquisitions under one roof. But they also suggest health in the underlying operations. With this chart in mind, let's take a look at ETP's quarter segment by segment. 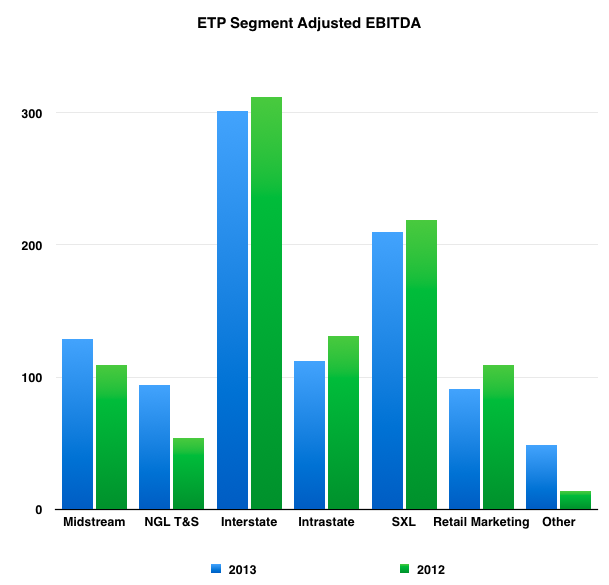 As the chart shows, slight declines in four of the seven segments are not enough to mitigate the gains posted in the midstream, NGL transportation and services, and "other" segments, as 2013's adjusted EBITDA of $986 million was a $35 million improvement over the prior year.

The two weakest segments based on adjusted EBITDA decline were the intrastate transportation and storage unit and the retail marketing unit. Problems in the intrastate segment stemmed from a significant decline in volume, which dropped revenue $67 million for the quarter. Revenue also declined in the retail marketing segment, from $5.9 billion a year ago to $5.2 billion, largely due to exceptionally high gasoline margins in 2012.

On the bright side
Despite the ugly net income figure, Energy Transfer did post positive distribution coverage for the fourth quarter and the full year. This is extremely important given the partnership's commitment to increasing its quarterly distribution on a consistent basis going forward. In contrast, Energy Transfer did not post positive coverage for its distribution last year. Its annualized payout now stands at $3.68 per limited partner unit, good for a 6.8% yield at today's price. That's a solid yield given the payout is probably the most reliable it's been in the last five years.

Aimee Duffy has no position in any stocks mentioned, and neither does The Motley Fool. We Fools may not all hold the same opinions, but we all believe that considering a diverse range of insights makes us better investors. The Motley Fool has a disclosure policy.