Please ensure Javascript is enabled for purposes of website accessibility
Log In Help Join The Motley Fool
Free Article Join Over 1 Million Premium Members And Get More In-Depth Stock Guidance and Research
By Ashraf Eassa – Feb 22, 2014 at 10:05AM

While the Ultrabook specification from Intel raised the bar on high-end PCs, the low end of the PC market is still a wasteland.

There's a dirty little secret in the computer industry that many computer enthusiasts are aware of but mainstream buyers may not know. Users are trained to think that more cores, more gigahertz, and more gigabytes are "better." But the PC industry has focused so much on trying to sell headline specs in a crowded market that it has apparently stopped making decisions that are the right thing for the user experience. Intel (INTC -1.11%) can change this.

While Intel could probably be more aggressive with this specification, the concept here is pretty good: have a minimum quality standard so that customers know that when they're buying an Ultrabook, they're getting something that's at least good.

What's wrong with the Ultrabook is that it's really a higher-end specification. Intel's original thinking was to try to drive up mix and to stop people from buying tablets, and instead opt for 2-in-1 solutions with Intel's Core chips. But it's clear that this isn't going to work. The low end and mid-range is what is currently under attack by tablets and, by extension, the ARM ecosystem. Intel can't stop the tablet trend -- and indeed, it is now finally embracing it -- but it can certainly do things to shift wallet share back to the PC.

The Lenovo Yoga 11: A history lesson
When Lenovo (LNVGY -0.67%) first introduced its Yoga series of laptops, the machines came in two flavors: a 13-inch model powered by Intel's Ivy Bridge architecture that required a fan and had poor battery life, and an 11-inch model powered by an NVIDIA Tegra 3 that offered great power and battery life but extremely poor performance. It also lacked full Windows application compatibility, and was very richly priced.

The Tegra 3 model sold so poorly that Lenovo quickly discontinued it and, following CES 2013, rolled out an updated version with a "seven-watt" version of Intel's Ivy Bridge architecture. Unfortunately, this didn't feature the power-saving features that Haswell eventually brought, so it required a fan and offered pretty poor battery life. But the performance was quite good.

Eventually, Lenovo released a version of the Yoga 11 with Intel's low-power Bay Trail-M processor, based on the low-power Silvermont architecture. This finally offered strong performance without the need of a fan. The platform itself was also quite cost-effective as it was a fairly small die size, and used a single die, unlike the Core products, which require two. All in all, it was the best of both worlds -- as low-power as the best ARM solutions, but with strong performance and full Windows 8.1 compatibility. Unfortunately, there was just one crippling flaw with this system.

What is with that hard disk, Lenovo?
Here is the specification list for the Yoga 11 with Intel's Bay Trail-M:

You'll notice that the system seems mostly compelling: a nice quad-core Pentium N3520, 4GB of RAM, and an 11.6-inch touchscreen. The fly in the proverbial ointment is the 500GB 5400-RPM hard disk drive. Contrary to popular belief, for everyday usage, the most dramatic impact on the PC experience doesn't come from the processor or the RAM, but from the storage subsystem. Indeed, solid-state drives make the system feel much faster. The trade-off is that the cost per gigabyte is much higher.

This is why Intel, in its recent presentation on Bay Trail-M for low-cost convertibles, suggested that these devices sport hybrid storage systems: a 500GB hard disk drive married to a small, 16GB SSD cache to try to capture the best of both worlds, on a budget: 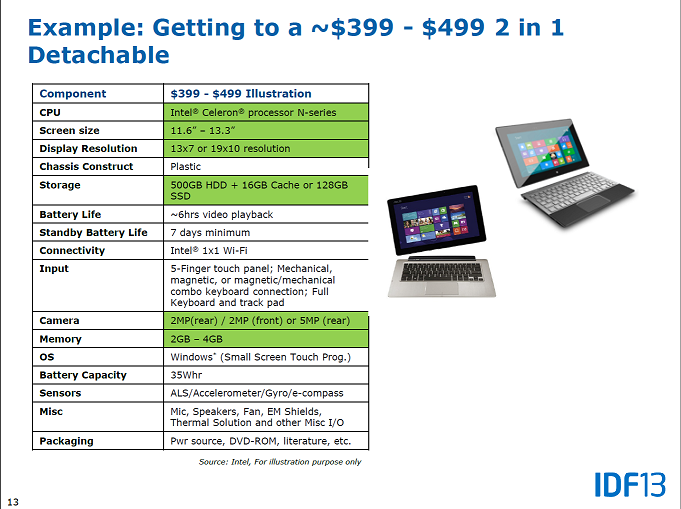 It's puzzling that Lenovo, which is one of the better PC vendors, would skimp on the storage system. The problem is that this is industrywide, and it's this kind of corner-cutting that makes tablets with Bluetooth keyboards so much more desirable to many than low-cost Windows PCs. The PC industry needs to try to make quality devices across the stack -- not just at the $999-plus price point.

Foolish bottom line
The PC is still an important tool in the lives of many, but the system vendors keep making compromises that save a few bucks and significantly hurt the user experience. End users are tired of subpar systems, as evidenced by the popularity of devices like the iPad as an alternative to lower-end notebooks. It's time to bring the focus back to the user experience in the PC world, and it begins by focusing on the things that matter -- not in having flashy large numbers or by saving a couple of bucks.

Ashraf Eassa owns shares of NVIDIA. The Motley Fool recommends NVIDIA. We Fools may not all hold the same opinions, but we all believe that considering a diverse range of insights makes us better investors. The Motley Fool has a disclosure policy.