This office supply giant has grown its dividend by 140% over the past decade and its current yield is rapidly approaching 4%!

Today we're going to look at one dividend-paying company that you can put in your portfolio for the long term without too much concern. This isn't to say that these stocks don't share the same macro risks that other companies have, but they are a step above your common grade of dividend stock. Check out the previous selection.

This week, we'll turn our attention to office-supply superstore Staples (SPLS), which may be on the precipice of becoming a dividend investor's dream stock. 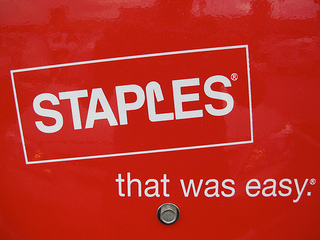 Staples get clipped
Just because I believe Staples is turning the corner doesn't mean it's been in any way easy for the office and electronics giant.

Staples has struggled mightily as e-commerce platform Amazon.com (AMZN -1.40%) has swopped onto its home turf and taken away small-business customers, as well as individual consumers, by offering them discounts to Staples' in-store prices, and considerably more convenience as they technically don't need to leave the comfort of their home to order. Consumer electronics retailer Best Buy (BBY -1.91%) faced similar struggles in 2012 and 2013, and was forced to make drastic changes to its sales approach, including downsizing some of its stores, incentivizing its sales force, and price-matching its competition, all because of Amazon's growing influence.

Were that not enough, Staples' two lead rivals, Office Depot (ODP -2.28%) and OfficeMax, announced a merger last year aimed at reducing costs through synergies and more effectively competing against Staples on a price and advertising level. In other words, Staples was feeling it from all fronts.

The Staples turnaround is under way
Yet for each of Staples shortcomings, it's discovered pathways to improve its business over the long run.

As I noted in late 2012, Staples has been proactive about its square footage well in advance of Best Buy, noting that it would reduce its square footage by about 15% as it chose to instead focus its efforts on its online sales, as well as mobile and tech-based traffic-driving products.

Last year Staples began selling Apple products in its stores and via its website, adding a reason for consumers to skip the long drive to the Apple Store and instead head to Staples.

Likewise, Staples became the first national retailer to start selling 3-D printers. The end result of these moves should be improved customer traffic, and the ability for Staples to honestly challenge Amazon for the No. 1 spot in office supply e-commerce within a few years. Ultimately, Amazon has its fingers in a little bit of everything, so Staples shouldn't have too much trouble unseating it as the premier online office supply company if that's strictly what Staples is focused on.

Another factor to consider is that the ongoing merger between Office Depot and OfficeMax, which was completed in November, is going to result in an unprecedented opportunity for Staples to recapture market share in the U.S. that it hasn't seen in probably more than a decade. As Office Depot shutters unnecessary stores, Staples has the opportunity to swoop in and capture displaced customers. Over the next year it's not as if Office Depot is going to be in any position to rival Staples in terms of advertising, with its focus simply on cost-cutting, which should allow Staples' domestic sales to edge noticeably higher.

Show me the money
Staples might be the epitome of a relatively "boring" and slow-growth business model, but boring does have its advantages.

One of the primary advantages for Staples is that, barring very deep recessions like what we experienced in 2008-2009, you can count on steady cash flow from its office supply business. Although office supply is a relatively slow-growing sector, it also makes up the bulk of Staples' revenue, allowing the company to predict, somewhat accurately, what sort of cash flow its can expect in a given year. For shareholders, that means a consistent or growing dividend. As you can see from the payout history, Staples doesn't necessarily boost its dividend every year, but when it does, it usually makes it count. Since 2004, Staples' annual payout has soared 140% to $0.48 from $0.20. Furthermore, even though the company chose not to boost its payout during the height of the recession, it didn't drop or suspend its dividend, either, thanks to its aforementioned relatively predictable cash flow.

What investors are left with is a company paying out a handsome 3.7% yield amid a reasonable payout ratio of just 39% based on this year's projected EPS, according to Wall Street estimates. What this tells me is that further dividend hikes are quite possible, especially given its cost-cutting and traffic-driving initiatives. Wall Street has largely given up on Staples, but as a deep-discount value investor, I'd suggest it could become the perfect income play for risk-averse investors.

The Motley Fool owns shares of, and recommends Amazon.com and Apple. It also owns shares of Staples. We Fools don't all hold the same opinions, but we all believe that considering a diverse range of insights makes us better investors. The Motley Fool has a disclosure policy.

These 3 Dividend Stocks Could Slash Their Payouts
363%