Lung cancer is the third-most diagnosed type of cancer, but is the most deadly. These are the five states with the highest incidence rate of lung cancer in the U.S.

There are few, if any, diagnoses scarier than cancer, primarily because it's a disease that has had billions of dollars thrown at it over the course of the past three decades, yet researchers, and we as a nation, are still very much in the dark as to how and why cancer cells form, trigger, and replicate in the first place.

Perhaps no cancer tops the list of those which are most feared more than lung and bronchus cancer. Although lung cancer is only the third most prominently diagnosed cancer each year, behind only prostate cancer and breast cancer, lung cancer is by far the biggest killer of all, claiming more deaths, according to figures from the Centers for Disease Control and Prevention in 2009, than prostate cancer and breast cancer, combined. 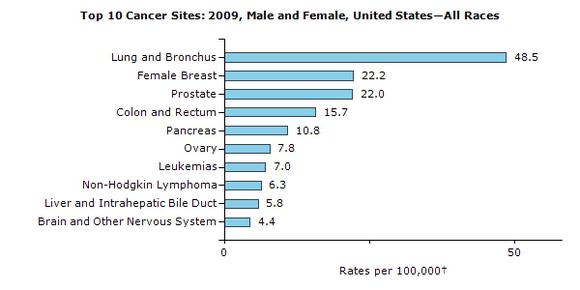 One of the primary concerns with lung cancer is that while some advancements have been made in recent years, these have been baby steps rather than large leaps. Since 1975-1977 through 2002-2008, the number of lung cancer patients alive five years after diagnosis has only risen from 12% to 17% -- and a big chunk of this improvement likely has to do with better awareness of lung cancer risk factors such as smoking. Smoking rates have dropped by 55% over just the past 50 years, which should have contributed in a positive way to this visible improvement. Lung cancer treatments, however, are still viewed as having a long way to go.

Five states where lung cancer occurrence is the highest
Unfortunately, certain states within the U.S. exhibit a significantly higher incidence of lung cancer than others. Today, we're going to look at which five U.S. states boast the highest incidence of lung and bronchus cancer cases according to the Centers for Disease Control and Prevention, as well as note some of the groundbreaking new lung cancer treatments on the market, and possibly coming to market, which may make a difference in the coming years.

Here are the five states where lung and bronchus cancer incidence is the highest:

Source: Centers for Disease Control and Prevention, rates per 100,000 people for men and women, based on 2010 data.

To add context to these figures, the national average lung and bronchus cancer incidence rate is about 62 people per 100,000, with Utah claiming the nation's lowest rate at 26.8 cases per 100,000 people. There are a couple of contributing factors which could lead to this east of the Mississippi River bias that we also witnessed with overall cancer incidence rates.

One big factor is obviously smoking rates. Tobacco products have been decisively linked as a primary contributing factor to lung cancer and a number of other cancers, yet quite a few of the states on this list have a percentage of adult smokers well above the national average of 18%. According to a study from Health.com, Kentucky, Mississippi, Tennessee, and West Virginia all rank in the top 10 among states with the highest percentage of smokers. In addition, states like Kentucky rely on tobacco production for jobs and state revenue, with the states' farmers responsible for growing 150 million pounds of tobacco products in 2012.

Another possible factor is obesity, which has been shown to be a high-risk factor for a number of different types of cancers. Based on a 2012 self-reporting study by the CDC, 13 states have obesity rates above 30%. Four of those 13 states -- Mississippi, Tennessee, Kentucky, and West Virginia -- are among the states with the highest lung cancer occurrence rates.

Finally, there's the potential that exposure to trace elements, some of which are known to cause cancer, such as arsenic, cadmium, chromium, and nickel, in the Appalachian Mountain region could be responsible for this East Coast-versus-West Coast incidence rate bias. In 2011 the U.S. Department of Defense awarded the University of Kentucky's Markey Cancer Center $1.43 million to conduct a three-year study on these elements in soil and water found in eastern Kentucky. We should have the results from this study later this year.

How lung cancer treatments look today
In addition to improving risk factor awareness related to lung cancer, biopharmaceutical companies around the globe have introduced new medications and are developing new treatment pathways, which do demonstrate promise for lung cancer sufferers. Since non-small-cell lung cancer, or NSCLC, makes up around 85% of all diagnoses, it will be the primary focus of our discussion.

In terms of existing therapies, perhaps none have demonstrated more promise recently than Celgene's (CELG) Abraxane or Pfizer's (PFE 0.50%) Xalkori.

Celgene's Abraxane, which was approved as a second-line treatment for metastatic breast cancer in 2005, was given the additional indication of treating lung cancer by the FDA in 2012. Studies showed that Abraxane in combination with carboplatin caused tumor shrinkage in 33% of patients, compared with just 25% who took paclitaxel plus carboplatin.

Pfizer's Xalkori is more specialized, focusing on a specific defect in a gene called anaplastic lymphoma kinase, or ALK. This defect is found in about 5% of all lung cancer patients. While it's been difficult to determine whether there's a survival benefit to the drug, Xalkori definitely delivered an improvement in overall response rate over the placebo in trials. Its accelerated approval in the U.S. in August 2011 came after two trials demonstrated an objective response rate of 50% and 61%. In an EU study presented at the European Society for Medical Oncology in Vienna in 2012 of 347 ALK-positive patients, Xalkori more than doubled progression-free survival, or PFS, to 7.7 months, from three months for the placebo.

How lung cancer treatments are adapting
Researchers, until now, haven't fared well with attempting to attack lung cancer with focused or global therapies, so they are instead turning to the next, most logical, solution -- retraining the body's immune system to recognize and fight lung cancer.

Cancer immunotherapies are all the rage right now -- and for good reason. We're just touching the tip of the iceberg with our immune response knowledge, and we're already witnessing a number of improved progression-free and overall survival statistics in select other cancer types by retraining a patient's immune system. Within lung cancer, there are a handful of companies and therapies you should have your eyes on.

One group showing incredible promise are anti-PD-1 inhibitors like Bristol-Myers Squibb's (BMY -1.38%) nivolumab and Merck's lambrolizumab. Following updated phase 1 data from a study involving nivolumab, we learned that survival rates at one year were 42% and 24% after two years, with a RECIST (response evaluation criteria in solid tumors) ORR (objective response rate) of 17%. That may sound unimpressive, but keep in mind that nivolumab was often used after a number of other failed therapies in non-small-cell lung cancer patients. For Merck's lambrolizumab, a 38-patient study in refractory NSCLC patients demonstrated a RECIST ORR of 21% with median overall survival of 51 weeks and median PFS of 9.1 week and 9.7 weeks based on investigator assessment and independent review.

But this is research that won't be dominated by pharma's biggest names. NewLink Genetics (NLNK), and Peregrine Pharmaceuticals (NASDAQ: PPHM), are getting their foot in the door as well.

NewLink Genetics, for example, lays claim to the HyperAcute immunotherapy platform, which works by modifying existing cancer cell lines to express alpha-gal, a carbohydrate we're naturally immune to, but that helps our immune cells recognize these cancer cells for termination. Its phase 2 data on tergenpumatucel-L demonstrated median overall survival of 11.3 months and stable disease in eight of 28 evaluable NSCLC patients.

Peregrine Pharmaceuticals could have an even bigger hit with bavituximab, which is being tested in a number of cancer types, but has been extremely effective by the numbers in treating second-line NSCLC. Bavituximab works by helping to block an immunosuppressive response created by phosphatidylserine, which is found on the outside of cancer cells and leaves them undetected by the immune system. In its final phase 2 results, bavituximab more than doubled median overall survival to 12.1 months, from 5.6 months in the control arm, and improved PFS by 40%.

Finally, moving away from immunotherapies for a moment, don't forget about Novartis' breakthrough therapy LDK378 for ALK-positive NSCLC for patients who have progressed while taking Xalkori. In early studies, LDK378 demonstrated an ORR around 60% which is incredible considering that it's a therapy given pretty far down the line.