Another quarter of losses has forced Groupon to shift further away from its core business and into a very competitive market.

Groupon (GRPN -5.74%) has a lot going for it. A first mover advantage in daily deals has led to scale and brand recognition that is unparalleled among its competitors. The business boasts 44 million customers and almost 70 million app downloads to date. Sounds like the start of a great business model, but the share performance of Groupon since its IPO tells a different story: 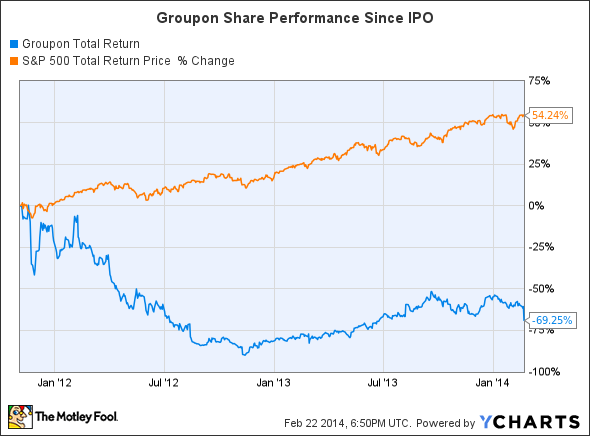 So what is the disconnect between a dominant market position and a losing stock?  It comes down to two simple concepts: profitability and strategy.

Groupon doesn't make money
Despite the seemingly simple business model of connecting customers and businesses and keeping a percentage of each transaction as revenue, Groupon can't seem to make money. This chart shows Groupon has never generated positive net income over a 12-month period: 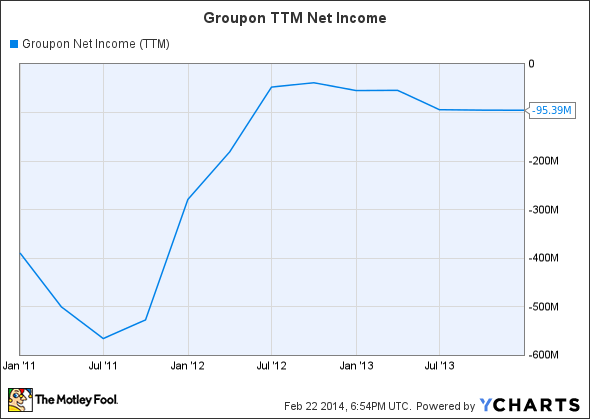 The problem that Groupon has not been able to solve is the management of its selling, general, and administrative expenses (including marketing expense but excluding stock compensation). While these expenses improved as a percentage of revenue from 58% a year ago to 47% in  the fourth quarter of 2013, this is still far too high a percentage for the business to ever turn a consistent profit.

An additional problem exists with respect to Groupon's "rest of the world" segment, which reported an operating margin of -20% in the most recent quarter. In response, Groupon has decided to limit future investment in China among other efforts to stop the bleeding.

"Next, Pull. Our vision is to make Groupon the place you start when you want to do or buy just about anything, anywhere, anytime. We want people checking Groupon first before they buy something, because we have the world's largest marketplace of deals."

This is a bold strategic decision, and one with significant consequences. By going "all in" on the idea that customers are going to look to Groupon first for deals on goods (electronics, apparel, etc.), travel deals, and "Freebies" (coupons to brand name retailers), Groupon is departing from its dominant position in the sale of push deals and taking on some of the most formidable competitors on the Internet. All signs point to this move being a mistake.

For starters, consumers already have a website or two (or 100) that they start with prior to purchasing goods. Amazon.com (AMZN -1.40%), Google's (GOOGL -0.94%) Shopping portal, and eBay (EBAY -0.55%) are just the beginning. Every retailer in the country has a web portal. Travel deals? Priceline.com (BKNG 0.46%), Expedia, and others have a huge head start. While Groupon's "Freebies" coupon portal has the best chance of success, it is again competing with Google Offers and a number of independent websites such as RetailMeNot that have a significant lead in terms of scale and consumer awareness.

Groupon may be able to provide a competitive deal if a customer is looking for something broad, like a cheap laptop. Any preference on brand and features? Then Groupon is instantly out of the mix and it is back to a competition among Amazon.com, eBay, and the thousands of other websites that sell laptops. Similarly, Groupon may be able to compete on flash deals for travel with a website like Travelzoo, but the options and ability to build custom packages is still far more limited than the functionality that Priceline.com offers customers. It is hard to envision Groupon being able to take market share away from any of these well-situated competitors.

What is so wrong with "push"?
The daily deals "push" marketing that gained Groupon worldwide attention wasn't really a broken model in need of fixing. The combination of sending daily emails that the customer anxiously read and the impulse nature of flash deals creates a unique way to connect customers and businesses. Plus, many of these impulse buys expired unused, adding to the profit for Groupon and its partners.

Groupon's local business continues to be its most profitable, as noted below:

So, why focus on trying to take on Amazon.com, Google, and Priceline.com when the local business remains the strongest business for Groupon?

Groupon not a buy with current strategy
A refocus on local "push" deals and continuing to leverage the tremendous mobile growth that Groupon has experienced with almost 70 million app downloads would get Groupon back on track by focusing the company back on what it does best: connecting its 44 million subscribers to local deals in over 1,000 cities.

However, the current strategy of seeking growth through direct competition with Amazon.com, Google, Priceline.com and others is unlikely to succeed.