Grocery chain Safeway has announced plans to find a buyer for itself as competition heats up from Kroger, Whole Foods, and Wal-Mart.

Shares of grocery giant Safeway (NYSE: SWY) were up 4% after-hours recently after the grocery chain announced that it was in discussions with potential buyers. Safeway -- the second-largest grocery chain in the country after Kroger (KR -2.09%) -- has struggled to keep up as the industry becomes more crowded with organic stores such as Whole Foods (WFM) and discount retailers from Wal-Mart Stores (WMT -2.33%) to Dollar General (DG -2.19%). Is selling itself the best move for Safeway?

The news of a potential sale came during the fourth-quarter report, which featured $11.3 billion in revenue with EPS of $0.35. Both numbers missed analyst estimates of $11.5 billion and $0.48, respectively.Safeway has now missed on revenue estimates in four of the past six quarters. Same store sales rose 1.6% but were offset by a decline in fuel sales.

How poorly has Safeway performed against its competitors?

Profits weaken as competition gains
Safeway faces competition from Kroger and other traditional grocery stores, health food chains such as Whole Foods, Wal-Mart and other retail brands, and discount stores like Dollar General. Safeway has one of the worst profit margins in the batch. 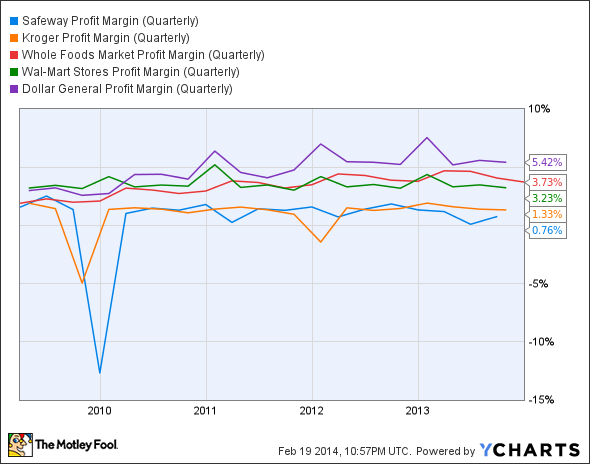 Wal-Mart and Dollar General both benefit from the ability to sell consumables at a loss or near-loss to get customers through the door to buy other products. Whole Foods has carved out a beloved niche in the health-foods market.

Kroger hasn't performed much better on profit margin than Safeway. However, Kroger's same-store sales excluding fuel increased by over 3% for the first three quarters of 2013 and that trend will likely continue in the fourth-quarter report in early March. Safeway's same-store sales growth excluding fuel didn't exceed 1.9% all year. Compare those numbers to the over 5% comps gain that Whole Foods recently reported and it's evident that traditional grocery stores are feeling the pinch.

It's a reasonable time for Safeway to find a safer harbor in a potential buyer. The potential sale shouldn't come as a surprise to anyone who has watched the company's actions over the past year.

Writing on the wall
Safeway didn't divulge any details as to potential buyers or terms. The news comes after a busy 2013 when the company focused on trimming operations as rumors began of an eventual sale.

In June, Safeway sold its Canadian operations for $5.7 billion to help pay off some debts and complete a stock buyback. In the fall the company began to sell its Dominick's stores in Chicago; Safeway plans to have offloaded all 72 Dominick's by early this year. Rumors of an impending sale swirled when Reuters announced that Safeway had hired Goldman Sachs to begin fielding offers from private equity firms.  However, then the company turned around and instituted a "poison pill" to keep an activist investor from pushing for a sale.

Safeway still has some deals on the table that it plans to carry through as sale talks continue. The company plans to distribute its 37.8 million shares of prepaid card provider Blackhawk Network Holdings to shareholders, which represent over 70% of Blackhawk's outstanding shares. Safeway is also exploring ways to monetize its 49% ownership in Mexican grocery chain Casa Ley.

Foolish final thoughts
Traditional grocery stores face a deeply competitive market where the other players have advantages in either pricing or niche. Safeway's the second largest grocery store in the country and its comps and profit margins look pallid. A well-backed buyer could help the company at least pull up to Kroger's level with careful product changes and pricing initiatives.