Much has been made about the Berkshire Hathaway addition of General Electric, but it turns out the additions to USG and DaVita Healthcare Partners were worth more to Warren Buffett.

The world now knows what stocks Warren Buffett and Berkshire Hathaway (BRK.A 0.35%)(BRK.B 0.40%) were buying in the fourth quarter, but that's not the whole story.

Perhaps the most attention-grabbing thing was the massive increase in Berkshire's position of General Electric (GE 0.31%). Buffett and team increased the holding by almost 17 times, adding almost 10 million shares, which is seemingly a staggering vote of confidence in favor of the company.

However, a look at the percentage increase can be distinctly misleading and present a broad misunderstanding of what companies Buffett and his lieutenants were actually most active in buying and selling during the quarter.

As you can see in the chart below, while the additional shares of GE were by far the largest percentage gain, on a raw dollar basis, it was actually only fourth largest: 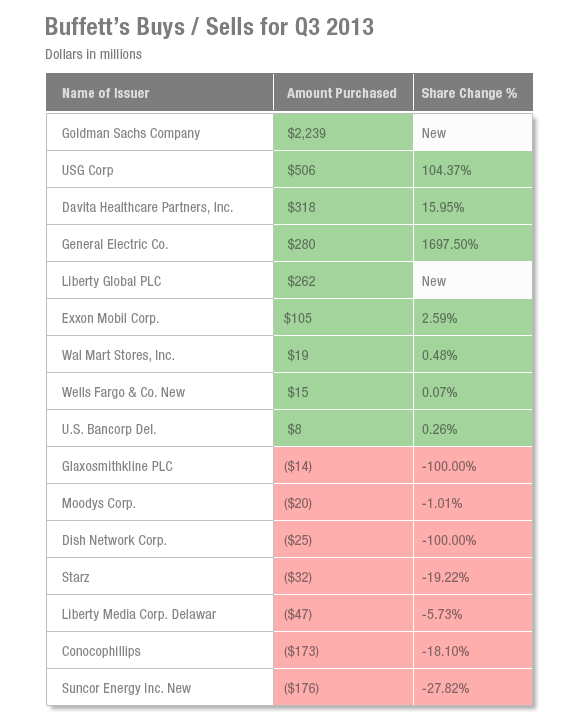 In no way should this discount the significance of the additional purchase of GE, as a $280 million investment is not something to be shrugged off. But the addition to the positions of DaVita Healthcare Partners (DVA 2.25%) and USG Corp (USG) were actually worth more.

First glance can be deceiving
You also may be wondering why the additions of USG and DaVita are noteworthy, but the $2.2 billion addition of Goldman Sachs is not. The Goldman addition was worth roughly 1.5 times more than the other eight companies combined.

However, the position in Goldman is actually not a new purchase at all, but instead a conversion of his profit from his existing investment in Goldman Sachs preferred shares as well as warrants to buy $5 billion more, which was made during the financial crisis in 2008.

The news Buffett would be taking his profit on that deal in the form of the common stock of Goldman Sachs was first revealed more than four and a half months ago at the end of September. While Buffett did take his profit in common stock and not in cash; however, it is hard to classify the addition of Goldman Sachs as a huge bullish sign for the Wall Street giant.

There is always much to learn from Warren Buffett's decisions to buy and sell shares of companies Berkshire Hathaway owns, but it is critical to see a simple glance at the holdings does not always paint the entire picture.