Gap and Costco might not have anything to do with one another, but paying employees well in an effort to drive production is a universal strategy. Will it work for Gap?

The Gap (GPS -4.66%) isn't only brave, but ahead of the curve. It might have even started a talent war in retail. The practice of paying employees more than peers has been proven to be effective by another retailer, Costco Wholesale (COST 0.33%) and this could have major ramifications for Foolish investors.

Higher pay means improved results
Prior to Gap announcing that it will raise its minimum hourly pay to $9 per hour this year and $10 per hour next year, Costco stood out from other retailers. Interestingly, no retailer stopped to think that this approach could also work for them. and this count have major ramifications for Foolish investors.

As a discount retailer, Costco should be less able to afford higher pay for its employees. However, the company currently sports a profit margin of 1.92%. Not sensational, but with consistent top-line growth it gets the job done. Costco also strongly believes that paying its employees well has a lot to do with its success. It leads to increased production, better customer service, and lower turnover. Average pay for hourly cashier at Costco: $15.05 per hour (via Glassdoor.com.)

Gap has a profit margin of 8.12%. Therefore, it can better afford to pay its employees than Costco. However, Gap likely isn't planning on suffering profit declines. Like Costco, Gap believes that increased pay for its employees will lead to increased production, improved customer service, and lower turnover.

Perhaps most important is that Gap will now attract the best talent in the industry. Fortunately for Gap, there are no laws or rules banning the monopolization of talented workers. If Gap attracts the best talent, then sales should increase (potentially more than offsetting higher labor costs.) Thanks to higher pay, the retention rate should be high as well. If all goes according to plan, Gap will have a significant edge over its peers. 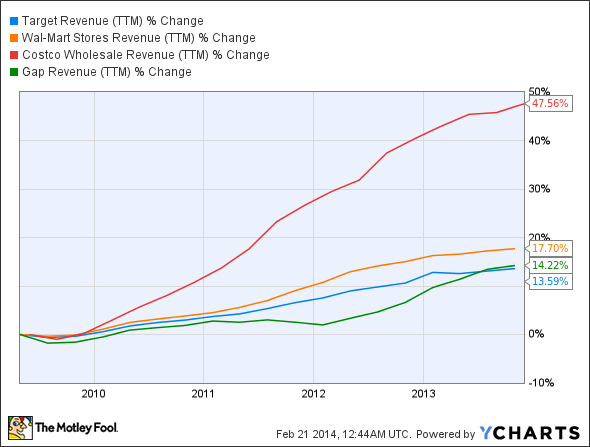 Costco is clearly outperforming its peers. Gap wasn't placed on that chart to be compared to Wal-Mart, Target, and Costco, but to show you that a successful company has a chance of future market share gains and top-line improvements.

Job impact
According to Gap, its minimum wage increase has the potential to raise pay for 65,000 to 90,000 people across all of its brands. At the same time, the Congressional Budget Office recently stated that raising the national minimum wage to $10.10 could reduce unemployment by 0.03% and help approximately 500,000 people.

These numbers don't add up. It seems highly unrealistic that one retailer -- Gap -- is capable of affected up to 90,000 people while raising the minimum wage to $10.10 would only impact 500,000 people overall nationwide. Either the Congressional Budget Office isn't predicting the numbers correctly or a minimum wage hike to $10.10 will have a very small impact on the economy.

As far as Gap goes, its recent minimum wage increase isn't political whatsoever. Gap launched its reserve-in-store initiative (allows customers to pick up items that were reserved online) well over one year ago, and to put it bluntly, Gap wants quality people to upsell customers when they visit the store. However, Gap's recent move hourly rate increase goes much deeper. As stated above, it wants to lock up the best talent in the industry.

The Foolish takeaway
Gap is taking the initiative. Companies like this tend to outperform their peers over the long haul. If you're the type of person who likes to bet with the more aggressive company, willing to go out swinging if it doesn't work out, then Gap might be for you. Please do your own research prior to making any investment decisions.