Investing is about much more than hearsay from your cousin's third uncle. There is a well-documented relationship between valuation and future long-term returns. If you focus on dependable companies with reasonable valuations, then you have a good chance of making profitable investments.

Start with the evidence
Analysts look at price-to-earnings ratios, rainfall, dividend yields, and other variables to forecast long-term stock returns. The simple one-year historical P/E ratio has some of the most robust results, explaining 38% of the variation in future 10-year stock returns from 1926 to 2011.

In the wake of the recent separation of upstream and downstream operations, many refiners offer attractive valuations along with future earnings growth. To understand refiners' valuations, it is a good idea to make adjustments in order to compare them to the broader market. Right now the S&P 500 index's P/E ratio is about 33% higher than the oil and gas refining and marketing industry's average P/E ratio. In order to compare individual refiners to the broad market, their P/E ratios are boosted to account for differences between industries.

Estimates of the broad U.S. market point to an annualized rate of return of around 5% when P/E ratios are around 17 to 20. After adjusting for the difference between the S&P 500 and the oil and gas refining and marketing industry, the majority of refiners have attractive valuations.

The small companies
HollyFrontier's (HFC) discount to bigger refiners like Phillips 66 (PSX -1.28%) and Valero Energy (VLO -3.76%) is somewhat warranted. HollyFrontier has a number of small refineries in the Midwest that give it access to cheap crude. Based on recent company estimates, a $1 decrease in the WTI-Brent spread would decrease full-year earnings per share by $0.51. There is reason to worry, however, as the WTI-Brent spread is around $10 and North America's midstream growth is slowly decreasing regional spreads.

Tesoro's (ANDV) high P/E ratio is partially driven by one-time issues pressuring its fourth-quarter 2013 earnings. Its Californian refining operations had to come down for a turnaround, and as a result it was forced to take a $15 million pre-tax inventory charge. Thanks to a number of infrastructure improvements, Tesoro expects that between Q3 2013 and 2015 it should be able to decrease its use of foreign crudes and make cost effective WTI 38% of its feedstock. The end result is that if you look at Tesoro's future, its high P/E ratio doesn't look too unreasonable.

Combine valuation with free cash flow
A good company pays for its operations, invests new capital, and still has money left over. Free cash flow shows just how much cash is left over at the end of the quarter, giving another dimension to our analysis. 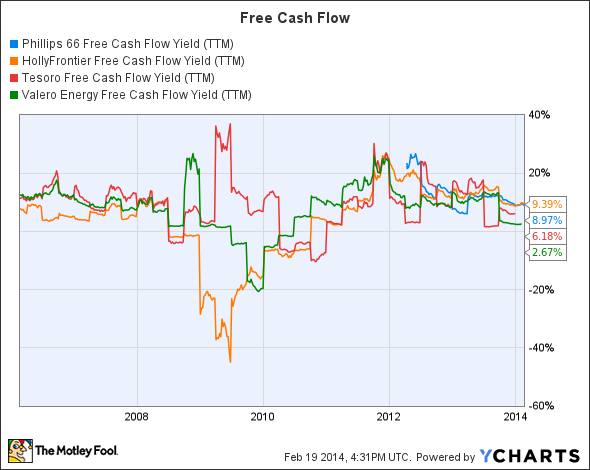 The above chart shows that even though the 2008 recession did have a big impact on HollyFrontier's free cash flow, the company was able to bounce back.

Building a refinery is very expensive. Environmental constraints and the not-in-my-backyard movement help incumbents by decreasing the threat of new entrants. Internationally the refining market is more competitive, but America's oil and gas boom means that U.S. refiners have significant cost advantages.

The big players
America is drilling for oil left and right, giving U.S. refiners a big advantage over many of their international peers. Phillips 66 has decided that it is going to put more than $3 billion into its Sweeny Fractionator One and Freeport Liquefied Petroleum Gas Export Terminal. These are big midstream projects that will help to grow Phillips 66's earnings once they come online toward the end of 2015 and mid-2016, diversifying the company's income.

Valero is also directing its capital expenditures toward interesting areas. In 2014 only 27% of its capex is for processing light crude. The majority of its funds are going toward investments in logistics to help it take advantage of cheap U.S. crude. Valero's adjusted P/E ratio of 13.5 is reasonable, it has a positive free cash flow yield, and it is growing.

Final thoughts
Refiners trade at reasonable valuations and offer steady growth. Valero and Phillips 66 are putting significant investments into midstream assets to help them take advantage of growing oil production. HollyFrontier and Tesoro are smaller operations with more upside potential, but you must be willing to accept HollyFrontier's exposure to the WTI-Brent spread or Tesoro's recently compressed earnings.