Why will Amazon’s box be better than competitors’ boxes, many of which use Netflix as a primary media source?

Rumors are not abating that Amazon.com (AMZN -1.44%) will be launching an OTT, or Over-the-Top set-top media box a la Roku soon.

Blog Re/Code, referring to its contacts who it says are partnered with Amazon, thinks Amazon's box will launch as early as March, and will use a tweaked Android operating system, similar to that on Amazon's Kindle Fire tablet.

One big question is whether the OTT device will double as a gaming console> Amazon reportedly acquired Killer Instinct game developer Double Helix Games earlier this month, leading to speculation about its gaming intentions.

What's different about it?

However, the bigger question is: what's going to differentiate Amazon's product in non-gaming media consumption terms, in other words: the core product.

Why will Amazon's box be better than competitors' boxes, many of which use Netflix (NFLX 1.09%) as a primary media source, for example?

Netflix, along with Amazon's existing service is carried on many existing OTT set-top boxes. 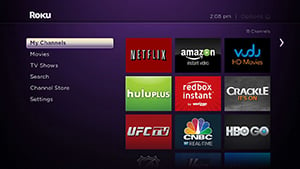 Roku's UI with its Netflix and Amazon tiles-Roku

Both Netflix and Amazon have been investing in original TV shows and both are working at obtaining exclusives. Amazon recently cut a deal to become the exclusive subscription streamer for MTV's Teen Wolf.

Amazon already has the exclusive on some popular dramas like PBS's Downton Abbey.

The answer is based on the difference between an on-demand delivery mechanism versus streaming delivery.

One reason that Amazon's selection of digital content appears more thorough than Netflix is that Netflix considers itself a programmer, rather than distributor—as Amazon does. Netflix also looks for titles that deliver the biggest viewership relative to the licensing cost. So, Netflix doesn't renew, or doesn't even bother with some titles that aren't watched much.

This doesn't apply to Amazon's overall video service. Amazon will rent you a television show or movie a la carte, over and beyond its Prime annual subscription model.

Because of that, even if you're looking for something obscure, you'll find it at Amazon, when you might not at monthly subscription-only Netflix. Netflix requires a recurring fee, but unlike Amazon has no additional a la carte offerings, and has no non-recurring fee options. Amazon doesn't require a Prime membership.

Another reason Amazon's product will be better, is that Amazon is also betting on combining its digital markets into a one-stop shop for consumers.

This model is particularly advanced in the UK, where Amazon has just merged and rebranded its LoveFilm video-on-demand service as Prime Instant Video. Digital renter LoveFilm was purchased by Amazon three years ago.

The package there includes film and TV digital rentals, the Prime free delivery service, plus borrowing of up to 500,000 Kindle books. Again, something Netflix can't offer.

It's a good bet that any future Amazon set-top box will follow this kind of all-encompassing digital model, where all Amazon digital offerings can be obtained in one swoop.

Cross-device communication is also something that Netflix can't offer. Amazon's set-top box will likely tie into its Kindle tablet: Order media on one device and consume it on another.

Notably Google (GOOGL -0.55%) is aiming along this multi-device path too, with its Second Screen functionality built into its tablets and Chromecast dongle.

Competing set-top box products, many of which already carry Netflix, and or Amazon Video options are from Sony (SONY -1.37%) who uses Google's TV-oriented Android version; Google itself with its Chromecast dongle and proprietary movie store; Internet networking products maker NetGear (NTGR 5.35%); Western Digital (WDC -1.09%), who is known for its hard drives; Roku and Apple (AAPL -0.34%) also with a proprietary store.