It's been several years since Intel first announced its intention to really play hardball in the smartphone arena. Will 2014 be the year that it finally gets traction?

For Intel (INTC 0.14%), the world of smartphones is a relatively new and difficult one. For many years, Intel's core competency has been central processing units, or the principal "brains" of a computer. This is something that Intel is truly exceptional at, as evidenced by the latest Haswell processors for PCs, Ivy Bridge-EP/EX for servers, and even the Silvermont processor core aimed at low-cost PCs, tablets, and phones. Unfortunately, while PCs and servers are driven mostly by CPU performance and power, the smartphone market is a different animal.

Yes, CPU matters, but so does a lot more
There is a need for faster and more power-efficient CPUs in smartphones, particularly as apps become more complex. This is why Apple (AAPL 1.55%) has invested so heavily in its own CPU cores for its A-series processors and why Qualcomm (QCOM -0.59%) designs its own custom CPU cores for its Snapdragon line of products. Intel, by virtue of experience and a manufacturing lead, has demonstrated that its low-power CPUs can match or exceed the best from the ARM camp on performance per watt. The "X86 myth" has long been busted. 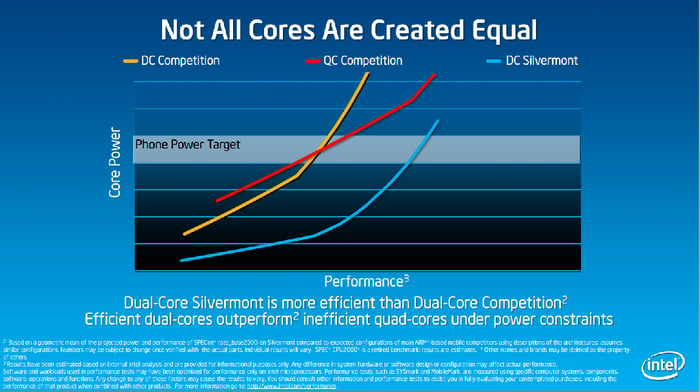 For the high-end market, integration isn't a big deal, as many flagship devices opt to use discrete modems/connectivity. But Intel, like every other apps processor player, has significantly lagged Qualcomm, which has been shipping LTE-capable products since 2011. That said, Intel has publicly stated that it is shipping its multi-mode LTE solution known as the XMM 7160 today, and that its second-generation, LTE-Advanced product would hit the market at some point during the first half of 2014. This, coupled with the upcoming Merrifield platform from Intel, should be enough for Intel to at least try to fight for some visible design wins.

Watch for announcements at Mobile World Congress
Many smartphone launches happen at Mobile World Congress, the biggest event of the year for mobile devices for both silicon vendors and device vendors alike. It will be very important for Intel shareholders -- and potential shareholders -- to watch what sorts of announcements come out of Mobile World from Intel's partners regarding Merrifield. From what was touted at the investor meeting -- 1.7 times the CPU performance of Clover Trail+, plus two times the graphics performance -- it should be a fairly compelling part for smaller phones, i.e., non-phablets, assuming the XMM 7160 modem is as good as it was billed at the investor meeting. 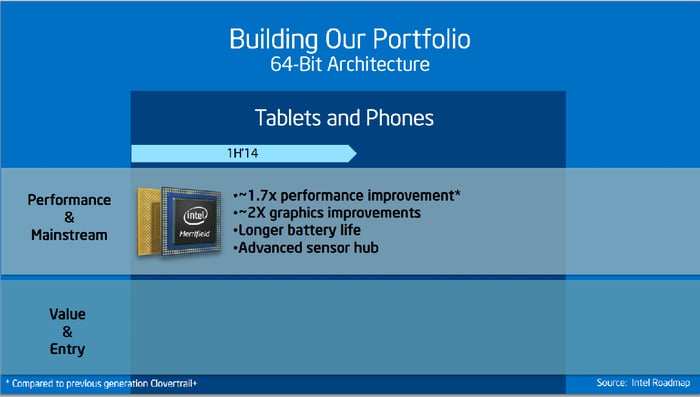 What kinds of phones could Intel potentially win with this part? Well, the larger phablets will likely use the Snapdragon 800, since it is likely to be faster. But smaller phones such as a Galaxy S5 mini, an HTC One 2 mini, and perhaps some Motorola phones would seem to be great candidates. If Merrifield is a first-half 2014 launch, this would coincide nicely with the projected 4G LTE ramp Intel gave at the same investor meeting: 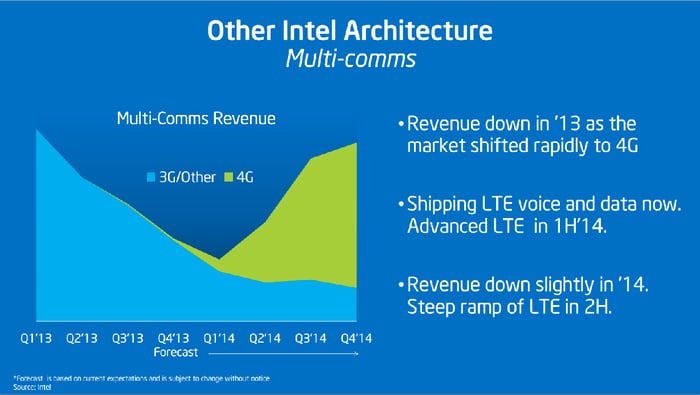 Foolish bottom line
It's probably not worth going into Mobile World expecting Intel to announce flagship design wins, but it is reasonable to expect that Intel has made some progress here. From an investment point of view, some progress when the world expects none could be enough to finally get Wall Street on board the mobile story after so many false starts and hopes. Keep your eyes peeled.