These 3 companies should be clear winners with increased exportation of natural gas.

Natural gas production is growing rapidly. Because of new drilling techniques like hydraulic fracturing, domestic supply has increased to a point where it is more profitable to ship LNG overseas than to sell it domestically. The current spot price for natural gas in the United States is $4.49 per million British thermal units whereas the spot price in Europe is much higher at $11.59/mmBtu. Further, having recently gone through a nuclear energy disaster, Japan is seeing natural gas spot prices of $15.58/mmBtu. American companies now look to take advantage of these price disparities. 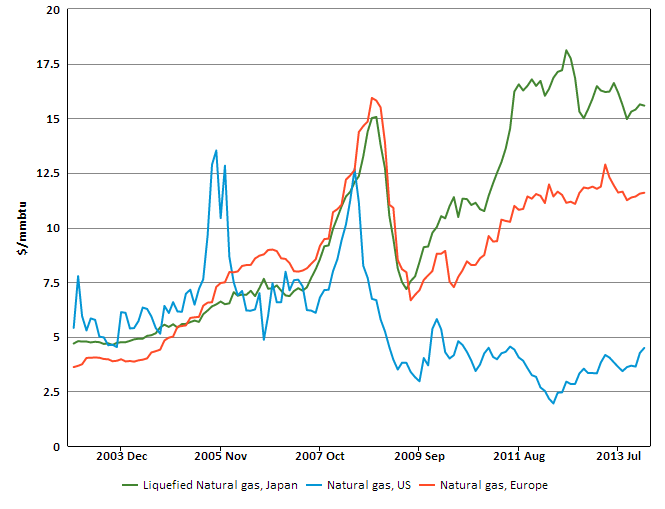 Because of this increase in exports, many companies along the supply chain will see increasing revenues for years to come. Three of these firms include Kinder Morgan (KMI -2.48%), Cheniere Energy (LNG -5.00%), and Teekay LNG Partners (TGP).

Kinder Morgan's tollbooth profits
Kinder Morgan is in the pipeline business. It makes money by operating as a tollbooth for natural gas. Fellow Fool Brendan Mathews describes the company's competitive advantage in this way: "Ownership of a pipeline is a tollbooth business. Once a pipeline is in place, competitors have little motivation to build competing capacity -- in fact, regulations forbid it without a 'demonstrated economic need.' As such, a pipeline is essentially a monopoly with prices set by regulatory agencies. Thus, Kinder Morgan has a very strong competitive position."

Kinder Morgan is the largest natural gas pipeline and storage operator in the United States with over 80,000 miles of pipelines and 180 terminals – most of them service natural gas production. Although Kinder Morgan's share price had a lackluster 2013 falling 2%, insiders are buying . Throughout the second half of 2013 and the first few months of 2014, top managers purchased over 1.7 million shares. Analysts anticipate Kinder Morgan's share price will rise once producers start to fulfill overseas demand.

Cheniere building capital and value
Because of the surplus of natural gas in the United States, Cheniere Energy is now in the process of restructuring its facilities to handle exports. Although the company's income statements don't appear appetizing, Cheniere is effectively building the value of its assets. From the end of 2012 to its last quarterly report in September 2013, Cheniere increased its assets from $4.6 billion to $8.1 billion (a 75.2% increase). The company is spending a large portion of its money building six liquefaction trains which will help convert natural gas to LNG and get it on ships to take it overseas.

Although the company has spent a great deal building infrastructure, Cheniere will see significant growth in the future. It has secured purchase agreements from six different companies located all around the globe in Korea, India, and Great Britain. Once all six trains are completed, these companies will buy 1.03 billion MMBtu of LNG (worth about $2.9 billion) annually for 20 years. The only drawback is that most of the ongoing projects won't be finished for several more years. The first train is projected to be finished in the beginning of 2016. The rest trains will be finished at successive six month intervals. Until then, Cheniere will be adding assets to its balance sheet and building value for its shareholders.

Teekay's stream of cash flow
Lastly, shipping companies who transport the LNG from America to other countries around the world will see large increases in revenue. One of these shipping companies is Teekay LNG Partners. With stable cash flows and increasing profit margins, Teekay is a well positioned firm that will reap massive profits from this increase in LNG exports.

Like Cheniere, Teekay's cash flow is predictable because it signs multi-year purchase agreements with its buyers around the world, which usually span between 10-25 years. The company owns 34 LNG carriers which service gas and oil companies around the world. Its LNG carriers have an average remaining contract life of 13 years, which equates to $5.9 billion in forward revenue.

Over the course of the past few years, Teekay has become more and more efficient in providing its customers with their shipments. The company's profit margin has increased dramatically over the past few years from 23.9% in 2009 to 35.47% in 2012. With revenue increasing and purchase orders in place, Teekay is set to see great growth over the next few years.

In a nutshell
The great difference between domestic natural gas prices and overseas prices will lead to an increased exportation of LNG. As this occurs, natural gas will be pumped through America by Kinder Morgan, converted to LNG and loaded onto shipping vessels by Cheniere Energy, and taken to its location by Teekay Energy's ships.