Please ensure Javascript is enabled for purposes of website accessibility
Log In Help Join The Motley Fool
Free Article Join Over 1 Million Premium Members And Get More In-Depth Stock Guidance and Research
By George Budwell - Feb 25, 2014 at 11:00AM

Biopharmas specializing in treatments for rare diseases, or orphan drugs, have been some of the best-performing stocks in the red hot health care sector. Although investors have been willing to pay notable premiums for earnings across the sector, this phenomenon has been particularly true among orphan drugmakers.

As larger pharmas like Shire seek to solidify their foothold in this niche market, we have seen an increasing number of mergers, acquisitions, and licensing deals taking place. It's thus no wonder that many orphan drugmakers are trading at steep premiums relative to their revenue.

In this biotech showdown, I compare two orphan drug specialists, Jazz Pharmaceuticals (JAZZ -0.71%) and Questcor Pharmaceuticals (NASDAQ: QCOR), that are 'cheap' compared to their peers, and ask which offers investors the best value. 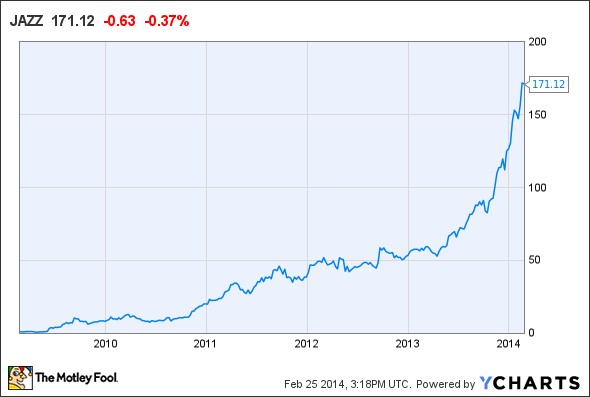 Jazz's incredible growth story centers chiefly around its flagship narcolepsy drug Xyrem. Xyrem accounts for approximately 60% of Jazz's revenue, and sales of the drug are expected to continue to grow over the next few years.

Adding fuel to the fire, Jazz's management bought Italian biotech Gentium for $1 billion last December to gain access to a rare liver disease drug called Defitelio. Defitelio is approved in the EU, but has had difficulty during regulatory reviews in the U.S., despite receiving both orphan drug and fast track status from the FDA. In addition to Xyrem and Defitelio, Jazz has nine other commercially available products. In sum, Jazz has an impressive roster of treatments for rare diseases that are projected to grow earnings by 4% to 6% per year for the next five years.

The one negative is that Jazz doesn't have a particularly robust clinical pipeline compared to some of its peers like Alexion Pharmaceuticals and BioMarin Pharmaceutical. Instead, Jazz's plan for growth appears to focus primarily on more M&A activity.

On the short-term horizon, Jazz is expected to report a 16% increase in net profits for the fourth quarter later today, with total 2013 revenue coming in around $1.05 billion.

The case for Questcor Pharmaceuticals
Shares of Questcor Pharmaceuticals have also had an impressive run lately, rising 152% in the past year. Even so, Questcor is perhaps the cheapest orphan drugmaker available, with shares trading at a measly 4.5 times revenue. The company's growth has been fueled solely by strong sales of Acthar Gel, Questcor's sole commercial product indicated for 19 different conditions. 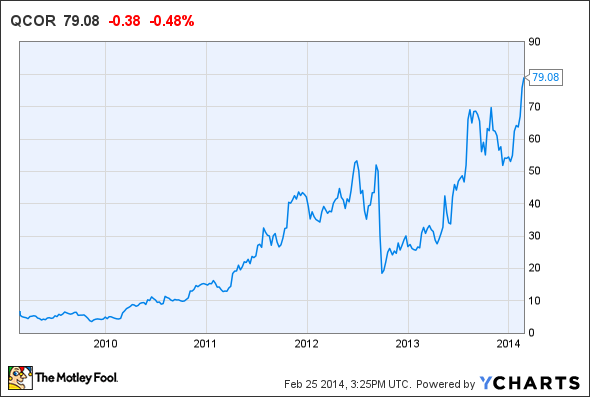 Why is Questcor so cheap? It's no secret in the biopharma world that Questcor is being investigated by multiple agencies for its marketing practices for Acthar Gel, and this investigation has clearly had a negative impact on its share price over the past few years.

Looking at Questcor from a fundamental point of view, you have to like what you see. Analysts expect 2013 revenue to come in around $955 million to $980 million when it reports earnings later today. And Questcor has already announced a quarterly dividend of $0.30 a share for 2014, giving the stock a yield of 1.60% at current levels. Earnings are also expected to grow 5% to 6% annually over the next five years.

Unfortunately, Questcor's fundamentals have long been eschewed by the market because of the ongoing investigation. And truth be told, Questcor's recent run has little to do with its fundamentals. By contrast, the stock's 40% year-to-date gain has been driven primarily by CEO Don Bailey's comments at a recent investor conference, where he suggested that the company could potentially acquire another orphan drugmaker, move to a country with a lower tax rate, or even go private. Today's earnings call will likely provide new details on its plans for the future.

Foolish takeaway
Orphan drugmakers seemingly become more expensive by the day, and it's rare to find a company trading for less than 15 times revenue. Jazz and Questcor Pharmaceuticals appear to represent some of the last remaining bargains among these highly prized companies, although their respective share prices are climbing.

In my view, Jazz and Questcor have strong potential to continue their upward trends, eventually trading closer in valuation to their peers. That said, Jazz clearly has less risk associated with it, but perhaps less upside potential as well. So, while I think today's showdown is a close call, Jazz wins, in my opinion, by offering investors a safer way to make money.