In the wake of Bristol-Myers selling its half of the two companies' diabetes joint venture to AstraZeneca in December, now is the perfect time to see if one may be a better buy than the other. 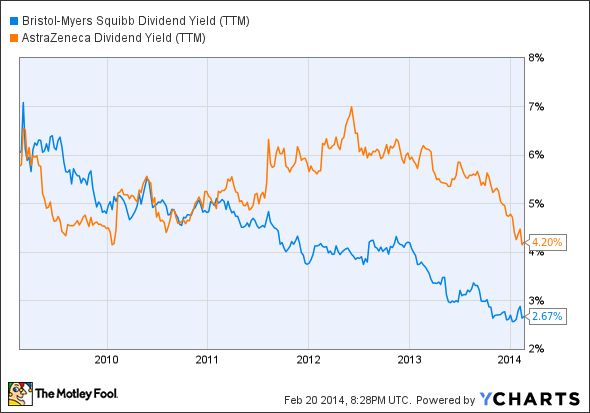 Dividend busting headwinds?
The ability to grow revenue and profit is vital to growing dividend payouts. That means that drug makers are at a disadvantage to other dividend-paying companies because they're continuously battling patent expiration on their best-selling products.

In 2012, Bristol lost exclusivity on its top selling cardiovascular drug Plavix. This cratered its operating margin and net income, forcing a major restructuring that ultimately resulted in Bristol's unloading its half of the diabetes joint venture to Astra. Sales of Plavix totaled just $258 million last year, down from $2.5 billion in 2012.

At Astra, the loss of exclusivity on its blockbuster drug Nexium this coming May and Crestor in 2016 pose a significant threat to the company's profitability as well. Nexium generated $991 million in sales last quarter, while Crestor produced $1.5 billion in fourth quarter revenue (both numbers assume constant exchange rates). Those key future patent losses make the 6% decline in Astra's global sales last year even more worrisome. Unfortunately, the resulting drop in earnings will limit the ability of both companies to return more money to shareholders.

Turning the freighter
To overcome patent headwinds, Bristol and Astra will need sales for current products to quicken.

Over at Astra, the blockbuster Symbicort is negating some risk. Symbicort generated $3.5 billion in revenue in 2013, up 10% from 2012.  Brilinta is also helping Astra given sales grew 216% to $283 million last year. Astra is also relying on growth in the newly unified diabetes lineup, which includes Byetta, Bydureon, Onglyza, and the newly approved Farxiga.

Advancing new products to market
If both companies hope to exceed pre-expiration peak annual sales, those existing products will need help from new drugs in their pipelines.

Fortunately, there are a couple of key compounds at Bristol that could start contributing to sales in the next year or two. One of them is daclatasvir, a hepatitis C drug that the company has already filed for approval in both Japan and the EU -- regions with a significant unmet need.

While daclatasvir probably won't be as successful as Gilead's Sovaldi, it has a good shot at becoming the number two player in the space, particularly given combining it with Sovaldi cleared the disease in a very high percentage (>90%) of patients during a Phase 2 trial.

Meanwhile, Astra has a robust drug pipeline, with more than ten drugs in phase 3 trials and 27 in phase 2. One of the most intriguing drugs in development is olaparib, a gastric and ovarian cancer compound that was repurposed following a failed mid-stage trial. Another interesting compound is brodalumab, which is being co-developed with Amgen (AMGN -0.67%). The two companies think that the drug could have potential as an alternative to Amgen's blockbuster drug Enbrel in psoriasis. If all goes well, Astra thinks it could file for FDA approval in 2015. 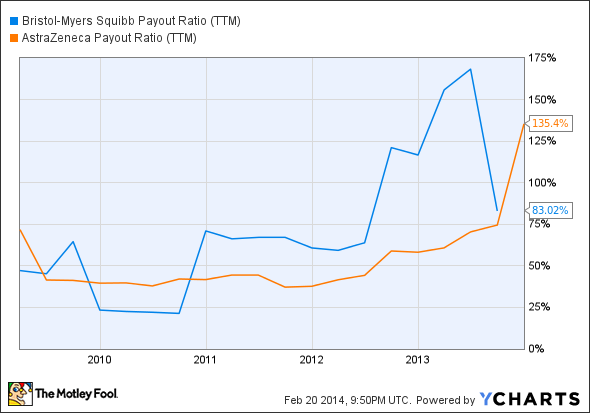 Fool-worthy final thoughts
Both Bristol and Astra are paying out a big chunk of their earnings as dividends, which means product growth and new products will be necessary for future dividend increases.

Of the two, Bristol may be better positioned to up its payout quicker thanks to improving profitability. Bristol's 2013 operating margin improved to 18% from 13% in 2012, while Astra's declined to under 15%. So, while Astra's dividend yield is higher than Bristol's, it may also come with greater risk. That suggests dividend investors should keep a close eye on the two company's pipelines and financial ratios this year to see if conditions improve or worsen.

Todd Campbell has no position in any stocks mentioned. Todd owns E.B. Capital Markets, LLC. E.B. Capital's clients may or may not have positions in the companies mentioned. Todd also owns Gundalow Advisor's, LLC. Gundalow's clients do not have positions in the companies mentioned. The Motley Fool has no position in any of the stocks mentioned. We Fools may not all hold the same opinions, but we all believe that considering a diverse range of insights makes us better investors. The Motley Fool has a disclosure policy.