Many investors overlook this aspect while holding a magnifying glass to company financials -- a mistake they would benefit from correcting.

Last year was excellent for Boeing (BA 2.01%) in many respects. The aviation juggernaut's stock price soared 77% last year, and its already massive backlog of orders surged to a record-high valuation of $441 billion. Boeing also made substantial progress on one of its biggest challenges, something that most investors and media folk overlooked. Here's the scoop on Boeing's underfunded pension status -- and how the company is tackling the problem at the root.

What's the big deal?
I believe one of the biggest problems with pension plans is that the obligation they represent is often skimmed over. Many investors are quick to notice a company's top-line revenues, bottom-line profits, cash hoards and debt levels -- but in the case of large companies like Boeing, its pension obligations are just as important. Consider that at the end of 2013, Boeing's total consolidated debt was $9.6 billion, yet its net pension liability was an even larger obligation at $10.4 billion.

What if I told you that was a huge improvement from the previous two years? 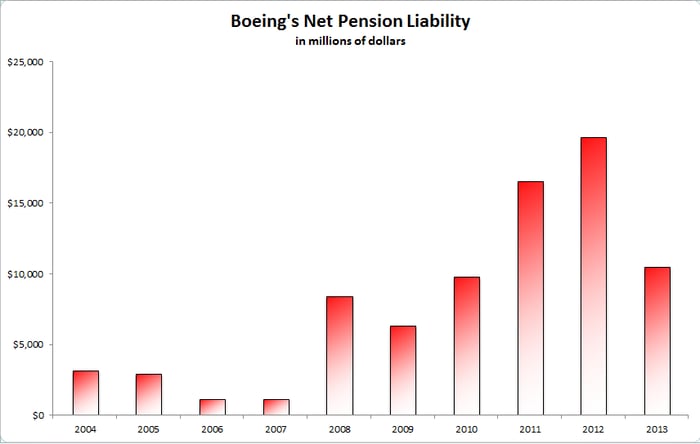 As you can clearly see above, Boeing's pension obligations have soared over the last 10 years -- much more wildly than the debt levels that most investors check consistently. Let's dig deeper to better understand why it fluctuates so wildly, and what we can expect from one of Boeing's largest challenges moving forward.

How does it work?
Pension plans are simple enough to understand from the 10,000-foot view. Pensions are promises from employers to pay their workers a defined amount after they retire. That's an obligation the company takes on and it is forced to predict what these payouts will total in the future. These obligation figures are determined by the amount of cash and assets the company has piled into its fund, and the expected rate of return for that fund. That part is easy, but the rest is a bit tricky.

Pension obligations change over time as discount rates, which are tied to interest rates, rise and fall. As discount rates fall, that means that the company's expected rate of return falls, and the amount Boeing must contribute into its fund to make up the difference rises. Even the life expectancy of employees with these future benefits is taken into account. So, what's the difference between Boeing's small obligation in 2007 and its massively underfunded status in 2012? Well, 2.4%, to be precise.

In 2007, Boeing's discount rate was 6.2%, and in 2012, it fell to 3.8%. A while back, Boeing estimated that every 0.25 percentage point decrease in the discount rate would equate to a $3.1 billion addition to its projected pension obligations.

With Boeing's obligations soaring of late, it leaves the company a handful of options to tackle this problem. Management can groan and change how it reports its earnings every year, which it has done. Boeing now reports GAAP figures, as it has in the past, and also "core" figures, which remove some of its pension expenses to better reflect its business amid wild fluctuations of its pension obligations. Boeing can also drastically increase its cash input to its pension plan to offset the rising obligation figure, which it has also done. 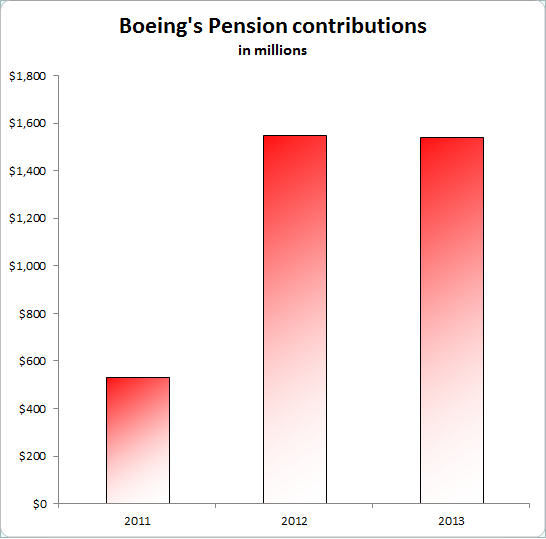 Boeing can also take advantage of both of those options and wait for interest rates, and therefore discount rates, to increase and reverse its pension obligation figures. Lastly, as investors should be thrilled to see, it can do all of those things and tackle the problem at its root: switching to a contribution style plan.

Leverage wins
For Boeing to tackle the pension problems at the root, it means switching from a defined pension style retirement plan to a 401(k) style contribution plan -- a move that would wipe massive future obligations from existence. Boeing has the ability to do this because it holds a lot of leverage with its valuable and highly sought-after jobs. Consider these two recent events that may spell the beginning of the end for Boeing's pension liabilities.

A couple of months ago, Boeing offered a contract extension to its Everett, Wash., plant that would guarantee many valuable jobs and the addition of its 777X composite wing production program. To receive this new production project, the union workers would have to agree to switch from a pension style plan to the 401(k) style plan. Initially, the workers rejected the new contract, but Boeing played hardball, and its leverage proved too much in the end -- the union eventually agreed to turn in its pension style plan for job security.

That story was repeated in the same fashion this week in St. Louis when members of the International Association of Machinists and Aerospace Workers District 837 approved a long-term-contract extension that will transition workers to a 401(k) style plan starting Jan. 1, 2016.

For Boeing and its investors, this appears to be the first domino falling in its plan to tackle its underfunded pension plan at the root. As Boeing's contributions rise, discount rates improve, and union workers switch to 401(k) style plans, you can expect to hear more about the company leaving one of its biggest problems in the past.