Please ensure Javascript is enabled for purposes of website accessibility
Log In Help Join The Motley Fool
Free Article Join Over 1 Million Premium Members And Get More In-Depth Stock Guidance and Research
By Beth Nichols – Feb 25, 2014 at 9:53AM

KitKat takes social sharing to a whole new level and earns recognition by Time as the most influential candy ever.

It's official. Time (TWX) has named Nestlé's (NSRGY -0.64%) KitKat the most influential candy bar of all time, touting its impact on not just the candy industry, but the world. "Give me a break," I exclaimed while reading the article. Influential? The world? Ever? That, to say the least, is a big deal.

Normally I take these biggest and baddest lists with a grain of salt, as most are the Internet's answer to grabbing our fleeting attention long enough to stay awhile. But this came from the same folks whose declaration of "Person of the Year" is annually prognosticated and anticipated, cheered and jeered. Time has some list-building, title-granting credibility, after all. Perhaps we've come a long way since Time rocked the world by 1982 choosing "the computer" over a person. But this isn't "of the year." This is ever. And it's a KitKat bar. Dang.

I pondered how a candy bar could be an influencer. On the micro level, it's easy. Picture: You are on one side of the room late at night, and you have a wobbly commitment to lose a few pounds. On the other side of the room: A bowl full of your favorite candy. You don't have to tell me where the influence is.

By and large, Americans have been on a trend to shun less healthy, more sugary foods and beverages, leaving companies like Coca-Cola (KO -1.11%) strategizing to fill the gap. While there has been a precipitous decline in soda consumption in recent years, not so for its sweet counterpart, candy.

It turns out that when attempting to lose weight, a majority of dieters will choose giving up chocolate as a last resort. They will add fruits and veggies, drink more water, exercise more, and even cut down on portion size, all before giving up sweets, according to a study by the National Candy Association. Now that's influence.

But you can't make s'mores with a KitKat

How, then, did KitKat take first place, trumping what many would consider to be the iconic candy of all time, the Hershey (HSY -0.70%) bar? (Hershey still gets a bump from this kudo, as it manufactures and distributes KitKat in the U.S., a deal it was grandfathered into when Nestlé purchased KitKat's founding company, Rowntree.)

Above all else, Time attributes its choice to KitKat's keen emphasis on sharing. From its easy-to-snap-apart design to its marketing geared toward giving some to a friend, it's a candy that's marketed all around being social. Which brings us to what may truly be KitKit's ultimate influential accomplishment.

They were burning the midnight oil at Google ...

Google's (GOOGL -1.40%) latest Android operating system was in line for a sweet "K" name. Most thought that "Key Lime Pie" would be the natural choice in the alphabetical line up to follow "Jelly Bean." Reportedly, developers were working on the project when KitKats in a nearby kitchen inspired the name idea. The deal between Google and Nestlé was consummated in no time, and the rest is history.

What followed has been a whirlwind of cobranding opportunities between Google and Nestlé, offering a huge boost to KitKat's global recognition. Meanwhile, Google's choice of a brand name over a generic name has ruffled some feathers, with worries that the Android brand has been somehow cheapened. Nevertheless the cobranded marketing pieces have been clever and entertaining, and the connection seems to fit. 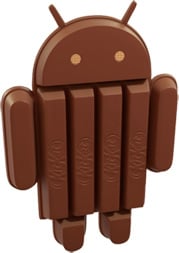 Ultimately, KitKat wins. For a brand that has built itself around being social, grabbing top billing on one of the world's leading social platforms, well, that is definitely influence. And the Time thing? Well, that's just plain cool.