With the X86 power myth busted, Intel tries to take the next step as a potential long-term winner in smartphones.

Ask anybody in the tech investment community just how good Intel's (INTC 2.46%) traction in smartphones is and you'll probably get the same answer: next to nothing. For years, many believed that the X86 instruction set was a barrier to low power chips (although there were many who did not – but it's hard to fight "conventional wisdom" without proof), although that myth was largely busted by Intel's last two smartphone platforms known as Medfield and Clover Trail+, respectively. With that in mind, it's important to understand the "next step" in Intel's smartphone strategy – partnerships with important OEMs. 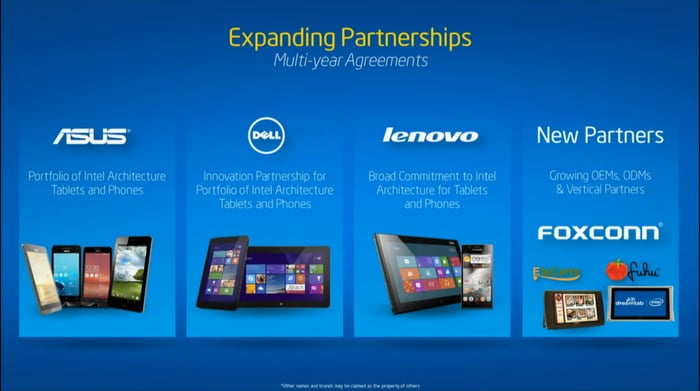 The most important partner on this list is likely Lenovo (LNVGY -1.18%) which is the fourth-largest handset vendor by market-share after Samsung and Apple, according to Strategy Analytics: 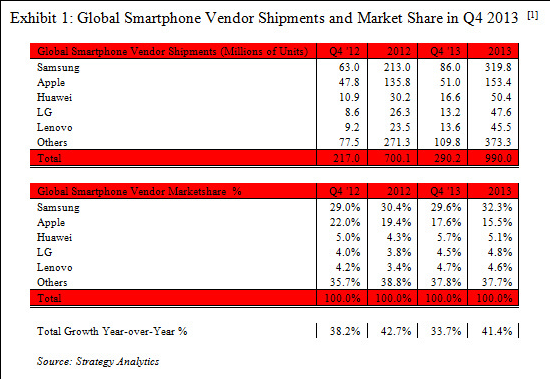 Indeed, while Lenovo has only 4.6% of the global smartphone market (which translates into about 46 million units per year assuming 1 billion smartphones shipped per year), the company's successes in PCs and servers, coupled with its very rapid growth rate in phones make it potentially a very valuable partner in the smartphone market. Such a deal isn't enough to grab Intel a big chunk of the smartphone market, but Lenovo, with Motorola Mobility in hand, would be a great start.

The ASUS partnership is interesting, too
Lower key, but still interesting, is the partnership announced with ASUS. ASUS is a major PC vendor (as well as PC component such as graphics cards and motherboards), but it – like many of its PC brethren trying to survive in the "post-PC era" – has been expanding into smartphones and tablets. The most notable success story in tablets for ASUS has been the Google branded Nexus 7 tablets, although it has introduced some other tablet lines that have had some moderate success.

ASUS actually announced a new line of smartphones under the ZenFone brand, all powered by Intel's last-generation Clover Trail+ line of processors. Given the launch of Merrifield and the XMM 7160 and XMM 7260 modems, ASUS is likely to update these products with this updated silicon and is likely to deploy them more broadly, particularly in regions where LTE is a necessity. ASUS is still a bit-player in phones, but with Intel behind it, it could grow up to be a much more powerful force.

What needs to happen next?
Take a look at the smartphone market share table above and notice something very interesting: LG (which doesn't design its own processors for mobile) also has nearly 5% of the market which suggests that if Intel were to strike a deal with LG, it – coupled with Lenovo/Motorola – would be able to fight for about 10% of the smartphone apps processor market. It's also not inconceivable, particularly given the strength of Intel's modem technology that Intel could end up winning some Samsung smartphone designs (particularly highly integrated/budget ones).

Indeed, at the same press conference today, Intel announced that Samsung would be a key partner for its XMM 7160 and XMM 7260 LTE and LTE-Advanced baseband chips (presumably paired with Samsung's Exynos SoC). It would stand to reason, then, that since Samsung would likely only target high-end tablets/phones with its own SoCs that Intel could aggressively attack lower-end phones once it gets its integrated apps processor + modem story together. Intel, after all, is likely to be the long-term No. 2 to Qualcomm as far as cellular basebands go, so it would make sense for Samsung to cultivate a long-term relationship with Intel for its phones, if only to keep Qualcomm honest. 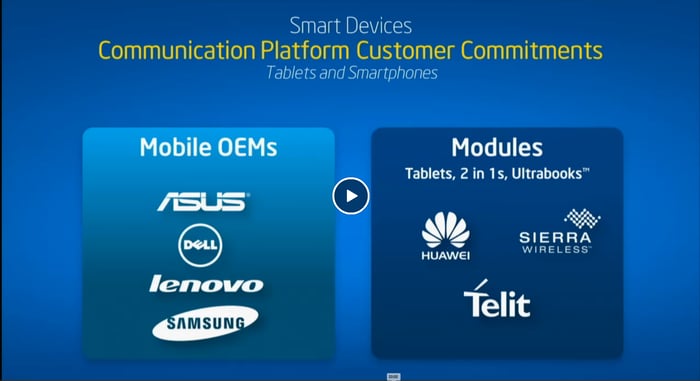 Interestingly enough, Intel's modem story is currently a lot more compelling than its apps processor story, but once the two are integrated, Intel could be very well positioned to gain share in the broader handset market. Of course, the battle is going to be long and difficult, margins will be terrible, and the competition fierce, but Intel really has no choice but to fight to win here as the future of computing is mobile. These types of strategic, long-term partnerships are a great first step and critical to Intel's long-term mobile success.