Please ensure Javascript is enabled for purposes of website accessibility
Log In Help Join The Motley Fool
Free Article Join Over 1 Million Premium Members And Get More In-Depth Stock Guidance and Research
By Tyler Crowe - Feb 25, 2014 at 9:30AM

With Occidental sending its California operations off on its own, is this new standalone business worth a look?

It looks as though Occidental Petroleum (OXY 1.75%) wants to follow in the footsteps of Conocophillips (COP 0.84%) and Devon Energy (DVN 1.54%). These two companies have basically reshaped themselves into new companies through billions of dollars in sell-offs, mergers, and acquisitions. In the past couple weeks, Occidental has announced that it too will make some fundamental changes to its business model. The most notable move is to spin off its entire California business into its own publicly traded entity.

New company, new opportunities
Unlike spin offs we have seen from others such as Conocophillips or Marathon Oil (MRO 0.28%) which split each company based on specific business segments, this move from Occidental is purely a geographical split. All operations that take place in California, regardless of whether they are upstream operations or processing facilities, will be spun off. The remaining aspects of Occidental, including its midstream pipelines and chemical divisions, will remain part of the existing company. The reason that Occidental has gone this way is because management believes that the California part of the business can do best as a stand-alone business.

What will make this spin off so unique is that California's assets are a very wide range of exploration and production activities. The new company will hold about 2.1 million net acres in the state and will be the state's largest oil and gas producer on a barrel of oil equivalent basis, but those millions of acres range from very mature oil fields to what could turn out to be the nation's largest shale oil play.

While the 15 billion barrels in the Monterey shale seems like an extremely attractive asset, it's still a very prospective play that may take several years to get a handle on. Thankfully, there are plenty of more certain production centers to generate cash in this new California business while it explores this new field. In 2013, unconventional exploration was only 25% of Occidental's $1.5 billion California budget. 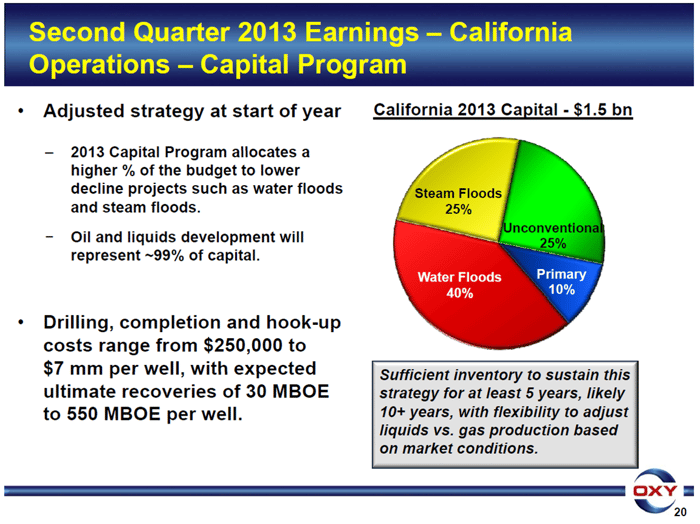 While this business may sound attractive because of its potential in the Monterey shale and the cash generation from its mature oil fields, there are some particularly challenging aspects that could hold this company back from realizing its potential. California has some of the strictest regulations for new wells, and the permitting process is extremely long. Also, there is the issue with California's struggle with extreme drought, which would make sourcing water for hydraulic fracturing of shale much more difficult than in more water-rich parts of the nation.

When the entire spin off is complete, the California business for Occidental will probably be valued somewhere in the $20 billion range, making it one of the larger independent oil and gas operators in the U.S. What is also encouraging is that initial estimates from Occidental suggest that the company will generate EBITA of $2.6 billion, which is more than enough to cover its 2014 capital expenditures. These numbers suggest that a dividend would be possible.

What a Fool believes
Occidental's spin off plans go against the grain of its competitors like Conocophillips and Marathon Oil, but it doesn't mean that it is a bad decision for the company. Occidental's California business has actually been a source of funds for the company to spend on other projects, like its capital-intensive projects in the Middle East and the Permian Basin, so letting it stand alone as its own company may give it a chance to grow at a slightly faster clip than in recent years. For the parent company, spinning off $20 billion on top of its $1.4 billion sale of natural gas assets in the Hugoton Basin will give the company a very large reserve of cash, which will more than likely be used to bolster its position in its core holdings in the Permian Basin.

This new business has the potential to be an attractive investment, but environmental regulations could make it difficult, and we are not completely certain what the capital structure of this new business will look like. It's probably best to wait and see until more detailed plans for the spin off are complete before considering it a buy.

The Motley Fool owns shares of Devon Energy. Try any of our Foolish newsletter services free for 30 days. We Fools may not all hold the same opinions, but we all believe that considering a diverse range of insights makes us better investors. The Motley Fool has a disclosure policy.