Are Cheniere and other companies operating in the liquefied natural gas market worth considering as investments?

Cheniere Energy (LNG 0.87%), a future U.S. liquefied natural gas exporter, kicked off 2014 on a positive note, as its shares have gained nearly 12% so far this year. The company's high expectations to start exporting liquefied natural gas are fueling its rising valuation. Moreover, the recent rally in natural gas prices may have also contributed to the rising share price. Given these developments, does the company's current valuation make Cheniere Energy an investment worth considering?

Natural gas market
The price of natural gas rallied over the past few months and reached its highest level in recent years, driven by colder-than-normal weather in the Northeast and Midwest along with low storage levels.

The chart below shows the normalized price of natural gas and shares of Cheniere Energy in the past several months. As you can see, the prices are correlated, especially over the past several weeks. 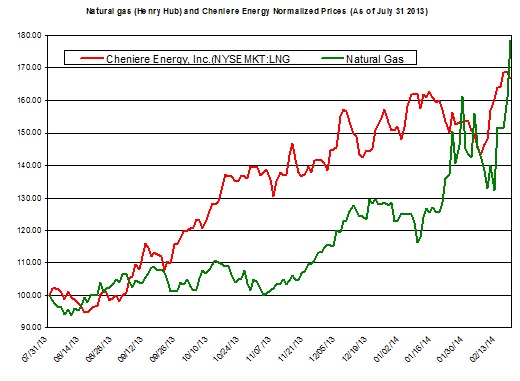 But the main risk Cheniere Energy faces is future changes in natural gas prices. Cheniere Energy has already reduced its risk related to its LNG exports by closing 20-year contracts to sell LNG for five out of its six trains in the Sabine Pass project, with the first project expected to start working in 2015. Even though these contracts are secured for 20 years, the price of LNG is still uncertain and will be based on the market price of the Henry Hub plus a fixed component.

Until Cheniere Energy starts exporting LNG, it will also have to face strong competition from other countries.

Strong competition in the LNG market
Qatar, the world's leading exporter of LNG, plans to boost its LNG shipments to Europe by 22% in 2014. Such contracts are likely to crowd out any new players from entering the LNG business in Europe in the near future.

In the meantime, other countries, including Australia and Israel, are expanding their LNG businesses with the help of leading oil and gas explorers. Chevron (CVX -0.15%) is expanding its LNG projects in Australia including its Gorgon project, which is almost 75% complete. The company plans to start extracting gas in mid-2015. Its Wheatstone project has recently reached construction and LNG marketing milestones. This project is expected to start producing LNG by 2016. In 2014, the company plans to further increase its capital expenditures as Chevron moves close to first production.

Israel is another country that is slowly increasing its natural gas production: Israel has several offshore caches of natural gas. Noble Energy (NBL) is one of the companies that will cash in on these explorations. The company holds 36% in the Tamar project. Furthermore, the company recently announced an agreement to sell natural gas from this project to energy companies in Jordan. The current estimates are that this agreement will generate gross revenue of $500 million. The U.S. LNG business isn't the only one progressing.

Takeaway
The liquefied natural gas market is likely to keep growing as the demand for energy shifts from coal to natural gas. But the progress of other countries such as Australia and Israel in natural gas exploration could loosen the LNG market in the coming years and put some pressure on natural gas prices. Therefore, I still think the sharp rise in Cheniere Energy's valuation might not reflect the current direction of the LNG market.

Lior Cohen has no position in any stocks mentioned. The Motley Fool recommends Chevron. Try any of our Foolish newsletter services free for 30 days. We Fools may not all hold the same opinions, but we all believe that considering a diverse range of insights makes us better investors. The Motley Fool has a disclosure policy.