Learn about the challenges that King will face after its IPO, and what the company could learn from Zynga and Glu Mobile.

King Digital Entertainment, the company responsible for the development of Candy Crush, has recently filed for an IPO, planning to raise $500 million. Founded in 2002, King has operated for more than a decade. However, it only became well-known after 2012, when the company released Candy Crush. The game quickly became a hit both in mobile devices and the Facebook platform. This allowed the company to improve its top line quickly: From 2012 to 2013, the company increased its revenue from $164.4 million to $1.88 billion. Profitability also improved, as King saw an increase in net profit from $7.8 million to $567.6 million.

Looking forward, the ability of King to replicate the success of Candy Crush will prove essential for the future of the company. King, which experienced a decline in revenue from $621 million to $602 million in its latest quarter, needs to show investors that it can develop hits on a consistent basis, especially nowadays that the company is also experiencing a decrease in monthly unique payers, which suggests Candy Crush may be losing momentum. The company, already a strong competitor to Zynga (ZNGA) and Glu Mobile (GLUU), will raise a good amount of capital, which may be used to acquire promising studios, support new development projects, or increase marketing expenditure. What is ahead of King's initial public offering? 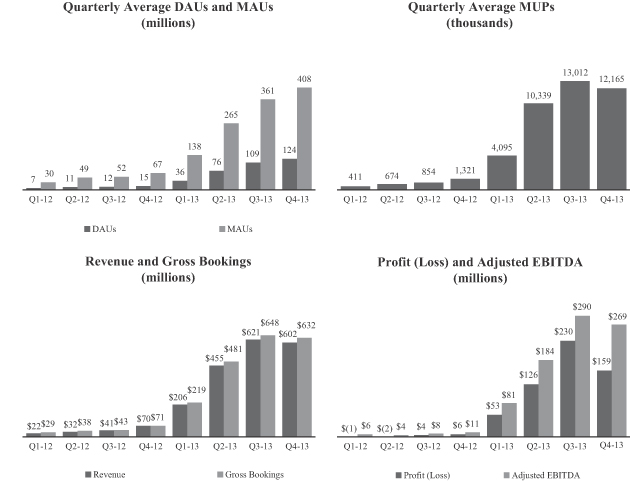 A "hit-or-miss" business
The mobile game industry is often portrayed as a hit-or-miss business. Game developers face constant pressure to produce "the next big hit." Unless they consistently develop new hits, their successful games will eventually start losing monthly active and paying users, which will lead to less revenue. No matter how famous a game is, eventually its user base will start decreasing. Some famous examples include World of Warcraft, developed by Activision Blizzard, and the Farmville series, developed by Zynga.

Lessons from Zynga and Glu Mobile
A major concern regarding King's IPO is whether the company will end up like Zynga after it went public. Zynga's stock price drastically fell from about $14 to nearly $2 in 2012, as investors became aware of the decreasing revenue coming from Farmville. More important, the company was not able to produce a replacement to Farmville. Glu Mobile, which went public on 2007, also saw its shares fall, from a record $13 level to $2.20 in July 2013.

That being said, King has consistently made money since 2005, which was before the release of Candy Crush. This suggests that King's current management is doing things properly.

The mobile segment
Nowadays, practically all games publishers are interested in the mobile segment, motivated by the success of Candy Crush and other famous hits. For example, Zynga -- originally a publisher of games for the Facebook platform -- is trying to improve its top line by focusing on mobile. As a result, its shares have gone up more than 20% since early January. The company recently acquired Natural Motion, a famous mobile gaming studio, for $527 million in cash, and could be one or two good games away from doubling or tripling its stock.

As competition increases in the mobile gaming segment, King could diversify its revenue by producing games for other platforms, like consoles. Notice that the company is already developing games for the Facebook platform.

Final Foolish takeaway
Despite King's current success in the mobile gaming world, it's worth noting that most of its revenue come from a small number of games, and that the company is quite reliant on Candy Crush.

Notice that both Zynga and Glu Mobile saw a decrease in their stock price after going public, as investors worried about the ability of the companies to consistently develop new hits. To avoid disappointing investors, King will need to show them it can go beyond Candy Crush, and become a consistent publisher of revenue-generating titles, not only for the mobile platform, but also for consoles, PC, and Facebook.

Why Salesforce Stock Slumped on Friday
376%