RNAi is a new biotech technology investors need to watch.

Sometimes the best way to get started in biotech investing is to analyze specific technologies within the industry. The science and our knowledge of how diseases work is constantly evolving, and every now and then breakthroughs take place which inspires companies to explore new therapeutic targets. Most times, the hypothesis that certain technologies are simply too immature to commercialize. For example, look at the genomics boom back in 1999 and 2000. When  the federal government and Celera Genomics decoded the human genome, investors bid up shares of any biotech associated with genetics. Most were busts, as the basic science was way ahead of applications.Today, there are now commercial applications for genomics. Companies like Illumina are banking off of that trend as both private companies and research organizations buy their gene sequencing machines.

So, what are the major trends today that investors can bank on? One that I would like to discuss is RNA interference, or RNAi for short. RNAi has a long history of over promising and under delivering, not the formula that an average investor would like to see. Recently though, stocks associated with RNAi have taken off. Perhaps through a combination of being out of favor, displaying new breakthroughs that show actual promise in clinical trials, and validation by large pharmaceutical firms in the form of partnerhships, RNAi has been one of the hottest areas in biotech lately. RNAi holds a tremendous amount of promise in multiple disease areas, including genetic disorders and cancer, so the potential is there.

If you truly want to see some eye-popping charts, just look at what a select few RNAi stocks have done versus the Nasdaq Biotech Index over the last twelve months. 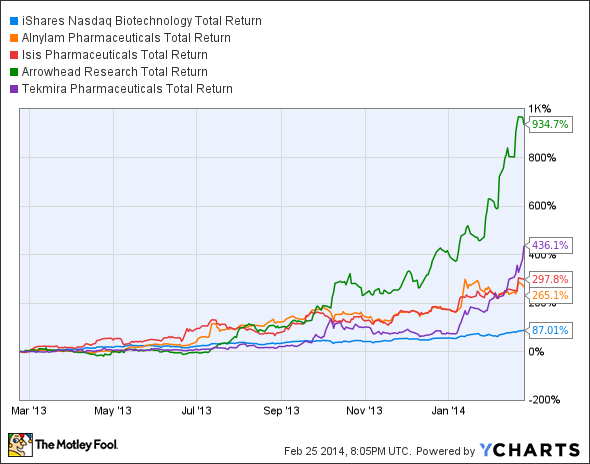 So What is Going on with RNAi?
RNAi has seen a confluence of positives over the past several years to really help it take off. You could say that its ultimate validation came in 2006 when scientists Andrew Fire and Craig Mello were awarded the Nobel Prize in Medicine for their discovery of "RNA interference – gene silencing by double-stranded RNA." While development of drugs has been slow, real progress has been made recently.

Last week, for example, Isis announced results from a small phase 2 study in infants with Spinal Muscular Atrophy, which is caused by a genetic defect in the SMN1 gene. According to the SMA Foundation,

"SMN protein plays a critical role in the survival of special types of nerve cells in the spinal cord called motor neurons. Motor neurons are responsible for controlling muscle movement, and when there is not enough SMN protein produced, these neurons become sick and have trouble sending signals to various muscles, making muscles become smaller and weaker over time."

ISIS presented data last week that showed a dose and time-dependent improvement in muscle function in infants on the drug. SMA children in the 3 mg, 6 mg and 9 mg cohorts achieved mean score increases of 1.5, 2.3, and 3.7 points, respectively, in the Hammersmith Functional Motor Scale-Expanded (which measures muscle function) nine months following the first dose of ISIS-SMN. Based on these results, Isis intends to launch a phase 3 study later this year. If successful, this could be a blockbuster drug with $1 billion or more in sales. Isis is partnered with Biogen Idec (NASDAQ: BIIB) on this program.

Next, let's take a look at Alnylam. Alnylam recently signed a major deal with biotech heavy-weight Genzyme, a subsidiary of Sanofi, in which Genzyme bought $700 million worth of Alnylam's stock for an approximately 12% ownership stake. In return, Genzyme acquired rest-of-world rights (outside of US and Western Europe) to Alnylam's 5x15 genetic programs, which include drugs for rare disorders such as familial amyloidotic polyneuropathy (FAP), hemophilia and rare bleeding disorders, hypercholesterolemia, and others. Alnylam's 5x15 program was designed to have 5 drugs in the clinic by the end of 2015, and as updated in early 2014, the company expects to have six to seven genetic medicine product candidates in clinical development -- including at least two programs in Phase 3 and five to six programs with human proof of concept -- by the end of 2015. This validation by a larger biotech firm is a great thing to see when determining if a certain drug or technology has merit.

In addition to Isis and Alnylam, check out the small-cap stocks that also are developing drugs in this space, Arrowhead Research and Canadian company Tekmira Pharmaceuticals. Arrowhead has been getting a lot of attention recently for its development of RNAi therapy for the treatment of hepatitis B, which is a major problem especially in Asia. Their early pre-clinical studies showed a lot of promise, but they have yet to announce ground breaking results in humans. Their drug, dubbed ARC-520, is planning to move into phase 2 studies this year and once completed, investors will have a much better picture as to the drug's efficacy.

Likewise, Tekmira is also up significantly year to date as investors applaud the company's unique drug delivery capabilities. Tekmira also announced last week that it plans to raise up to $150 million through an equity offering. That news sent Tekmira's shares down last Friday to $18.50, but it has since recovered to new all-time highs. Last but not least, most investors know that there have been a flurry of IPOs in the biotech space, but one of the top performers so far is in the RNAi field. That company, Dicerna, priced its IPO at $15 on Jan 30th and closed the day $46, a gain of 206%. It currently sits close to this high at $43 as I write this article.

Needless to say, the RNAi field has been red hot. Should we continue to see positive data and deals, this upward trend will likely continue. However, it should also be noted that the entire biotech industry has been on a tear over the last few years. With valuations (and expectations) high throughout the sector, missteps from companies in this space or poor clinical trial results could result in the sector cooling off.