Arthur Chu is making big money on the game show "Jeopardy!" And he's doing it with three tactics that would serve you well as an investor, too.

Arthur Chu is not your average Jeopardy! champion. He thrashes the buzzer like a berserker, doesn't pick his clues down one column at a time, and often looks like a robot (in rumpled clothes) while playing the game. Sometimes, he bets just enough on Final Jeopardy! to clinch a tie -- not an outright win.

You know what's even cooler? Chu built a winning strategy with investing lessons worthy of Warren Buffett or George Soros. He's doing three crucial things that you can take to the stock market and build your own market-beating winning streak.

Keep emotion out of the game
If Chu seems robotic, it's because he's playing Jeopardy! to win. More specifically, he's in it to win as much money as possible. This is a crucial distinction that I'll revisit later.

He came into the game prepared to the teeth. It wasn't all about studying world capitals and American presidents. Chu took the next step that most contestants fail to perform: he had a plan and a playbook.

Picking questions and betting on Double Jeopardy squares are important decisions in the game. But most contestants make them on the fly, under the hot studio lights, with Alex Trebek pushing them to keep the game interesting and with the gravity of big-money winnings weighing on their shoulders.

Not Chu. As he told The A.V. Club in a recent interview, he figured out how to avoid all that game-breaking drama:

I told myself, "I'm not going to make these decisions. I'm going to outsource my decision making to the experts. I'm going to write down a playbook. I'm going to come up with some scripted plays and just discipline myself and say this is exactly what I'm going to do in the game. And I will not have to think about making those decisions. That part will be automatic, and I can use all of my brain cells to know the answers because that's what I need them for."

Chu is human and didn't have all eternity to draw up that playbook, but he's doing his best to stick to the plan and it's paying off big time. Perfection is impossible, but having a plan at all is crucial. "Not having a strategy and having to make decisions on the fly can really harm you," Chu said.

Jeopardy! legend Ken Jennings would agree -- stick to your playbook if you want to keep smiling. Source: Wikimedia Commons.

It's the same thing in the stock market. Emotion has no place in investing, and planning is crucial. I love Netflix (NFLX -2.25%) and am making good money on that stock these days. But I have a simple investment thesis -- Netflix is making a land grab in digital entertainment and nobody dares to challenge the company's ultra-efficient business model head-to-head -- and I'd cash in my chips if Netflix ever stopped fitting that bill.

The Qwikster debacle came close, until CEO Reed Hastings realized his error and changed course again. Rather than selling out of this massive opportunity, I ended up buying more shares while they were cheap -- and Hastings' mistake had already been corrected.

Make sure you have an investment thesis for every stock. Feel free to modify it when business conditions change, but never forget why you own that stock in the first place. And no, "I love this company!" is never a good investment thesis. Emotions and investing just don't mix.

Don't cry over spilled milk
If you want to beat the Dow Jones industrial Average (^DJI) you have to be ready for the occasional mistake. Arthur Chu doesn't get every question right, and Warren Buffett doesn't nail every investment. The Dow itself gets its apparent stability from rolling with the punches. Of the blue-chip components 20 years ago, only 16 remain in the Dow. Some were simply replaced by stronger names; others merged their way out; and a few unfortunate Dow companies have even filed for bankruptcy.

But the Dow still generally rises, with the occasional speed bump along the way: 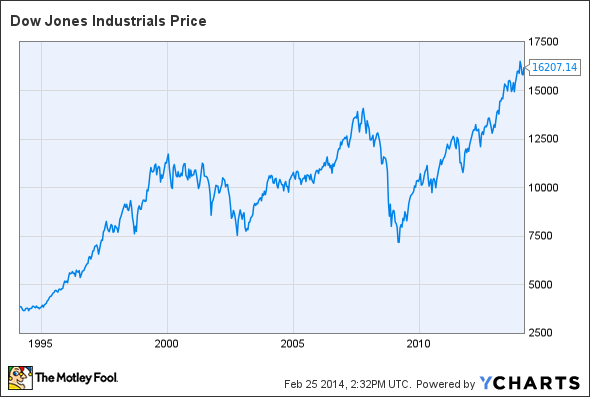 Chu wants the Double Jeopardy squares because that's where the big money is made. But you'll never see him go all in on one apparent gimme category, because he knows that there's always the risk of losing everything.

That's also why you shouldn't go all in on one stock. Netflix could be the next Enron, gone overnight in a scandal that nobody saw coming (least of all me). So Netflix may be the cornerstone of my long-term strategy, but it's never the only stock I own. In the long run, the Dow's big winners more than make up for the occasional loser. Diversify your portfolio and you'll see the same effect playing to your advantage.

The best way to get rich slowly is to draw up a solid playbook (see above!), and then start an automatic investment plan based on that.

Play to your strengths
Remember that thing I asked you to keep in mind just a few paragraphs ago? Chu isn't just playing to win one game. Instead, he's maximizing his chances to win as much money as possible, which sometimes means playing the endgame for a tie. Arthur loses nothing on tying the game, since both winners get to keep their prize money and then come back for the next game. There's solid game theory behind acting this way, and just another tool in Chu's toolbox.

He's using every trick of the trade. Running down clue categories in sequence might make for better television, but jumping around keeps his opponents off-guard and less prepared for what's coming next. It's not a big advantage, but every little bit helps.

That playbook includes guidelines for finding Double Jeopardy squares and then making the most of them. But not by betting the maximum every time. Like a seasoned poker player, Arthur Chu knows when to hold 'em, knows when to fold 'em, and knows when to walk away with a measly $5 bet. That's all part of maximizing your winning chances. Ask any professional poker player what the game is all about, and you'll get a solid lesson in statistics. Jeopardy! Is no different -- and neither is investing.

The way to stay ahead of the investing game is to stick with what you know. Like Arthur Chu betting big on categories he knows well and wimping out of harder questions, you must know what you're good at and stick within your field of expertise.

I mean, everybody loves value investing. Maybe that's your forte, dear reader, but not mine. My retirement portfolio is built on growth stocks, with Netflix the flagship of my fleet. Value bets are not completely off-limits to me, and it makes sense to take small bites when you want to learn something new. But I leave most of my value plays to the CAPS system, where there's no real money on the line.

In my real-money retirement portfolio, I'm a coldhearted growth investor because that's what I do best. This maximizes my chances to beat the Dow in the long run, just like Arthur Chu reaping the cumulative benefits of several small advantages. Maybe you're a dividend hound instead, or a value bloodhound, or you might have unique insights into what makes small-cap start-ups tick. Invest accordingly.

Keep investing like Arthur Chu!
Nobody knows whether Arthur Chu will beat Ken Jennings' 74-game winning streak or Brad Rutter's $3.5 million money record. And nobody knows if you or I will crush the Dow in the long run.

But as long as we keep playing to our advantages, minimize our risks, and stick to a sensible playbook, we all have a good chance of getting it done.