If you're caring for someone with Parkinson's disease or Alzheimer's, you should be watching Acadia Pharmaceuticals (ACAD 2.74%). Acadia plans to file its novel compound for Parkinson's psychosis, or PDP, later this year, a move which could significantly change how patients are treated.

Last year, the FDA agreed to consider the use of just one late stage study as the basis for approving Acadia's new drug, pimavanserin. That news sparked a rally in Acadia's shares, resulting in Acadia being among last year's best performing biotechs. 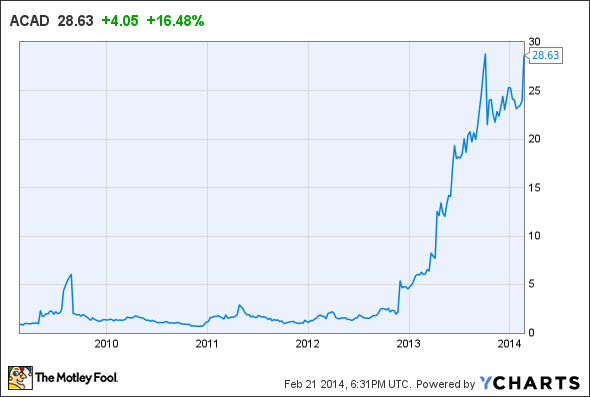 Why is this drug better than anti-psychotics?
Doctors treating PDP are stuck in a tough spot. They can use currently available anti-psychotic medication off-label; however, those medications possess black box warnings against use in elderly patients. Or, they can opt against treating the hallucinations and delusions recognizing the decision may speed patients more quickly into institutional care. Sadly, both choices could have significant impacts on patient morbidity.

Another drawback of using anti-psychotics in PDP patients is that they are designed to block dopamine receptors. However, those receptors are key targets of current Parkinson's treatments like generic Levodopa -- marketed by drugmakers including Mylan (MYL) -- that boost motor control by manipulating the amount of dopamine in the brain. As a result, prescribing anti-psychotic drugs can effectively reduce Levodopa's benefit.

That suggests doctors may welcome pimavanserin with open arms. The drug not only lowered the number of psychotic events in trials, but its different mechanism of action showed it didn't interfere with Levodopa either.

Anti-psychotic medication isn't recommended for use in elderly patients prone to the disease, and may increase mortality; however, not prescribing them could mean patients move more quickly into nursing homes.

So, Acadia is advancing pimavanserin through mid stage trials designed to determine whether the drug can successfully reduce psychotic events in Alzheimer's too. If the company's phase 2 trial is a success, it will launch into phase 3, and since the FDA has already indicated a willingness to consider a filing without multiple late stage studies for PDP, the company believes it will take a similarly favorable stance for ADP. That means less money spent on trials, and a quicker path to market.

How big is the need for this treatment?
Both PDP and ADP affect significant populations, without approved medications. Up to 40% of the 1 million Parkinson's patients in the U.S. will develop PDP and as many as half of the 5.4 million Alzheimer's patients may also be diagnosed with ADP during their lifetime.

Since so many of those patients will develop psychosis, and given there aren't any approved treatments for those that do develop it, it appears there may be a significant unmet need. Whether Acadia can tap into that need and produce enough sales to justify its current $2.6 billion market cap remains to be seen; however it isn't beyond possibility that an approval of pimavanserin would make the company attractive to a larger company, particularly to one of the makers of the anti-psychotics it seeks to displace. Regardless, Acadia remains a developing and speculative play.

Todd Campbell has no position in any stocks mentioned. Todd owns E.B. Capital Markets, LLC. E.B. Capital's clients may or may not have shares in the companies mentioned. Todd also owns Gundalow Advisor's, LLC. Gundalow's clients do not have positions in the companies mentioned. The Motley Fool has no position in any of the stocks mentioned. We Fools may not all hold the same opinions, but we all believe that considering a diverse range of insights makes us better investors. The Motley Fool has a disclosure policy.