After delivering a great set of results last week and paying record dividends for 2013 unlike peers, is CVR Partners destined to head higher?

While investors in fertilizer companies have had little to rejoice in several months, CVR Partners (UAN 3.60%) is treating its investors to some good times. CVR's stock surged 12% last week on two big pieces of news. The company delivered a great set of numbers for its fourth quarter, and ended up paying record dividends to shareholders for 2013.

Just a week back, peer Rentech Nitrogen (NYSE: RNF) nearly halved its 2013 dividends, while Terra Nitrogen (NYSE: TNH) distributed roughly 42% lower dividends for the financial year 2013. Given that all three companies are similarly structured as master limited partnerships and each primarily deals in nitrogen fertilizer, what is working for CVR Partners that isn't for the rest? More importantly, is this rally short-lived or has CVR become the best fertilizer MLP?

What did the numbers say?
Even as most fertilizer companies saw their sales dip during the last quarter, CVR Partners' fourth-quarter revenue climbed 25% year over year. More notably, its net income surged an astounding 82%, backed by lower operating expenses.

So the company is not only generating higher revenue from the same nitrogen fertilizer that Rentech or Terra or even CF Industries (CF 1.92%) deal in, but also appears to be controlling costs well. So how's CVR pulling it all off? It's a tale of two factors: product mix and input used.

The secret to CVR's growing revenue and profits
Nitrogen is primarily sold in one of the three forms -- ammonia, urea, or urea ammonium nitrate (UAN). Of these, UAN solution is traditionally a premium product, and thus generates better margins than the other two compounds. 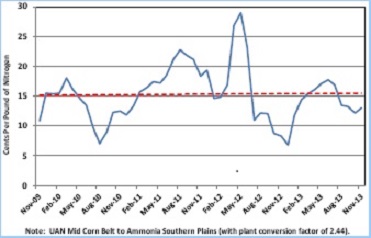 Now if I tell you that CVR Partners is a UAN specialist, and has started converting nearly all of the ammonia it produces into UAN (every ton of ammonia gives 2.44 tons of UAN), you'll know the secret behind CVR's expanding bottom line.

During the fourth quarter, CVR produced record amounts of UAN, thanks largely to the 50% additional capacity that the company bought online last year. Now, consider this: While CVR's Q4 prices of ammonia dropped 29% year over year, UAN prices were only 8% lower. Naturally, converting ammonia to UAN proved a smart strategy.

Wondering why peers aren't exploiting the UAN advantage? That's not the case. UAN made up roughly 84% of Terra Nitrogen's total sales volumes in its fourth quarter, while both Rentech and CF maintained a near 50/50 balance between ammonia and UAN sales in their respective last quarters. But these companies still get a portion of revenue from other nitrogen compounds, unlike CVR which has almost turned into an all-UAN company. So there's a reason why CVR chose UAN as the ticker symbol for its shares.

Unique competitive advantage
The second, and perhaps the most important factor that sets CVR Partners apart from other nitrogen companies is its unique input advantage -- CVR is the only North American company that uses petroleum coke instead of natural gas to produce nitrogen fertilizer. And everyone knows how volatile natural gas prices can be.

More dividends for you, or...
Going forward, CF Industries projects UAN prices to remain firm as the U.S. spring planting season approaches, which bodes well for CVR Partners. And as long as the company's profits grow, investors can expect bigger dividends. But there's a catch -- CVR is currently paying out more than it can afford. Its free cash flow payout ratio (how much of its FCF goes out as dividends) for the trailing 12 months was an alarming 197%, which means the company is paying nearly double the cash flow it generates as dividends. That's unhealthy and unsustainable.

The Foolish bottom line
CVR Partners could be headed for another strong year given the firm demand for UAN. But the stock price hasn't quite matched up, and investors may brace for further volatility. That's because dividends are the greatest attraction for an MLP, and unlike in previous years, CVR decided not to give dividend distribution guidance for 2014. That's good in a way, considering that the company miserably failed to meet its own projections for 2013 thanks to weak nutrient markets and sudden plant outages.

That said, CVR Partners shares are trading fairly cheap at 12 times earnings for a dividend yield of 8.7%. The company looks like one of the better fertilizer MLPS out there, and you many want to keep an eye on it.

Neha Chamaria has no position in any stocks mentioned. The Motley Fool owns shares of CF Industries Holdings. We Fools may not all hold the same opinions, but we all believe that considering a diverse range of insights makes us better investors. The Motley Fool has a disclosure policy.