The recent deal between Apple (AAPL -2.12%) and China Mobile (CHL) will result in incremental sales of 17 million iPhone units annually, according to FBN Securities. This will, of course, boost the top line of both the companies. In addition, Electronic Arts (EA -0.45%) stands to benefit from the arrangement. Does it deserve a place in your portfolio? Let's find out.

Reason for optimism
Apple and China Mobile have been trying to ink a carrier deal for the last six years, but the companies failed to find common ground, and the agreement repeatedly fell through. Last December, however, the much-awaited deal was finally struck.

Last month, China Mobile -- the world's largest wireless telecom company with about 760 million subscribers -- began selling the iPhone 5s and 5c throughout its retail store network in China, opening a new growth avenue for both companies.

AppleInsider estimates that Apple sold about 2 million iPhone units to China Mobile subscribers in January. The wireless carrier seems to have benefited as well, as its 3G subscriptions increased 7.4% in the same month. But, how does Electronic Arts benefit here?

The game publisher creates content for a wide range of gaming consoles and platforms, reaching end users via physical and online retail channels. Last July, however, management reported that sales from Apple's App Store exceeded those of its other digital retail channels.

So, with its largest digital retail partner gaining ground in China, Electronic Arts stands to benefit as well.

Number crunching
In light of this bullish outlook, however, investors shouldn't get too carried away. 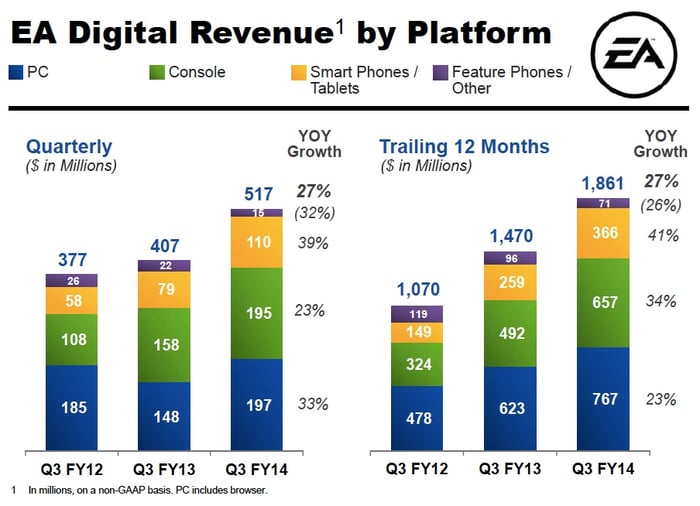 As illustrated in the image above, Electronic Arts' revenue from smartphone and tablets has been growing at a spectacular pace, but therein lies the problem. The company's smartphone and tablet revenue, collectively, accounts for just 21.2% of its overall revenue. This number, in turn, is comprised of software sales on iOS, Android, BlackBerry and Windows Phone platforms.

From the perspective of gains, the annual incremental iPhone sales of 17 million units -- representing about 11% of 2013 iPhone shipments -- may boost Electronic Arts' smartphone and tablet software purchases. But, the fractional revenue contribution of iOS devices may not be enough to significantly boost the game publisher's overall revenue.

Additionally, there are a few concerning factors that limit EA's growth in China.

Foolish final thoughts
Clearly, Electronic Arts doesn't stand to benefit greatly from the Apple-China Mobile deal. So, investors need to set realistic expectations, and invest in the company only after examining its growth prospects in other geographical regions as well.

Piyush Arora has no position in any stocks mentioned. The Motley Fool recommends Apple. The Motley Fool owns shares of Apple and China Mobile. We Fools may not all hold the same opinions, but we all believe that considering a diverse range of insights makes us better investors. The Motley Fool has a disclosure policy.