Please ensure Javascript is enabled for purposes of website accessibility
Log In Help Join The Motley Fool
Free Article Join Over 1 Million Premium Members And Get More In-Depth Stock Guidance and Research
By Ashraf Eassa - Feb 26, 2014 at 11:30AM

With the announcement of its XMM 7260 cellular platform, Intel finally gives Qualcomm some stiff competition.

For years, Qualcomm (QCOM -1.60%) has been, quite frankly, the only choice for high-end LTE modems. Sure, a couple of fairly mediocre solutions have popped up here and there, and sure a number of companies have promised that they had the next Qualcomm-killer coming on the horizon (only to end up horribly delayed/non-existent), but as of Feb. 24, there is finally a credible modem player that's actually winning designs – Intel (INTC -0.03%).

Intel delivers on-target and on-time
Intel has a pretty bad reputation in the ultra-mobile world. While its execution in PCs and servers is typically quite good, the mobile group (both modems and apps processor folks) has been spectacularly bad at actually executing to its plans. Further, in the mobile market, chip companies need to be flexible enough to quickly anticipate the need for a product and deliver it at a rapid clip. This has been a major source of frustration for Intel shareholders.

That said, Intel's modem group – late to the market with its first LTE modem known as XMM 7160 (which was supposed to be an early 2013 launch) – is making up for lost time with its latest-and-greatest XMM 7260, shown here: 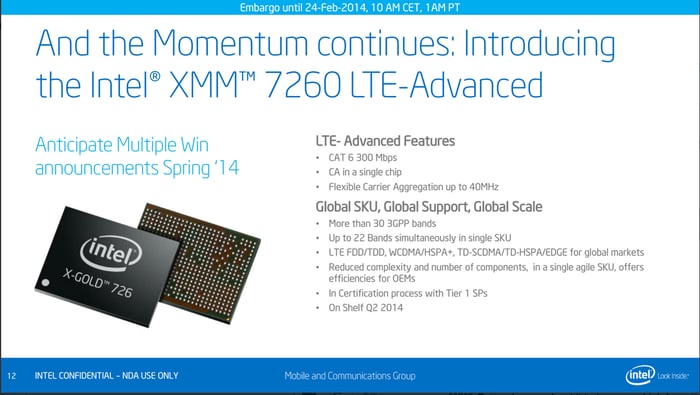 Now, the specifications are rock-solid and it's more than good enough to go into leading-edge top-end smartphones. However, the most important part of this slide is that Intel is making a pretty firm commitment to get devices on shelves by Q2 2014 (which would imply a launch window between April and June). Even more encouraging, Intel pretty explicitly told investors at Mobile World Congress that ASUS, Lenovo, Dell, and Samsung would be using both the XMM 7160 and XMM 7260 LTE modems and that the company is continuing to sign on new customers – win!

Could this give Qualcomm a headache?
With viable competition on the discrete modem side of things, it looks like Qualcomm finally has some competition – which means either market share loss or margin erosion. However, the vast majority of Qualcomm's modems are sold integrated into the same piece of silicon as the apps processor – something that most mainstream phones demand. There are still phones that use discrete apps processor and modem (such as the iPhone), but this market is fairly minimal compared to the overall smartphone market.

That said, if Intel is able to successfully attack a major design like the iPhone as a second-source supplier, then this could actually have a material impact on Qualcomm's results. With that in mind, it is likely that a next generation high-end iPhone will use Qualcomm's latest-and-greatest 20-nanometer baseband while Intel's best shot is in something less glamorous such as non-CDMA SKUs of the iPhone 5c.

However, any progress in winning major discrete baseband customers would likely be viewed positively by the market for Intel and perhaps negatively for Qualcomm. However, Qualcomm's position doesn't really come under fire until Intel can integrate the baseband with the apps processor; at that point, the playing field would be even to compete across a wide variety of designs.

Foolish bottom line
It's good to see that Intel is finally doing something wonderful with its Infineon acquisition and it's even better to see that Intel is actually set to make it to market on-time and on-target with a leadership modem. It will be interesting to see what designs it snatches away from Qualcomm and it'll be even more interesting to see if this helps the sales of the company's apps processor platforms or if customers end up just using it with a competing apps processor.