Please ensure Javascript is enabled for purposes of website accessibility
Log In Help Join The Motley Fool
Free Article Join Over 1 Million Premium Members And Get More In-Depth Stock Guidance and Research
By Michael Hooper - Feb 26, 2014 at 9:31AM

Disgruntled investors have been selling PepsiCo's shares, driving the stock down 4% since the company announced earnings. At what price is this stock a buy?

Shares of PepsiCo (PEP 1.31%) recently fell by 3% after the company reported that it had decided to retain its North American beverage business.

Shareholder activist Nelson Peltz hopes that PepsiCo will spin off its North American beverage business and focus on its more profitable and rapidly growing snack business.

Disgruntled investors have been selling the company's shares, which has driven the price of the stock down 4% since Feb. 13 when the company announced earnings and confirmed that it would not separate its beverage business. Earnings met expectations but investors are troubled by declining beverage volumes. Because PepsiCo is a blue-chip dividend payer with a long history of rewarding shareholders, investors are wise to take a hard look at this company.

What happened?
PepsiCo is a global food and beverage company with several brands that generate more than a billion dollars in revenue apiece. The company sells beverages and food in 200 countries and territories. Due to declining demand for soda, PepsiCo has been struggling to grow volumes in recent years. Meanwhile the snack business, led by Frito-Lay, has actually been growing volumes.

"Decoupling our beverage and snack businesses in North America would significantly reduce our relevance to our customers," Chief Executive Indra Nooyi said.

Upset with her response, Peltz renewed his efforts to split up the company with a 37-page letter to the board of PepsiCo on Feb. 20. Peltz made a pretty compelling case for making the beverage business a stand-alone company, as he said the beverage business could cut costs and focus on growing market share. He said Dr. Pepper Snapple Group (DPS) has shined since it was spun off from Cadbury in 2008.

PepsiCo spun off its restaurant business in 1997 and still maintains a relationship with Yum! Brands by selling its beverages in Yum!'s stores. The spin-off was beneficial to shareholders in both companies.

PepsiCo and Coca-Cola (KO 0.76%) will both try to offset volume declines in sugary soda products with price increases, but a company dependent on price increases alone for growth will eventually hit diminishing returns. 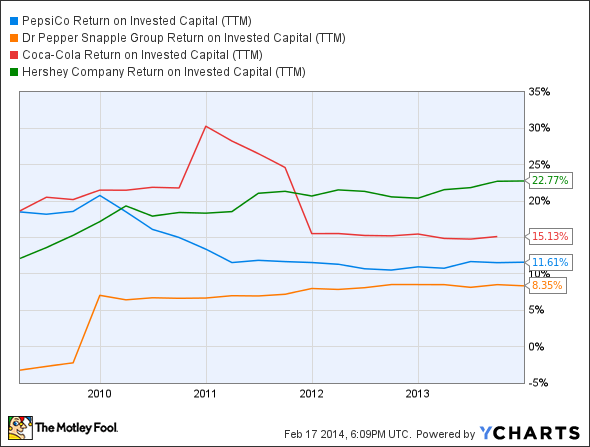 The chart shows us that while returns on invested capital have declined for PepsiCo and Coke, the returns for Dr. Pepper Snapple have improved, but all of these lag the fantastic returns of Hershey.

Over the long term, it's hard for a stock to earn a much better return than the business which underlies it earns. If the business earns 6% on capital over 40 years and you hold it for that 40 years, you're not going to make much different than a 6% return-even if you originally buy it at a huge discount. Conversely, if a business earns 18% on capital over 20 or 30 years, even if you pay an expensive looking price, you'll end up with one hell of a result.

Growing an elephant
PepsiCo and Coca-Cola are old, well-established companies. In other words, these elephants are about as big as they are going to get unless they do something drastic to move the needle. Coca-Cola recently invested in Green Mountain Coffee Roasters to develop at-home soda machines using Green Mountain's existing Keurig technology. Coca-Cola will invest $1.2 billion for a 10% stake in Green Mountain to launch the Keurig Cold beverage platform.

PepsiCo sees opportunities for organic growth, but it would be wise for the company to put something together in the in-home soda space.

PepsiCo has enough money to continue paying its dividend, which currently yields about 3%; its payout ratio is 52%. Here's a look at the rising dividends from PepsiCo and its peers over the past five years: 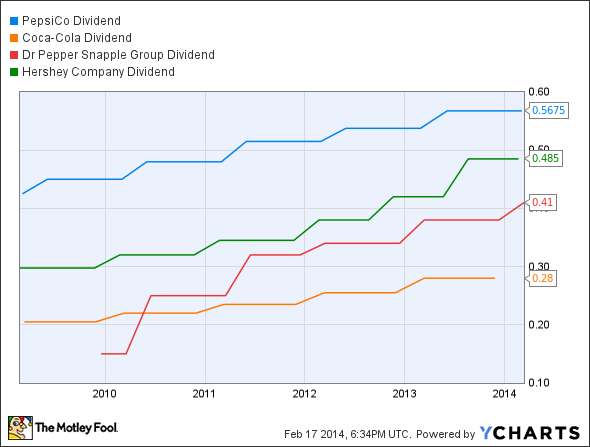 Final thoughts
Income investors may be satisfied in the short term with PepsiCo's dividend, but long-term investors are worried about its declining beverage business and they want to see a real game-changer for the company. Peltz's proposal to spin off the beverage business has merit. If management can't find a different game-changer, I expect the company's shares to lag the general market.