Macy's, Inc. benefited from a lot of unusual items in its recently ended fourth quarter.

On Tuesday, Macy's (M -3.28%) reported fourth-quarter earnings that came in comfortably ahead of the company's guidance. Adjusted EPS of $2.31 also beat the average analyst estimate of $2.17. This made Macy's the first department store to win Wall Street's approval for its Q4 results: Both Nordstrom (JWN -3.86%) and Dillard's (DDS -1.41%) disappointed investors in one way or another.

However, Macy's sales actually fell well short of expectations for Q4. Macy's got a big earnings boost from asset sales during the quarter, which is not exactly a sustainable long-term profit driver. With Macy's shares trading near their all-time high, the risk-reward profile is not very compelling anymore.

Strong earnings, weak sales
Macy's achieved solid earnings growth last quarter in spite of a weak sales performance. In Q4, comparable-store sales increased 1.4%, or 2.3% including sales in "licensed" departments operated by other companies. This was well below the Q3 trend, when comparable-store sales rose 3.5%, or 4.6% including licensed departments.

Fourth-quarter sales fell well short of management's initial expectations due to very poor sales in January. Indeed, in early January, Macy's updated its guidance to reflect 2.3% to 2.5% comparable-store sales growth. Since January is the slowest sales month of the fourth quarter, Macy's must have experienced a severe drop in sales in the last few weeks of the quarter to pull sales a full percentage point below its guidance.

Weather contributed to the softness, but it wasn't the only cause of Macy's weak January results. On the company's conference call, CFO Karen Hoguet acknowledged that sales were also below plan in parts of the country that had fairly normal weather patterns.

This weakness carried into the first two weeks of Q1, although the trend started to improve around Valentine's Day. Weak January sales also caused Macy's to exit Q4 with too much inventory, although it is in a much better position than Dillard's on this front. As Dillard's found out last quarter, too much inventory usually leads to bigger markdowns and lower gross margins.

Altogether, while Macy's maintained its guidance for 2.5% to 3% comparable-store sales growth in 2014, this will require a pickup in sales growth later this year, which may or may not materialize.

The hidden hand of asset sales
With sales growth falling short of expectations, Macy's relied heavily on expense leverage to drive its earnings growth last quarter. Yet while selling, general, and administrative expenses declined from 25.7% of sales to 25% of sales, this wasn't just a result of good expense management.

Instead, Macy's booked $58 million in gains on various asset sales during the quarter, which it accounts for as a credit to its SG&A expenses. Without these asset sale gains, SG&A would have improved very slightly as a percentage of sales, to 25.6%, and EPS would have been about $0.10 lower.

Asset sales are not quite "one-time" in nature, which is why the impact was included in adjusted EPS. On the other hand, asset sale gains are not a sustainable source of income -- opportunities to sell non-core assets profitably don't arise every year. Thus, Macy's earnings results somewhat overstate the true health of its business.

Looking ahead
The real question for Macy's investors is whether the company can put together a better year in 2014. There are some good signs here. While Macy's expects a slight drop in gross margin due to rising shipping expenses, the company recently announced a restructuring plan that will save $100 million in overhead costs. This should result in better underlying profit growth this year.

That said, the excess inventory coming into Q1 is a potential concern. More broadly, after a huge five-year run since the depths of the Great Recession, Macy's stock is no longer especially cheap at more than 12 times expected 2014 earnings. 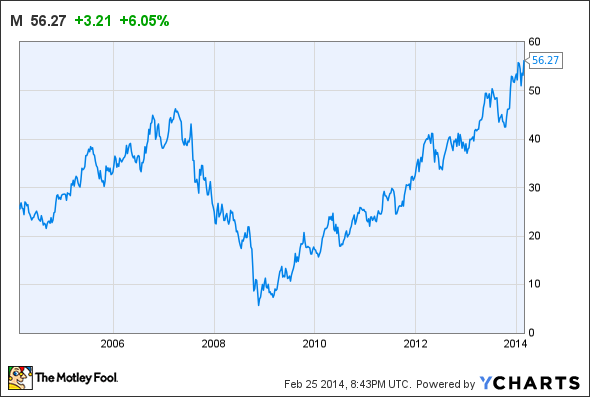 Adam Levine-Weinberg has no position in any stocks mentioned. The Motley Fool owns shares of Dillard's. We Fools may not all hold the same opinions, but we all believe that considering a diverse range of insights makes us better investors. The Motley Fool has a disclosure policy.