Shares of Newfield Exploration (NFX) are soaring today after the company's fourth-quarter results beat expectations. On an adjusted basis the company earned $0.48 per share, while analysts were expecting earnings of $0.45 per share. Overall its quarterly earnings surged 75% over the prior year's fourth-quarter. With that as a backdrop, let's drill down into Newfield Exploration's results.

A closer look at the numbers that matter
There were a lot of moving parts in Newfield Exploration's fourth quarter. The company is in the process of fully exiting its international operations. This included the recently completed sale of the company's assets in Malaysia as well as its planned divestiture of its business in China. Because of that the company's international business is now classified as a discontinued operation.

More energy companies are looking to Oklahoma for production growth these days. Both Eagle Rock Energy Partners (NASDAQ: EROC) and Continental Resources (CLR 0.04%), for example, see the SCOOP play fueling future growth. Continental Resources likes this area so much that it's devoting 25% of its 2014 capital budget to the play. Meanwhile, Eagle Rock Energy Partners sees the compelling well results detailed on the following slide as a reason for it to be optimistic about its investments in the play. 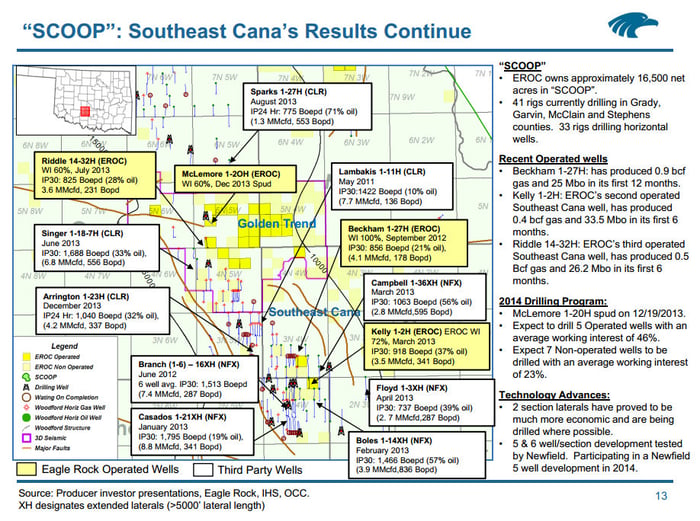 Another area of strength for Newfield Exploration in 2013 was in the Williston Basin of North Dakota. The company enjoyed a 40% jump in its production over 2012. That area, which has fueled the rise of Continental Resources, continues to be a big part of Newfield Exploration's future plans. Finally, the company saw its Eagle Ford Shale production surge 70% year-over-year while its Uinta Basin production remained a solid. This multibasin strategy should continue to deliver strong returns for the company, though its focus going forward will be in Oklahoma.

Investor takeaway
Newfield Exploration had a solid year in 2013 as its production in North America is growing fast. Because of that the company is exiting its international operations so it can put all of its focus on growing production in the America. That will give the company the capital to ensure that its growth trend won't be slowing down anytime soon, In fact, the company expects 28% compound annual production growth through 2016, with the bulk of the future growth coming from Oklahoma.