This RNA therapeutics powerhouse should provide some insightful updates as it enters a critical point in its growth.

It's been a busy month for Isis Pharmaceuticals (IONS -4.03%), which last week reported positive top line results from two studies examining its antisense drug ISIS-SMNRx, sending the stock up more than 15% in a single day. The excitement could continue when Isis reports fourth quarter and 2013 financial results on Friday, February 28. Here are three things to watch when the press release and conference call drop.

1. Cardiovascular competition
Isis' only approved drug, Kynamro, and its most advanced wholly owned drug, ISIS-ApoCIIIRx, are both cardiovascular drugs operating in tightly competitive spaces. In addition to hearing an update on Phase 3 trial design, I'll be interested to hear a discussion of the broader market for cardiovascular drugs and how Isis plans to carve out market share.

Kynamro is approved as a lipid-lowering adjunct therapy in patients with homozygous familial hypercholesterolemia, or HoFH, and is in a Phase 3 trial for the heterozygous form of the disease, HeFH. ISIS-ApoCIIIRx succeeded in a Phase 2 trial for hypertriglyceridemia, and there are plans in the works for Phase 3 trials in both severe hypertriglyceridemia and the rare Familial Chylomicronemia Syndrome, or FCS.

Kynamro's most direct competition is from Aegerion's (NASDAQ: AEGR) Juxtapid, which brought in $16.3 million in the third quarter of 2013. As an oral therapy Juxtapid has a significant dosing advantage over Kynamro's weekly injection, but Isis' marketing partner Sanofi has responded by undercutting the price. But Kynamro and Juxtapid are not alone in the lipidemia landscape, and the PCSK9 inhibitors cruising through clinical trials could disrupt the market for both rare HoHF as well as the more common primary hypercholesterolemia. Amgen's (AMGN -1.56%) evolocumab, for example, is being tested for HoFH, HeFH, and other indications with spectacular results. If evolocumab and Sanofi's alirocumab can continue to excel, then the market for Kynamro could shrink drastically.

A pricing war in HoFH could hurt ISIS-ApoCIIIRx, too, as Juxtapid is also poised to compete in the market for FCS, where the FDA granted it orphan drug designation. ISIS-ApoCIIIRx is well ahead of Juxtapid in development for FCS, but management should start thinking about navigating that competitive landscape as drugs like GlaxoSmithKline's Lovaza also grow into the hyperlipidemia space. The key question to ask in Friday's release is in which market does Isis have the best opportunity: the high margin rare disease market, or the low margin higher volume market for typical hyperlipidemia?

2. Biogen collaboration
Some of the biggest news coming from Isis in 2013 was its expanding partnership with neuropharmacology powerhouse Biogen Idec (BIIB -2.05%). In September the company announced a $100 million deal to collaborate on the development of drugs to treat neurological disorders. That collaboration builds on an existing relationship focused on spinal muscular atrophy drug ISIS-SMNRx.

Last week Isis announced positive top-line results from Phase 2 studies of ISIS-SMNRx in infants and children with the rare neurodegenerative disease. While the trial was small and not placebo-controlled, the dose and time-dependent effects of the drug on muscle function were encouraging. I'll be interested in hearing more about the role Biogen will play in design and execution of a Phase 3 trial, and the implications of these results on Biogen's outstanding option to license the drug.

3. R&D expenses and guidance
I'm a big fan of Isis' business model: partnering with bigger businesses for most development projects, and reserving some of the more promising drug candidates for itself. That's a model being adopted across the industry as big players seek to bolster their pipelines and developmental stage companies hunger for funding. What it means, though, is that Isis' revenue streams are choppy and non-recurring. 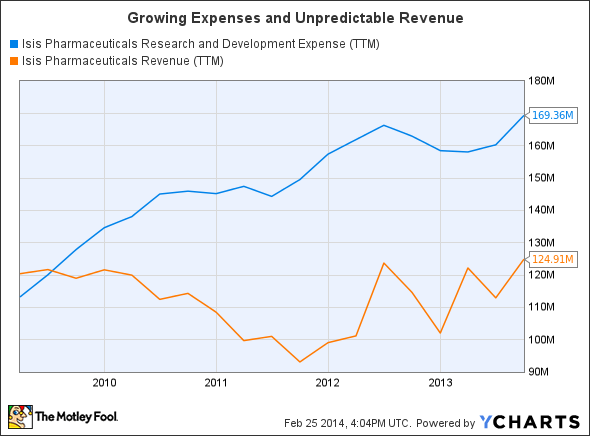 It is therefore imperative that Isis cautiously manage its R&D spending to put its impressive $256 million to good use. That sounds like a lot of cash, but Isis' management has a lot on its plate. R&D expenses grew almost 25% YoY in the third quarter of 2013. I anticipate R&D expenses and 2014 guidance to continue to rise as Isis pushes ISIS-ApoCIIIRx and ISIS-SMNRx into Phase 3 trials.

Foolish bottom line
It's certainly important to keep an eye on Isis' financials, but with several hundred million in cash short term funding shouldn't be an issue. The more pressing issues moving forward will force management to navigate highly competitive markets, and forge strategic partnerships without losing autonomy for its most exciting drug candidates.