Investors are overreacting to earnings that show a still very sick patient.

Management added to the glad tidings, saying its turnaround is almost complete and that it expects the company to be on the straight and narrow path of recovery sometime this year. Management also maintains that it stabilized the business, both financially and operationally, which allowed it to end the year with more than $2 billion in total available liquidity. Furthermore, the path ahead is said to be cleared for growth, as the company anticipates enjoying comps of 3% to 5% in the current quarter. No wonder investors were gleeful.

Well, yeah, it is a wonder. Certainly when compared with the performance at Kohl's, Penney's beat was a welcome relief, indicating that its rival has more soul-searching to do if it wants to avoid Penney's fate of clinging to life. But that doesn't mean the troubled chain's results were as good as they're being made out to be, and as I suggested when Penney put out its preliminary numbers earlier this month, it still has a lot of work to do if it truly wants to survive. As it stands, there's still a lot to worry about here.

First, the fourth quarter is traditionally and historically a retailer's best quarter, and that was no exception for Penney, whose revenues of $3.78 billion were the strongest of the year. Yet they were still 2.6% below last year's results, which until now were among the worst it ever posted. So it managed to record lower sales on barely higher comps, which doesn't seem like much to cheer about. 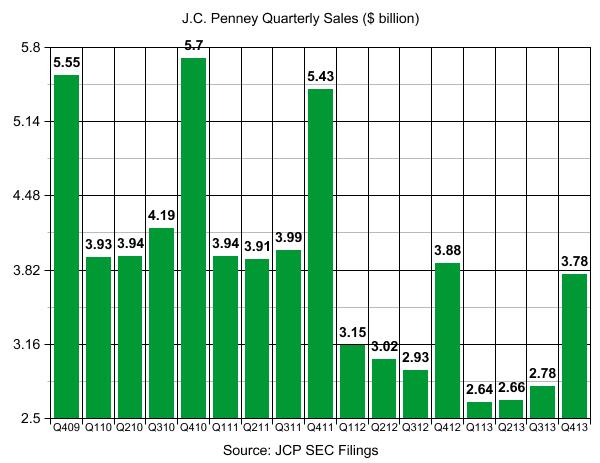 Furthermore, Penney's profit margins continue to erode. I alluded to that likelihood earlier this month, when I said they probably took a drubbing because of all the doorbuster sales the company was offering to draw customers in. Yes, it's what consumers and analysts said was needed to bring the retailer back, and the profit margins were 460 basis points better than a year ago, but how much of a success was it really if sales ultimately still fell, comps were still weak, and traffic was still negative? Did Penney give away the store mainly to tread water? 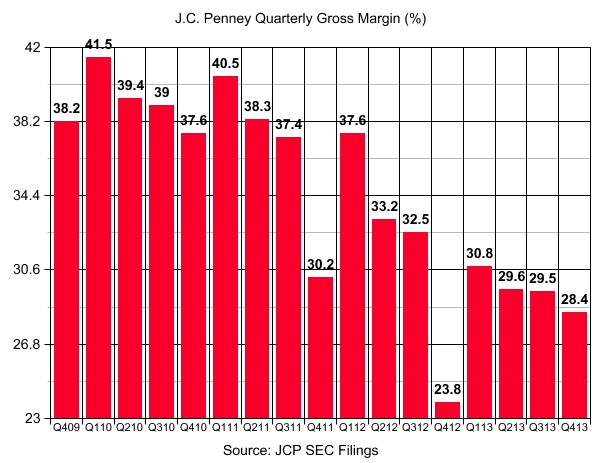 Not completely, as inventory didn't generate as much cash as it typically does, but that suggests the retailer will be offering more doorbuster sales throughout the year to clear out its stockrooms. That could be a problem, because it generated only $246 million in free cash flow, with only $2 billion in liquidity expected for the full year. Since the next three quarters are when the department-store chain burns through much of its cash (last year it set fire to some $3 billion worth in those three quarters), and it expects to end 2014 with the same amount of liquidity it ended 2013 with -- all the while supposedly growing sales -- it suggests that the road to recovery J.C. Penney is touting has more than a few bumps and turns to throw its way yet.

Listen -- considering that the retailer was on the ropes for much of last year and many were expecting bankruptcy, the Hail Mary pass it threw in the fourth quarter -- and caught -- was a phenomenal achievement, but Penney hasn't crossed the goal line yet, and its future remains very much up in the air.

With J.C. Penney having come so close to death, investors can be forgiven for mistaking a heartbeat for brainwaves. I wouldn't pull the plug on the patient yet, but the troubled department store is still on life support, and investors shouldn't further confuse involuntary muscle spasms for a resurrection. I still want the retailer to win, but let's make sure it's conscious first before investing like it's ready to run a marathon.