New orders for durable goods fell 1% to $225 billion for January, according to a Commerce Department report (link opens as PDF) released today. Much of the decline was driven by a 20.2% drop in demand for commercial aircraft, a volatile month-to-month category. Orders for all transportation-related equipment fell 5.6%.

After December's 4.3% dip was revised to -5.3%, January's decrease proved slightly better than expected. Overall, analysts had predicted a 1.6% decline. Durable goods are items meant to last at least three years. 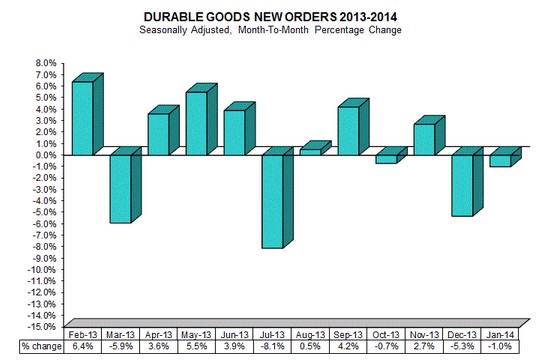 Excluding volatile transportation orders (which include aircraft), January's numbers look even better. Analyst expectations called for a slightly more subdued 0.4% decline, but actual orders saw 1.1% growth, meaning that most of the dip was due to transportation. Specifically, nondefense aircraft orders dropped 20.2% as airlines continue to close up shop on new orders.

As overall new orders declined, so did shipments and nondefense new orders for capital goods. Shipments decreased 0.4% for the second straight month of declines, while capital goods took a 3.9% dip.