J.C. Penney investors may be celebrating too soon. There's a lot of work left to be done to complete the company's turnaround.

Ullman told investors that J.C. Penney has already completed the first two phases of this effort. However, while this might seem to imply that J.C. Penney's turnaround is nearly finished, the company still has a lot of work to do to fully stabilize the business. 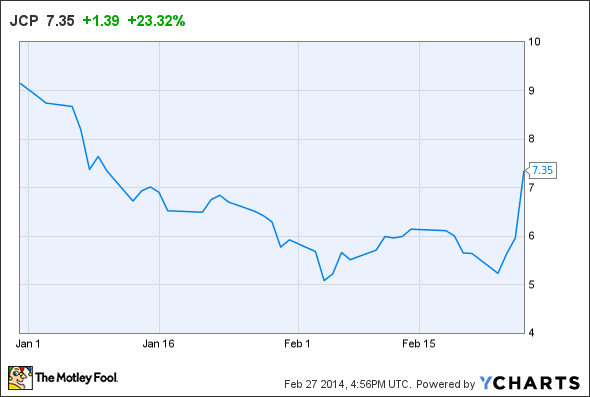 Investors, excited that Penney executives see the light at the end of the tunnel, drove the retailer's stock up as much as 25% on Thursday morning. Nevertheless, J.C. Penney still faces abundant risks, warranting a more cautious view.

First signs of improvement
J.C. Penney did show signs of improvement last quarter, although that was made easier by its disastrous performance in the fourth quarter of 2012, when sales fell more than 30%. Comparable-store sales rose 2% last quarter, and the company recorded an adjusted loss of $206 million ($0.68 per share), which was less than half of its loss in fourth-quarter 2012.

J.C. Penney is also forecasting continuous improvement in 2014. For the first quarter, management expects a 3%-5% increase in comparable-store sales. Gross margin is expected to rise compared to last year's 30.8% level, while selling, general, and administrative expenses should be slightly below last year's first-quarter total of $1.08 billion.

For the full year, J.C. Penney expects a middle single-digit improvement in comparable-store sales, implying a slight improvement in the trend after the first quarter. The company also expects a significant improvement in gross margin. Management hopes that this, along with a big reduction in capital expenditures, will get J.C. Penney back to roughly breakeven on a cash flow basis in 2014.

Turnaround risks remain
If the company can meet all of its 2014 financial goals, it will be well on the road to reaching profitability by 2016 or so. That could drive a strong recovery in J.C. Penney shares.

That said, one of the big reasons why J.C. Penney got into its current mess is that its leaders have repeatedly underestimated the challenges it was facing. While former CEO Ron Johnson was the most out of touch with reality, Ullman has overseen his share of underperformance both prior to leaving the company in 2011 and after returning to the CEO position last year.

For example, on the earnings conference call, Ullman admitted that he and other Penney executives were surprised that the home assortment revealed last summer was a flop with customers. So while the new assortments coming in seem better tailored to core J.C. Penney shoppers, investors should recognize that the 2014 merchandise could also be a disappointment.

Lastly, the retailer's guidance for roughly breakeven cash flow in 2014 seems like a stretch. Last year, J.C. Penney used $1.8 billion of cash in its operations. To cover its 2014 capital expenditures of $250 million and still reach breakeven on a cash flow basis, J.C. Penney would need a $2 billion improvement in operating cash flow this year.

Moderating losses and better working capital management should help J.C. Penney significantly reduce its cash burn. However, getting all the way to positive operating cash flow will require a return to historical gross margin levels by year-end. This is something executives have talked about at great length over the past six months, but the company has not made much progress yet in this respect.

Foolish takeaway
Under Ullman's leadership, Penney's performance finally bottomed out earlier this year. However, the company needs to rapidly improve its cash flow just to remain solvent through the end of 2014.

Plans are in place for J.C. Penney to reach breakeven cash flow in 2014, but shareholders have been burned more than once in recent years as reality fell far short of management's plans. As a result, investors should probably stay on the sidelines until J.C. Penney actually demonstrates meaningful progress in reaching that breakeven goal.