Many investors often associate the health care sector with volatile biotech stocks that can soar or plunge by double digits in a single day. However, investors shouldn't overlook the big names in the pharmaceutical field such as Johnson & Johnson (JNJ -1.50%), Pfizer (PFE -2.01%), and Merck (MRK -0.98%), which offer stable, long-term returns and generous dividends instead of back-breaking roller-coaster thrills.

Let's discuss which of these three big pharma companies offers the best dividend and stability for more passive income investors.

J&J clearly trails Pfizer and Merck in this department. In addition, J&J's stock price has trailed both companies over the past five years: 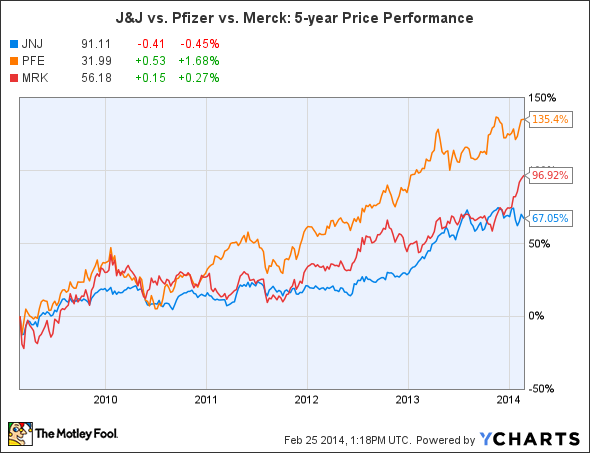 Therefore, in terms of yield and price appreciation, J&J initially looks like a weaker investment than Pfizer and Merck. However, investors should remember that J&J is the largest of these three giants -- with a market cap of $257 billion, compared to Pfizer's $207 billion and Merck's $164 billion -- and, as such, is expected to grow at a slower rate.

Which company is the most generous?
Yet a company's dividend yield is only part of the big picture. The cash payout ratio, or the percentage of a company's free cash flow, or FCF, paid back to the investors, also reveals how generous a company is toward its shareholders. Because FCF data are not yet available for all three companies, I have included information from third quarter 2012 to third quarter 2013. 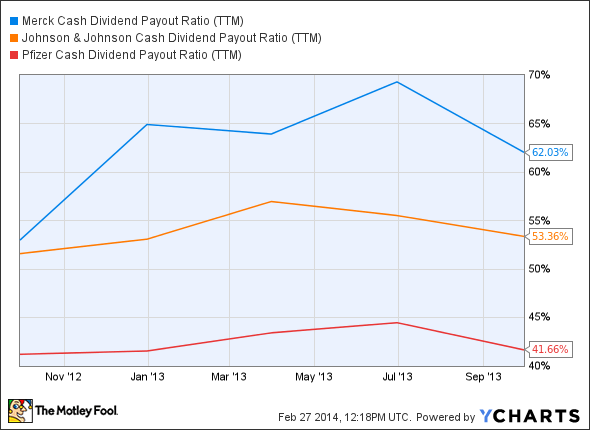 Pfizer's cash dividend payout ratio is the lowest among these three..

J&J has been able to continuously increase its dividend by more than Pfizer and Merck -- mainly due to billion-dollar patent cliffs at the latter two.

By comparison, the only significant patent expiration for J&J in the next five years is Remicade, its best-selling rheumatoid arthritis treatment, which will go off patent in Europe in 2015 and in the U.S. in 2018. However, Remicade isn't Lipitor or Singulair -- the drug only accounts for 9% of J&J's top line. Therefore, J&J is unlikely to stop its tradition of raising its dividend every year.

The Foolish bottom line
With three core businesses -- consumer health care, branded pharmaceuticals, and medical devices -- J&J is the most diversified and well-balanced choice of the three. By comparison, Merck and Pfizer are much more focused on branded pharmaceuticals, which can experience more volatility due to patent expirations and generic competition.

However, both Pfizer and Merck have controlled their bottom lines and dividends with admirable discipline in times of adversity. As a result, their investors have been handsomely rewarded for staying with them for the long term. Therefore, even though J&J is the best "set it and forget it" option for novice investors, Pfizer and Merck are also solid long-term income investments that can stomach a few bumps along the way.

Leo Sun has no position in any stocks mentioned. The Motley Fool recommends and owns shares of Johnson & Johnson. We Fools may not all hold the same opinions, but we all believe that considering a diverse range of insights makes us better investors. The Motley Fool has a disclosure policy.