Bank of America's 2013 annual report is 300 pages. But if you're strapped for time, there's just one number that you should focus on. Especially if you're a fan of dividends.

From terrible to... not
The year 2013 was truly a turnaround one for Bank of America, as its net income applicable to common shareholders stood at $10.1 billion, whereas shareholders saw a loss of $3 billion during the previous four years combined: 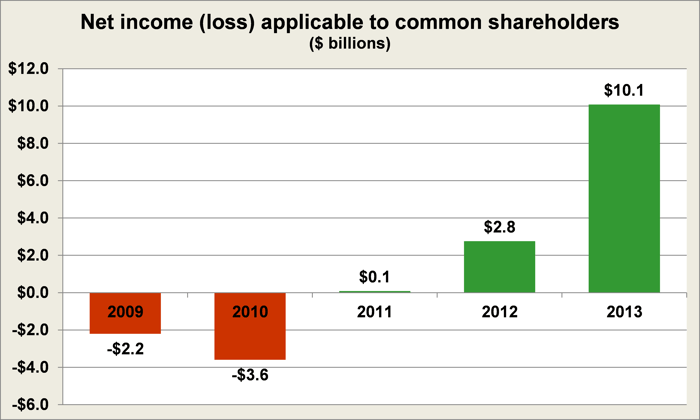 As a result of the sustained improvement and continued turnaround efforts, shareholders have been pleased not only with the rebound in performance, but also the rebound in the stock price, which nearly doubled from the end of 2011 to the end of 2013. Investors who bought shares of Bank of America at the depths of its woes have been rewarded remarkably well when compared to peers Citigroup, JPMorgan Chase, and Wells Fargo: 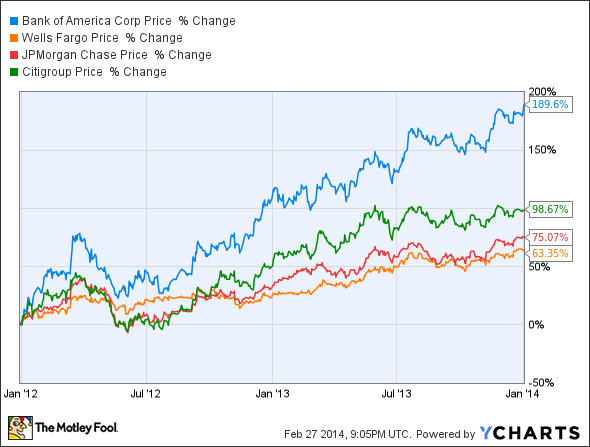 Something still to be desired
Yet, when it comes to dividends, the same can't be said for Bank of America, as it still maintains its paltry $0.01 per quarter dividend. And while Citigroup also pays a minimal dividend, both JPMorgan Chase and Wells Fargo have nearly returned their dividends to pre-crisis levels: 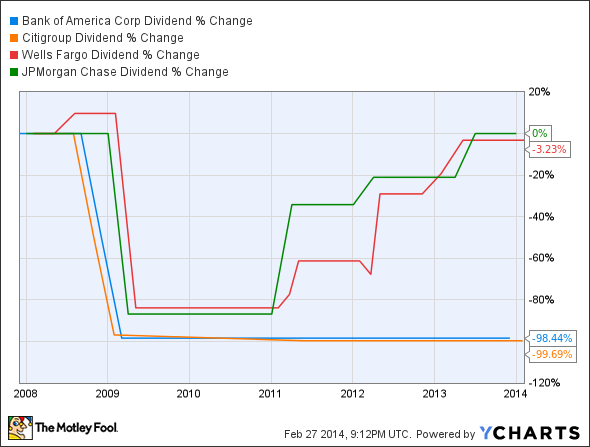 Thankfully, one number in the recently filed 10-K reveals this trend of minimal dividend payments may be changing.

Here's that one number
Remember that number I mentioned at the outset? Here's the big reveal: It's Bank of America's dividend payout ratio -- the dividends paid per share divided by earnings per share.

As a result of the bank's improvement that resulted in a rise in earnings, the dividend payout ratio went from being relatively in line with what JPMorgan Chase and Wells Fargo saw in 2012 to trailing them dramatically now: 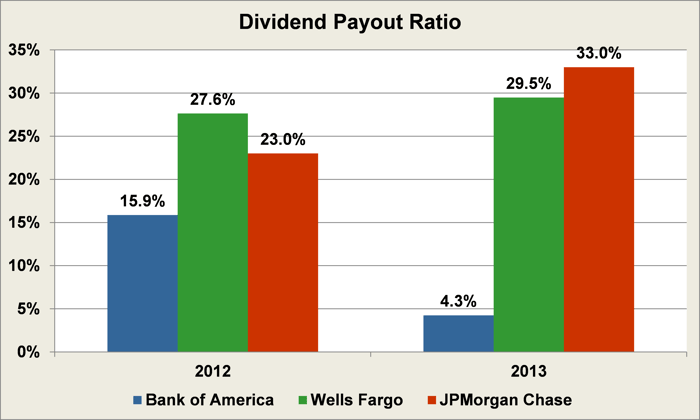 It may be easy to chalk this up as an example of Bank of America being greedy and not sharing the wealth, but it is critical to remember that the newly instituted Comprehensive Capital Analysis and Review (CCAR) has the final say on big-bank dividends. Specifically, before a bank raises its dividend or buys back its stock, it must submit its plan to the regulators to have it approved.

Bank of America's CEO Brian Moynihan has been coy about whether or not the bank would request a dividend increase. On the last earnings call, he said, "We are not going to comment on specific items with respect to the CCAR request." He added, however, that "we feel like we did a good job of preparing ourselves for CCAR this year and we are obviously working hard as we go through the rest of the process between now and mid-March."

Yet, when you consider that Bank of America now has a Tier 1 Capital ratio of 12.4%, which is higher than both Wells Fargo and JPMorgan Chase -- at 12.3% and 11.9%, respectively -- it would seem unlikely that Bank of America would not be approved for a request to raise its dividend. The bank has been working with fervor to turn itself around and truly put its troubled past from the financial crisis behind it; therefore, it seems likely the bank will ultimately seek to raise its dividend and reward its shareholders.

The improvement at Bank of America has been incredibly rewarding to shareholders; but with a dividend raise, 2014 could mark the year where it finally returns to normalcy.