Both United and Humana are leveraging enrollment growth for upside, but Humana may be the better buy.

Looking beyond media sound bites and Washington infighting has rewarded UnitedHealth Group (UNH 0.27%) and Humana (HUM -0.68%)investors. There's no question the two operate in a highly competitive market where margin is thin and regulations are continuously changing. However, launching products like Medicare Advantage that boost membership and drive revenue higher allow the industry to endure -- and even thrive -- amid change.

As a result, shares in both United and Humana have climbed from around $20 in 2009 to $75 and $112, respectively -- making it a good time to consider if one is a better buy than the other. 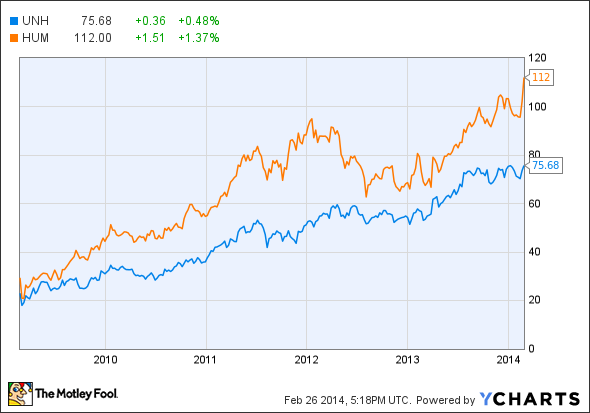 Addressing more needs
Since being reworked in 2003, Medicare Advantage has been a growing source of revenue for both companies. These insurance plans are offered to seniors as a substitute for traditional Medicare. Specifically, Medicare Advantage plans provide more comprehensive Part A and Part B care than traditional Medicare, which means potentially better inpatient and outpatient coverage.

Since claims are processed through the insurer and then reimbursed by Medicare, the companies can boost profit by leveraging existing networks, eliminating wasteful spending, and lowering patient utilization of high cost care.

This focus on containing costs has been keeping operating margin in check at both companies. At United, it has been ranging between seven percent and eight percent, and at Humana operating margin has been between four and six percent over the last five years. 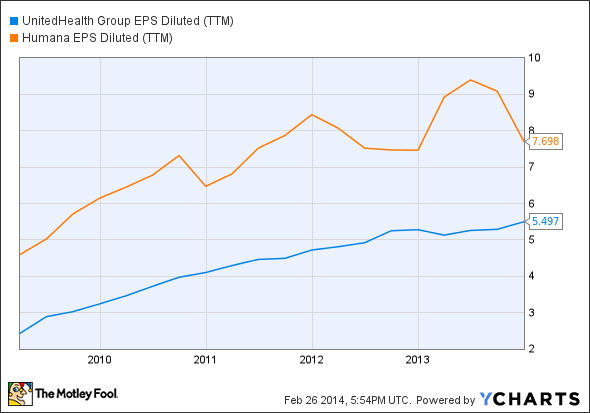 Adjusting to new opportunity
Even though earnings are growing, concerns tied to Obamacare remain. Many of the first to sign up on exchanges may have been previously uninsured due to pre-existing conditions. As those enrollees begin filing claims, insurers may feel the pinch.

Another challenge facing United and Humana is the drop in Medicare Advantage reimbursement rates. Last fall, United warned those headwinds would weigh on profit this year, prompting management to issue earnings guidance of $5.40 to $5.60 per share for 2014 -- roughly in line with results in 2013.

That pessimism has led to analysts lowering their estimates for this year, and for next year too. In the past three months, analysts have cut their 2015 EPS outlook for United from $6.29 to $6.11. Since Medicare products represent an even bigger share of Humana's revenue, the headwinds should create a similar drag on its results. Humana is guiding for earnings of $7.25 to $7.75 in 2014, which suggests that earnings may come in below the $7.73 Humana earned in 2013.

Despite the potential pause in earnings this year, analysts think Humana's bottom line will accelerate in 2015. In contrast to United, estimates for 2015 have climbed from $8.45 to $8.68 over the past 90 days for Humana.

Debating valuation
Investors may argue that United's diversified product line deserves a premium valuation, and current valuation metrics seem to bear that out. Investors are currently paying 12.4 times next year earnings for United's shares, that's above the company's five year average P/E ratio of 10. United also comes with a higher price to book, price to sales, and price to growth ratio than Humana.

That's not to say Humana is cheap. Investors are paying 12.6 times forward earnings for its shares too, and that's also above its average five year level of 9. However, given United's ratios are higher across other valuation metrics, an argument could be made that the benefit of United's diversity is currently reflected in its share price; at least relative to Humana.

If that's the case, United will need to over-deliver on earnings to justify a significantly higher price. If exchange driven private insurance enrollment for less costly, young people ends up being back-end loaded, the economy boosts group enrollment, and Medicare Advantage enrollment accelerates, then United has a good chance of outpacing those lowered expectations.

Humana may prove an even better bargain given its lower valuation metrics, especially since the company is so heavily tilted toward Medicare. Since 10,000 baby boomers are turning 65 every day, there's plenty of opportunity for Medicare Advantage enrollment growth. Importantly, Medicare Advantage cuts for 2015 look to be closer to 4% than the 7% previously feared, suggesting analysts may adjust earnings projections for Humana higher, not lower.

Fool-worthy final thoughts
Both companies have opportunities to move higher if cost containment can outpace the risk of higher utilization and lower reimbursement. But its not just Medicare that offers these two an opportunity for growth. The two also benefit from Medicaid.

United pulled in more than $18 billion last year from Medicaid products, up 11% from 2012. And Humana's Medicaid membership grew 64% last year thanks to new products in Kentucky and Florida. Since Medicaid enrollment is increasing thanks to Obamacare, sales from related products should improve this year too.

Fools should keep a close eye on quarterly enrollment growth and operating margin the next couple quarters to see if these companies are outpacing forecasts. Investors should also pay close attention to April 7th, because that's when Medicare releases its final reimbursement rates for Advantage plans. If final cuts are closer to 7%, Humana will likely suffer more than United; however, if rate cuts are less, Humana may benefit.

Todd Campbell has no position in any stocks mentioned. Todd owns E.B. Capital Markets, LLC. E.B. Capital's clients may or may not have positions in the companies mentioned. Todd owns Gundalow Advisor's, LLC. Gundalow's clients do not have positions in the companies mentioned. The Motley Fool recommends UnitedHealth Group. Try any of our Foolish newsletter services free for 30 days. We Fools may not all hold the same opinions, but we all believe that considering a diverse range of insights makes us better investors. The Motley Fool has a disclosure policy.