Trial results for Intermune's Esbriet launched shares higher this month; however, the opportunity may not justify shares heading much higher from here.

InterMune (ITMN.DL) told investors during its fourth quarter conference call that results from its phase 3 Ascend trial studying Esbriet in idiopathic pulmonary fibrosis, or IPF, would likely be released early in the second quarter.

Investors ended up getting those data sooner than expected, and results were good enough to ostensibly force pessimists to cover some of the seven days worth of shares they held short. As a result, shares surged more than 100% following news Esbriet may slow disease progression and improve patient survival. 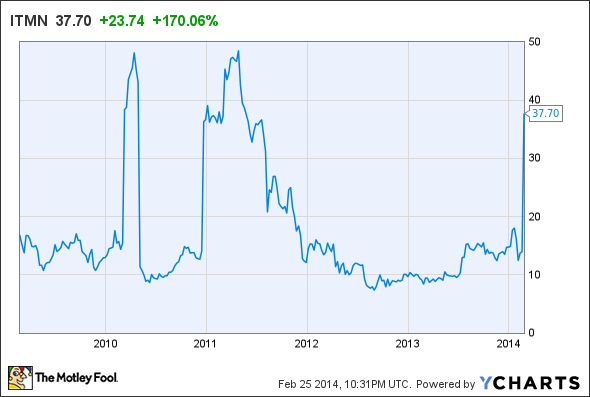 Results bolster the case
That news is important because data submitted with Esbriet's original FDA filing in 2010 were found lacking. Only one of two previous studies -- the Capacity trials -- reduced the drop-off in forced vital capacity, or VFC (a measure of lung strength) from baseline at week 72, versus placebo.

In addition to the additional evidence provided by the Ascend trial, the FDA may also be swayed by Esbriet's ongoing success in Europe, where it won approval in 2011. The drug has since become available in 15 primary markets in the EU and sales continue to grow as doctors warm up to the therapy.

Big drug potential?
Some analysts think adding an approval here in the U.S. could push the market opportunity for Esbriet up toward blockbuster status. However, that assumes the FDA approves it, and the company prices it at a substantial premium to the drug's $30,000 plus cost in Europe.

Currently, there aren't any other approved IPF therapies, so patients are usually treated with prednisone and immunosuppressants, and sadly most patients fail to live beyond five years after their diagnosis. That morbidity and the fact roughly 100,000 patients have the disease in Europe helped Esbriet's sales in region grow from just $26 million in 2012 to a shade over $70 million in 2013. Now that Intermune has rolled out the drug to most of the major European markets, the company is guiding for European and Canadian sales of Esbriet to climb between 60% and 90% to $115 to $135 million in 2014.

Drug developers have struggled to advance new treatments for the disease. Actelion has seen both its Tracleer and Opsumit, approved treatments for the lung condition PAH, fail in trials. And a study of Gilead's (GILD -0.44%) pulmonary drug Letairis for IPF was halted early because the therapy proved too risky for IPF patients.

Those failures are disappointing because those drugs have been widely successful in treating pulmonary arterial hypertension, a market in which those drugs compete against United Therapeutics (UTHR -1.13%).  United also studied its $500 million a year PAH drug Remodulin in IPF, however, that study was terminated in 2009 due to a lack of eligible participants.  Like Actelion and United, Letairis' success in treating pulmonary conditions (sales were up 27% year-over-year to $520 million in 2013) didn't translate into success in IPF.

Given the population of IPF patients in the U.S. is roughly the same as the patient population in Europe, it's probably a safe bet Esbriet will eventually win a similar level of market penetration in the U.S., assuming that FDA green-lights the drug following Intermune's planned resubmission in the back-half of this year. If the company does price the drug at a premium to its overseas price, it may not be much of a stretch to predict peak sales will head nicely higher.

Will that be big enough?
A bigger question for investors may not be whether InterMune can win FDA approval for Esbriet, but whether sales in the U.S. can justify the dramatic jump in the company's share price.

InterMune is guiding analysts to expect it will spend between $110 and $120 million on research and development this year, and the company expects its SG&A costs will be between $210 and $225 million. That means InterMune is going to spend $320 to $345 million on operating costs in 2014 -- up from $260 million in the past 12 months -- when it's projecting sales of just $135 million at the high end. 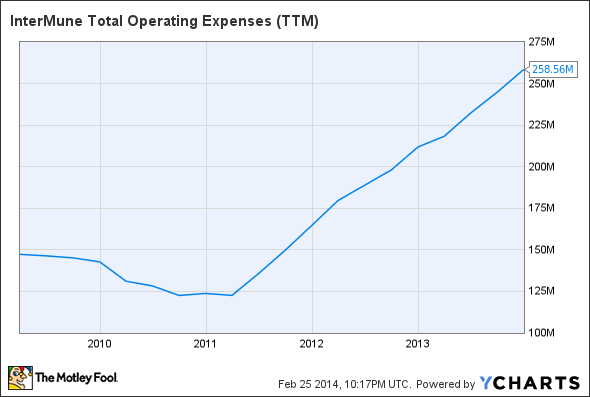 Fortunately, the company does have more than $190 million in cash and equivalents it can lean on, but given free cash flow is running at a negative $200 million over the past year, investors are right to wonder if the U.S. opportunity for Esbriet is worth a $3 billion market cap.

That suggests that if Esbriet gets FDA approval, and if total combined sales can get to $300-$400 million (prior to the release of this data, analysts were projecting for $226 million in Esbriet sales in 2015) , an argument could be made justifying a share price north of $30. However, those are some important "ifs".

While Esbriet's story is intriguing and its potential could be big, investors will likely be served well by watching to see how InterMune's plans to expand beyond Esbriet and IPF progress. InterMune is studying Esbriet as a treatment for systemic sclerosis-related interstitial lung disease, an orphan disease with a similar patient population as IPF, and is working on a longer lasting next generation version of the drug that would improve on its current three times daily dosing. For now, InterMune is an intriguing, yet speculative play.

Todd Campbell has no position in any stocks mentioned. Todd owns E.B. Capital Markets, LLC. E.B. Capital's clients may or may not have positions in the companies mentioned. Todd also owns Gundalow Advisor's, LLC. Gundalow's clients do not have positions in the companies mentioned. The Motley Fool has no position in any of the stocks mentioned. We Fools may not all hold the same opinions, but we all believe that considering a diverse range of insights makes us better investors. The Motley Fool has a disclosure policy.

InterMune Inc. Shareholders Can Now Breathe Easier Thanks to Roche

The 3 Biggest Biotech Wins of the Week

Is InterMune Inc. Your Next Biotech Buyout?