Last week, Microsoft seemed to have lost control of its long-running Ford contract. With the rumor debunked by Ford itself, Microsoft is one of the Dow's strongest stocks today.

Ford is putting Microsoft software in infotainment options when you buy this F-350 truck today. The next generation of Fords may still come with Microsoft inside.

A week ago, rumor had it that Ford (F 1.09%) isn't just looking for a new infotainment systems provider, but that it had already decided to boot out incumbent SYNC system builder Microsoft (MSFT 6.16%) in favor of a QNX-based alternative from BlackBerry (BB 0.62%).

The rumor had some credence because Ford owners have not been happy with their Microsoft-powered SYNC systems for some time, and QNX already comes factory-installed in high-quality vehicles from BMW and Audi, among others.

Microsoft investors took the potential bad news to heart, and the stock underperformed the rest of the Dow Jones Industrial Average (^DJI 2.18%) as the rumor made the rounds. 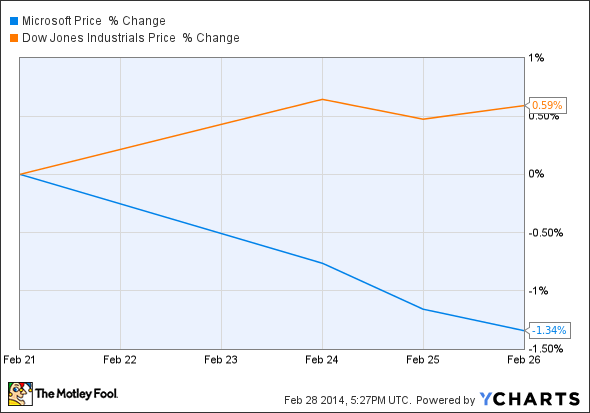 But yesterday, CNET scribes snuck up to Ford representatives attending the Mobile World Congress in Barcelona, and asked them point-blank about the future of SYNC infotainment systems.

"SYNC 1 and 2 was done with Microsoft but we are not married with them. For us, it's a supplier, so every time we keep evaluating is it the right partner," said Pim van der Jagt, managing director at the Ford Research Center in Aachen, Germany.

But Microsoft is not out of the running for Generation 3 yet, and BlackBerry is most certainly not the anointed replacement -- yet, anyway. "We are spec'ing out our requirements for the next generation: what we want to do, what features we want to add, what functionality. Then you go through a normal supply selection process. Those requirements for the next generation get sent out to everybody ... and they come back with offers," van der Jagt clarified.

So BlackBerry is just one of several names under consideration for the next SYNC design, and Microsoft is actively bidding on the contract.

The market reaction to this bit of investigative reporting was swift and strong. Both stocks decoupled from a moderately positive day on the Dow and other major market trackers: Microsoft is skyrocketing and BlackBerry investors are dumping shares (albeit on low volume). 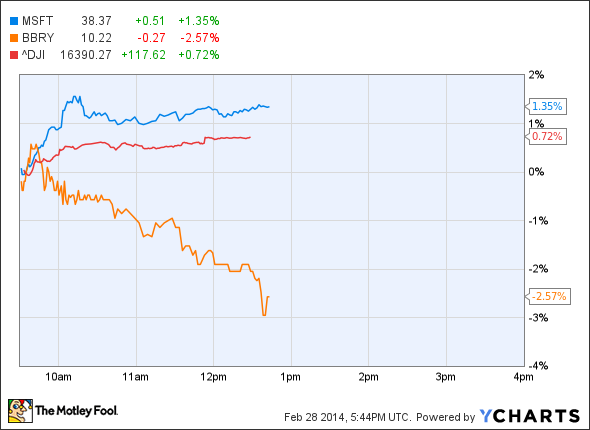 Like Microsoft, BlackBerry is still in the running. But the Ford contract isn't the slam-dunk win that speculators saw in last weekend's Ford rumors. That's yet another reminder that rumor-mongering isn't a great basis for investment strategies.