Philip Morris' falling sales within the Philippines have been dragging on its results for some time now; here's why.

Philip Morris International (PM 1.80%) has a 16% share of the global tobacco market and the company's Marlboro brand is one of the most famous brands in the world. However, Philip Morris has a problem in the Philippines and this has been an issue for several quarters now. Indeed thanks to its problems in the Philippines, Philip Morris has been falling behind in comparison with international peer British American Tobacco (BTI 0.98%) and domestic US peer Altria (MO 1.32%).

What's the problem
So what's going on? Well, excise tax reform is mostly to blame. You see, up to 2013 the Philippines government placed an excise tax on cigarettes based on the net retail price per pack. Anything under 11.50 Philippine pesos, PHP for short, was taxed at 2.72 PHP per pack and any packet of cigarettes with a retail price above 11.50 was taxed at 12 PHP per pack, an unfair method of taxation.

Now, this method of taxation is being reformed. The Phillipines government began to revamp its tax rates in 2013 and this will continue until 2017, and the tax changes include an increase in the rate of tax on all cigarettes to a standard 30 PHP per pack. As a result, over the long-term Philip Morris' management believes that the company will actually benefit, even though its sales are taking a hit in the short term.

How will the company benefit?
To understand why Philip Morris will benefit, we have to take a look at the Philippines tobacco market. in particular, Philip Morris' main competitor in the market, Mighty Corporation. According to Philip Morris, going by official tax statistics and Nielsen baseline data, Mighty Corp. declared to the Bureau of Internal Revenue less than half the volume of cigarettes that it sold in 2013. This gave Mighty the ability to maintain artificially low prices for its brands, which kept the rate of tax applied down. By establishing a set rate of taxation across all cigarette types the ruling should remove Mighty's ability to maintain artificially low prices and the price gap should close, which will put Philip Morris back in the game.

To highlight the scale of Mighty's tax avoidance check out this slide from Philip Morris' presentation at the 2014 Consumer Analyst Group of New York Conference: 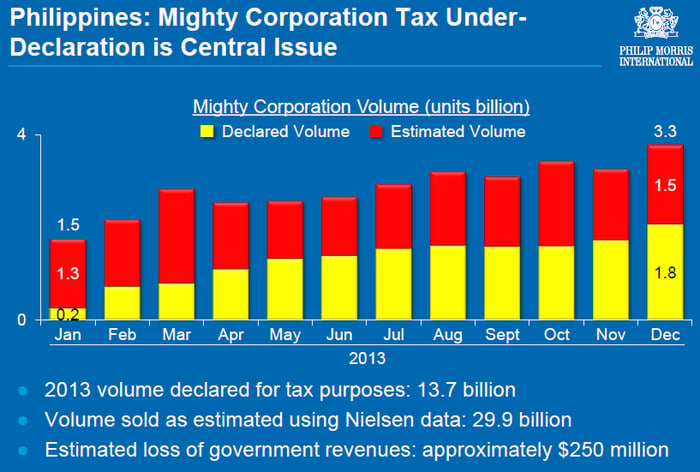 As we can see, by under-declaring the volume of tobacco sold by around 50%, Mighty has an unfair advantage over Philip Morris. With taxation rules changing, this under-declaration should soon be brought under wraps and Philip Morris should benefit with its national distribution network, internationally recognized Marlboro brand, premium pricing, and corporate accountability.

Back in the US, according to data supplied by Gurufocus.com, Altria's operating margin has nearly doubled from just under 24% back in 2004 to approximately 46% for 2013. Actually, if we take a look at Altria's full-year 2013 earnings press release, we can see that Altria's operating income from smokeable products jumped 13%, with the operating margin rising from 21% to slightly over 30%. For tobacco investors this is a great result as it means that they do not have to worry about declining sales as the volume of cigarettes sold continues to decline -- profits are still going up.

Foolish summary
So overall, rising excise taxes have hurt Philip Morris' cigarette sales in the Philippines for the last year or so but over the long-term, these taxes should bring equilibrium to the market. Still, taxes are going to continue to rise for some time, until 2017, so it is likely that Philip Morris will continue to suffer until then although by the end of the decade the company should be getting back on track.

Why Etsy Stock Was Climbing Higher This Week
376%