Barnes & Noble plans to release a new tablet into a battle long lost to Amazon. Why can't the bookstore chain leave its Nook behind?

Barnes & Noble (BKS) reported third quarter earnings for fiscal 2014 on Wednesday and the big story came not from the 10% year-over-ear revenue decrease, but from the planned launch of a new Nook color tablet in early fiscal 2015. The Nook has fallen far behind Amazon's (AMZN -3.03%) line of Kindle products, even as Microsoft (MSFT -2.03%) stepped in to back the Nook. Will a new color product help the Nook gain more market share or further stoke the Fire?

The Nook segment only accounted for about 8% of total revenues in the third quarter.  Barnes & Noble wouldn't fold if the Nook went extinct -- and at some points, the company's seemed willing to let that happen. But here comes another Nook device to inspire tepid sales and more questions about why so many companies wont' admit this project isn't working.

Nook's steady fall
Nook segment sales for the third quarter were $157 million -- over a 50% year-over-year drop. Barnes & Noble attributed part of the fall to the fact that no new devices launched during the holiday season. But the company launched a device in October: The Nook GlowLight, a Johnny-come-lately answer to Amazon's lit e-ink Paperwhite reader. It's true this wasn't a new tablet-style Nook, but the last releases in that category -- the Nook HD and HD+-- began shipping in Oct. 2012 and didn't exactly set the sales charts ablaze. Note that the HD devices release coincided with the third quarter of fiscal 2013. 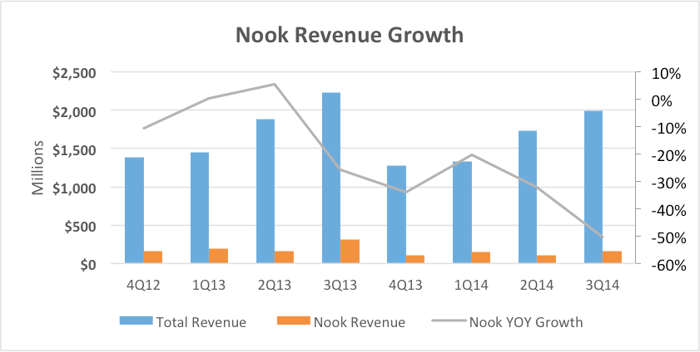 The HD devices inspired a brief positive sales growth before the bottom fell out again. Competitor Amazon doesn't disclose its Kindle unit sales. But it's a fairly safe bet that the growth and revenue charts would look better than what's pictured above.

The Nook segment losses did narrow in the third quarter-down from an over 60% drop in the second -- only because Barnes & Noble slashed prices for the devices to move unsold inventory. And the promotional tactics and price cuts still didn't pay off.

But the situation has grown even more dire than the segment plummet suggests. Amazon sells Kindle devices at a loss to encourage the purchase of its e-books and other media products playable through the tablet versions. Barnes & Noble was forced to keep Nook prices in the ballpark of the Kindles -- without the backup of media sales. In the third quarter, digital content sales were a paltry $57 million, down nearly 27% from the prior year's quarter.

So the Nook costs the company money at every turn. But could Barnes & Noble have a Nook savior in Microsoft?

Does Microsoft want Nook?
Barnes & Noble and Microsoft completed a strategic partnership in Oct. 2012 with the tech giant paying $300 million in a spun-off division called Nook Media. Rumors have periodically popped up that Microsoft plans to further its Nook investment or outright purchase the segment.

But Microsoft has enough of its own problems right now with the unpopular Windows 8 operating system and the company's failure to gain significant tablet market share away from Apple and Google. And the corporate restructuring under new CEO Satya Nadella would look misguided pursuing a stronger union with Barnes & Noble and the Nook.

Foolish final thoughts
Barnes & Noble's clinging to the Nook as it sinks into the murky depths for no clear reason. The battle was long lost to Amazon and the segment doesn't account for a sizable percentage of overall revenue. Even at their strongest, Nook device sales have done little to boost sales of the company's e-books. Sometimes it's best to admit defeat and walk away rather than launch another tablet that won't sell.

Brandy Betz has no position in any stocks mentioned. The Motley Fool recommends Amazon.com. The Motley Fool owns shares of Amazon.com, Barnes & Noble, and Microsoft. We Fools may not all hold the same opinions, but we all believe that considering a diverse range of insights makes us better investors. The Motley Fool has a disclosure policy.

This Just In: Amazon, Inc.'s Brick-and-Mortar Ambitions Go Beyond Bookstores