3D Systems stock got a boost on Friday as investors brace for more growth ahead. Here's what you need to know

Shares of 3D Systems (DDD -5.13%) surged 6.8% today, carrying the stock to a daily high of $79.77 after opening at $75.96 a share. The move came after 3D Systems reported fourth-quarter earnings results before the bell that were in line with analyst expectations. 3D Systems posted record quarterly revenue of $154.8 million, a 52% increase from the same period a year ago. Wall Street was looking for fourth-quarter revenue of $154.9 million. The company generated a profit of $0.19 per share in the quarter, which was on par with estimates.

Nevertheless, it's important to keep in mind that analysts had lowered their fourth-quarter estimates by as much as a third ahead of 3D Systems announcement today. 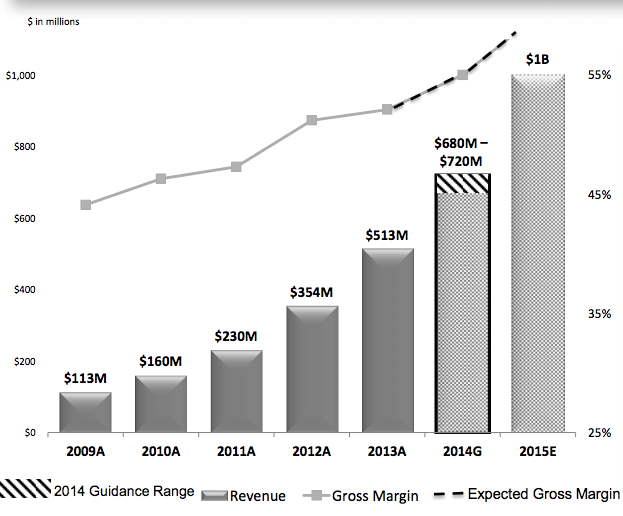 While 3D Systems' quarterly and full-year results were certainly encouraging, a bigger reason for the stock's jump today was the company's projected growth through 2015. As you can see from the chart above, 3D Systems expects revenue to double in the next two years. Moreover, the company is confident it can achieve $1 billion in sales by 2015, up from the $513 million it earned in 2013. This is a much stronger growth trajectory than many on Wall Street had anticipated.

For 2014, 3D Systems said it should pull in revenue of $680 million to $720 million. Much of this growth will come from increasing manufacturing capacity, as well as future acquisitions, according to CFO Damon Gregoire.

Investing in a printable future
No matter how you look at it, there's huge potential for 3D Systems and other players in the fast-growing additive manufacturing space. Research and development will be important for 3D Systems going forward. Up to now, the company has captured much of its growth by acquiring smaller competitors. However, this seemed to shift in the latest quarter. In fact, 3D Systems more than doubled research and development spending from $7.8 million in the fourth quarter of 2012 to $16.6 million in the most recent quarter. As the company continues to invest more in R&D, investors should see more organic growth. 3D Systems now hopes to reach a 30% organic growth rate in fiscal 2014.

Nevertheless, investors took back some of the stock's gains today, as shares settled around their opening price in late afternoon trading. Shares of 3D Systems were trading around $76.03 as of 4 p.m.