A look at The Fresh Market

Promotions become commonplace in a competitive landscape, and The Fresh Market continued its promotional cadence in the third quarter of fiscal 2013 to drive more traffic to its stores. In addition, it also opened a record number of new stores with 10 openings during the quarter. As a result of these initiatives, comps grew by 3.1% and traffic increased by 2.8% year-over-year . This represented the third consecutive quarter of higher traffic for The Fresh Market, even in a challenging economic environment. As a result of positive comps and new store openings, consolidated sales jumped 13.1% year-over-year.

The strategically designed promotions resonated well with target customers, which thus fueled growth in customer transactions and led to a gross margin expansion of 40 basis points. On the back of revenue growth and gross margin expansion, earnings per share came in at $0.23. However, despite all this, The Fresh Market failed to meet analyst expectations and the stock took a beating on the Street. In the last year, the stock has tanked by almost 35%. Both pure-play organic- and natural-food retailers have underperformed the market, as shown by the chart below. 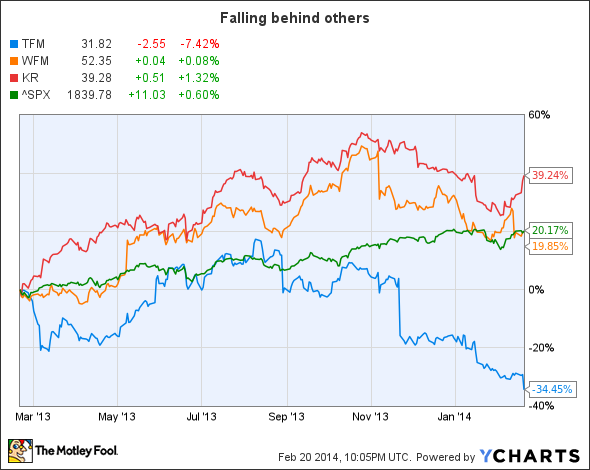 During October, The Fresh Market witnessed a deceleration in consumer activity, and this is expected to continue in the fourth quarter as well. Hence, the financial outlook for the year was revised downward. Fresh Market expects comps growth in the range of 3%-3.5% and full-year earnings are expected to be in the range of $1.42-$1.47 per diluted share. Moreover, severe winter weather across much of the U.S. was a further dampener for shopping behavior. Hence, it would not be surprising if the fourth-quarter results come in at the lower end of guidance.

Whole Foods is also feeling the pressure
Severe winter across much of the U.S. affected Whole Foods as well, as the company saw customers making fewer trips and buying more items with each trip. In addition, as the organic food landscape becomes more competitive as more players join the game, pricing pressure will take its toll on pricing power. This is reflected in the moderation of 106 basis points in average price per item.

Comps were comparatively stronger at 5.4% year -over-year, but this was not enough to help earnings match up to what analysts had expected, and as a result Whole Foods' shares tanked. However, despite a poor quarterly performance, the company is on course to open between 33-38 stores in 2014 and 38-45 stores in fiscal 2015.

Kroger is investing in digital growth plans and it recently acquired the assets of leading digital coupons and promotions company YOU Technology Brand Services . This will help Kroger broaden its digital reach, and the company will also be in position to challenge stiff competition from brick-and-mortar mass retailers like Wal-Mart.

Bottom line
Both Whole Foods and The Fresh Market struggled in the previous quarter due to severe weather conditions. However, both companies are on track with their expansion plans and they could profit from growth in the organic food market in the future. Analysts are also supportive of this possibility as The Fresh Market's earnings are projected to grow at a compound annual growth rate of 20% in the next five years and Whole Foods is close behind at 17%. As a result, investors can count on these two companies for the future and use their recent weakness to buy shares.