The concert promoter, venue owner, and artist manager is seeing more ticket sales than ever and a growing roster of top-tier artists to tap into. Is this a no-brainer stock?

Of any public company directly involved in the still-ailing music industry, LiveNation ( LYV -5.06% ) is one of the best positioned to benefit tremendously amid the disruption. As is widely known by now, touring is the greatest source of income during an era in which record sales (even digital ones) are not enough to sustain the business. In its recent earnings, LiveNation proved this trend yet again as the concert promoter, venue owner, and artist manager reported a near-20% gain in concert attendance throughout 2013. Though it remains unprofitable and thus richly valued, LiveNation offers investors the most viable version of the music industry.

A look at the headline numbers might not be too energizing, as LiveNation continues to lurk in the red with a net loss of $0.42 per share in the fourth quarter. The number is, however, half the loss that the company posted one year ago as ticket sales continue to grow at appetizing rates. 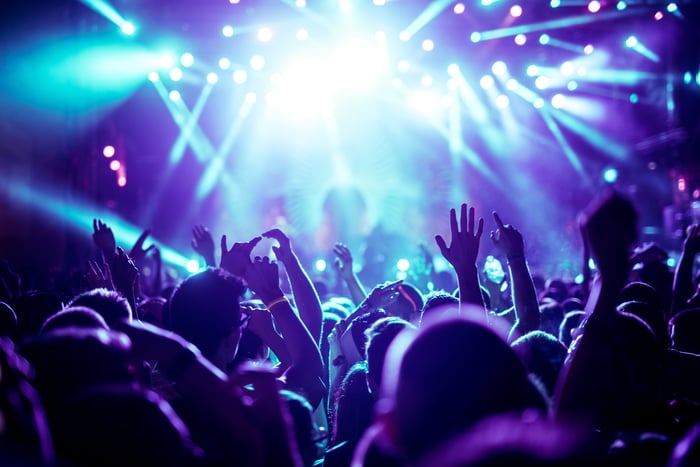 On an operating income level, the company was actually profitable for the full year, with $140 million. On an adjusted basis, the bottom line loss of $7 million was the nearest it has been to breakeven in some time. All in all, 2013 was a record year for the promoter behemoth.

But does that justify LiveNation's richly valued stock price?

Bang for your buck
LiveNation was the lead promoter for 21 of the top 25 grossing concerts last year. To say the company (which owns Ticketmaster) has a hold on the industry is an understatement. Advertising was up 26% while sponsorship revenue rose 11%. With top-tier artists operating under its managing subsidiaries, LiveNation increased the number of shows it delivered by 50%.

In short, the scale of this business demands respect.

To give a clearer picture of valuation, LiveNation's 2013 free cash flow was $300 million, which gives the company a P/FCF (trailing) of about 15.3 times. Value-seeking investors aren't going to swarm the stock anytime soon, but growth-hungry stock pickers can surely find richer valuations than those in the technology world.

Through the middle of February, LiveNation's ticket sales continued their climb -- up 8% year over year. Keep in mind that this is during a time in which consumers are so price-conscious that they won't visit Olive Garden.

Consumers interested in attending major shows or sporting events basically don't have a choice but to interact with LiveNation. While those pesky fees can be frustrating for shoppers, the extreme competitive moat sparkles in the eyes of investors. LiveNation and its properties should see tremendous growth in 2014. If growth is your game, consider investing in one of the few businesses that is loving the direction of today's music industry.

Where Will Live Nation Entertainment Be in 3 Years?