"Shale gas has provided the United States the opportunity to have 100 years of supply that is domestically produced."
-- Former Secretary of the Interior Ken Salazar

In 2003 Time Magazine ran an article titled "Why U.S. Is Running Out of Gas" that detailed our national plight at the time, which foresaw our country running out of natural gas. Because we thought we were running low many companies started to build liquefied natural gas import terminals. As natural gas prices started skyrocketing it made it difficult for people to heat their homes in the winter. It was a worrisome time for a country that was trying to figure out how to power its massive, energy-intensive economy.

The following diagram shows the many different geologic formations that are known to hold natural gas. 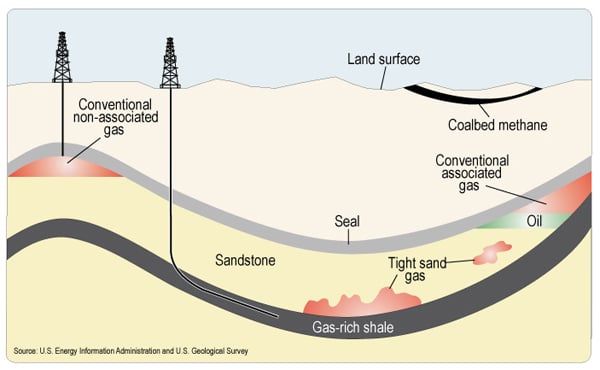 Instead of drilling down and hitting a pocket of conventional natural gas, drillers like Chesapeake Energy Corporation (OTC:CHKA.Q) needed to go horizontally in order to tap the thin layers of shale holding the gas. Then drillers needed to hydraulically fracture or break up the rock and prop up those cracks so that the gas can pass through the rock and out the well bore. Once the formula was perfected it could then be used on nearly all of America's shale gas basins.

Where is all our shale gas?
As the following map shows, there are several current and prospective shale plays throughout the U.S. 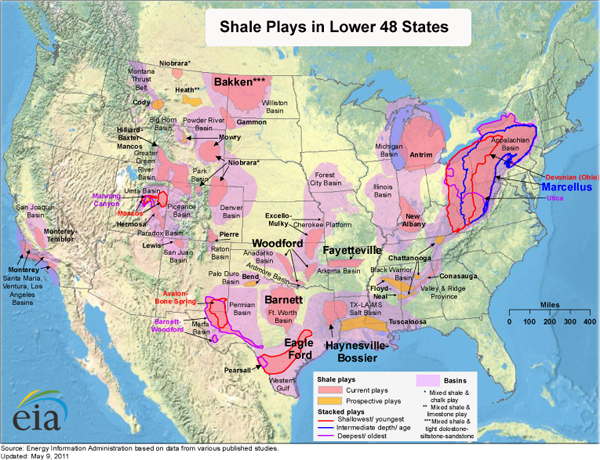 The major sources of shale gas include the Marcellus Shale in the Northeast, the Fayetteville Shale in Arkansas, the Haynesville-Bossier Shale in Louisiana and Texas, and the Barnett Shale, also in Texas.

Shale gas production is growing fastest in the Marcellus as that shale is rich in natural gas and it can be extracted at a low cost. According to Pennsylvania state regulators, production topped 3 trillion cubic feet last year. That's more than double what the state produced the previous year. Because of that the Department of Energy estimates that the Marcellus Shale now provides 18% of our nation's natural gas production.

Companies like Range Resources Corp. (NYSE:RRC) and Cabot Oil & Gas Corporation (NYSE:COG) are thriving by drilling for shale gas in the Marcellus Shale. Range Resources, for example, grew its production per share by 23% last year. It sees 2014 production growth of 20%-25%, which is a range that investors can expect to see for many years to come.

Finally, of course there is Chesapeake Energy, which many consider the king of shale gas. The company used shale gas to fuel its way to becoming the nation's No. 2 natural gas producer. (ExxonMobil is No. 1, but shale gas isn't such a big part of that big company's future.) While much of Chesapeake's growth these days is focused on the more oil-rich Eagle Ford Shale, the company is also developing the Haynesville Shale and the Marcellus Shale so it still produces a lot of shale gas.

Wrapping it all up
America is sitting on an impressive amount of shale gas. So much in fact that President Obama is calling it our "bridge fuel" to cleaner energy. The amazing growth potential of shale gas can not only fuel our economy for decades to come, but it has the power to fuel wealth creation for investors who are positioned to profit from the energy boom.

How to invest in America's energy boom