Privatization of water supplies will be an important issue as shortages become more widespread.

The droughts currently ravaging California, which will likely send food prices soaring down the road, have highlighted the importance of available freshwater supplies. As 17 communities in California are within 60 days of running out of drinking water, the ability of companies like Coca-Cola ( KO 0.53% ) and Nestle ( NSRGY 0.11% ) to effectively privatize water supplies feels awfully disconcerting. While the rains that just began to fall out west may bring some measure of relief, the fact remains that the world is coming up hard against a water crisis.

In thirsty regions of the world, Coca-Cola and Nestle have repeatedly clashed with communities over the perception that the companies were commandeering scarce water supplies at the expense of small farmers and poor villages. While both companies have deployed aggressive water conservation campaigns, with an understanding that water is an essential input to their businesses, Nestle and Coca-Cola have long faced accusations that they suck vulnerable communities dry in pursuit of their profit motives.

Nestle's chairman, Peter Brabeck-Letmathe, believes that water privatization is the key to solving water scarcity issues. Activists see water as a fundamental human right. What should we believe? More importantly, which approach actually improves access to water for the thirstiest among us?

Most people view water as an infinite, inexhaustible resource, much like air. After all, it's part of a whole natural cycle, right? For most practical purposes, though, water -- especially clean, safe drinking water -- is resolutely finite and exhaustible. It's getting worse as the global population hurtles toward the 9-billion mark, as agricultural and fuel extraction guzzle more and more water, and as climate change adds growing stress to existing supplies.

Water: human right or commodity?
Because the stakes are so high -- water is perhaps the single most critical factor to sustaining human life, and no part of our economy can function without it -- the discourse around this issue has reached a fever pitch. Many people view the whole matter in moral terms: water is an essential human right, and so any attempt to commoditize it is fundamentally wrong.

Certainly, water privatization has a checkered history. There are plenty of cases where it has been done poorly, leading to rate hikes, diminished water quality, corruption, and the marginalization of the poorest and thirstiest members of communities. Activists were horrified, then, when Nestle's chairman dismissed the right to water in a 2005 documentary as an "absurd notion."

To be fair, that was one unfortunate comment -- on which Brabeck-Letmathe has since backtracked -- in the context of a much broader, more nuanced discussion that has some merit. The point Brabeck-Letmathe and others make is that right now, the cost of vital drinking water for the poorest of the poor is the same as the cost of massive, wasteful withdrawals for non-essential purposes by wealthy interests: namely, almost free. This imbalance encourages inefficient use of our water resources, and there is no incentive for that to change.

"Americans are spoiled. We turn on the tap and out comes a limitless amount of high-quality water for less money than we pay for cell-phone service or cable television," explains Robert Glennon, author of Unquenchable: America's Water Crisis and What We Can Do About It. "Because water is so cheap, people don't value it."

Public, private, or something in between
The proposal from Glennon's ideological quarter is that while we first have an obligation to assure that people's most essential water needs are met, we need to introduce an appropriate price for water beyond that basic threshold. Price signals and market forces can lead to more efficient water allocation. Brabeck-Letmathe's argument largely tracks along the same lines.

Human beings need five liters a day for hydration and 25 liters a day for minimum hygiene. That accounts for a whopping 1.5% of freshwater extraction for human purposes. Unconventional fuel-source extraction and ever-thirstier agriculture account for a wildly disproportionate share of the rest. The thinking goes that if there were a value placed on that remaining 98.5% of the water we use, we might use it in a more appropriate manner.

There is evidence from privatization schemes around the world that there can be benefits. Many water systems in poor countries would not exist at all if it had not been for private funding. Water infrastructure across multiple countries is in need of massive investment, whether because no system yet exists or because the system has aged well beyond its functional life. Evidence also shows that consumers of all stripes tend to conserve water when it has a price.

So, then, Nestle and Coke for president?
Does that mean that Nestle and Coca-Cola are our water saviors? Well, no, not really. While Brabeck-Letmathe's assertions have real merit that warrant serious consideration, Nestle itself remains a big part of the problem, as does Coca-Cola. 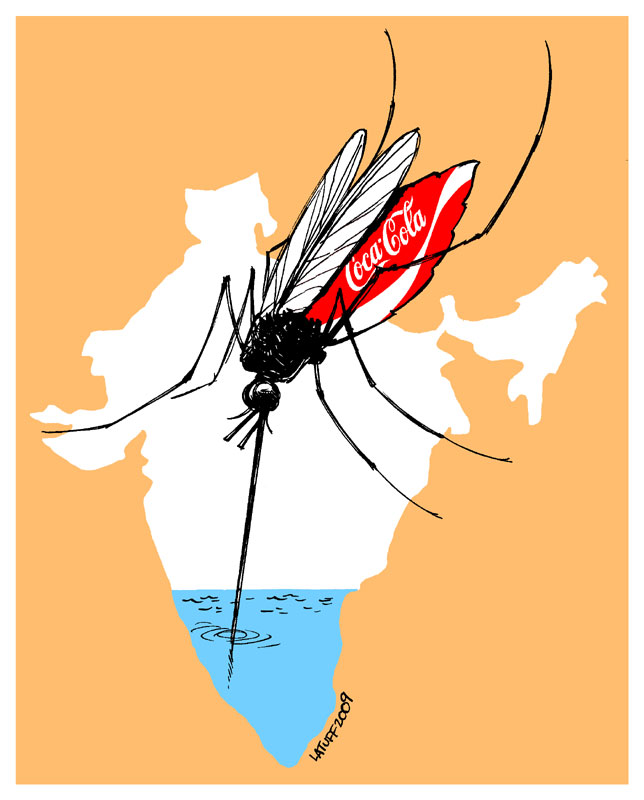 The companies' conflicts with communities in Latin America, Asia, and Africa are too numerous and sordid to be invented from whole cloth. Moreover, the simple fact is that sucking groundwater out of one place, bottling it, and shipping it for sale in another place that typically already has perfectly safe public water ranks high on the list of stupid things to do with scarce water.

So yes, Coca-Cola and Nestle are indeed sucking us dry. So are our modern agricultural practices and unconventional oil and gas extraction, to an even greater extent. A blended privatization scheme may indeed be part of the solution, but if it's done right, it will only make life harder for Coke and Nestle.