The agricultural sector hasn't said many positive things in recent weeks. Not only are investors fretting over deteriorating conditions at agricultural machinery distributor Titan (NASDAQ:TITN), but Deere (NYSE:DE) also recently outlined its expectations for a 3% decline in sales in 2014. Moreover, CNH Industrial (NYSE: CNH)  gave news of its expectation of a decline in demand for its agricultural machinery in 2014. In fact, the only good news -- more relevant to a company like Caterpillar (NYSE:CAT) within the sector -- is that the construction machinery outlook is improving. So, where does all this leave Deere as an investment proposition? It's time to look at three key factors affecting the stock.

First, Deere appears to be winning the initial battle over new machinery sales with Tier 4 emissions standards. Simply put, they are a set of standards applicable to non-road diesel engines which are being phased in during 2008-2015. A quick survey of recent commentary from the four companies highlighted, suggests that Deere is coming out on top.

For example, Deere's director of investor relations, Tony Huegel, acknowledged on the conference call, that first-quarter results were a bit stronger than the company had guided to, and added: "Some of that was related to our tier four transition in the quarter. It went better than we had even anticipated, and so we were able to ship more product than what we had in the forecast."

This is interesting commentary, because Titan CEO David Meyer divulged that the company has been "finding it very difficult to pass" price increases (due to extra costs of Tier 4 compliance) on its machinery to its customers. Bearing in mind that Titan is a key distributor for CNH Industrial, this implies that Deere is doing better than CNH with Tier 4 technology sales.

Similarly, AGCO's net inventories increased more than $300 million to over $2 billion at the end of 2013. To put this into context, at the close of 2012, AGCO held around 15.7% of 2013 sales in inventory, whereas the $2 billion in inventory now represents 18.2% of analyst forecasts for sales in 2014. Moreover, AGCO's management spoke of its end of year inventory position being " affected by a buildup of engines and other finished goods to transition production in 2014 to Tier 4 final emission compliant products."

All told, it suggests that Deere is doing better than AGCO and CNH with Tier 4 machinery, but with an agricultural machinery market in decline in 2014, there is a risk of pricing pressure in the industry.

In other words, a strengthening construction market isn't enough to offset the 6% decline that Deere expects in its agriculture and turf segment in 2013. Deere expects its overall 2014 revenue to decline 3%.

How Deere works in your portfolio
The third factor is by far the most positive. Simply put, a stock like Deere gives your portfolio some diversification. As the following chart demonstrates, the company's share price performance tends to follow price movements in key crops such as corn.

Note how Deere does relatively well in the first recession (as corn prices hold up) while it crashes in the second as corn prices fall dramatically. Moreover, its weakness against the S & P 500 last year is partly due to weak corn prices. 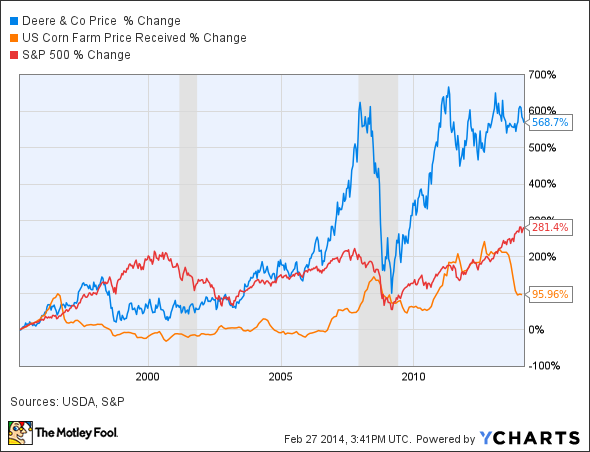 This serves to highlight that Deere can help you diversify your portfolio. It isn't just folloing the main equity market indices. However, on a historical basis, the projection for its future earnings suggests the stock is relatively expensive right now. 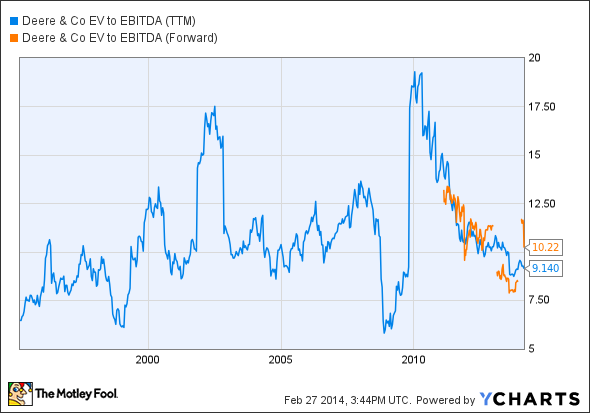 The bottom line
In conclusion, it promises to be a tough year for CNH, Titan and AGCO. Caterpillar may well outperform Deere due to its extra exposure to construction, but it has its own issues to deal with in the mining industry. Focusing on Deere, conditions look like they could get worse before they get better, and the possibility of pricing erosion in the industry cannot be discounted.

On a more positive note, no one really knows what the weather will be like this year, and grains could yet see higher prices in 2014. On balance, investors might be best advised to keep an eye on events and look out for a better entry level than Deere currently trades on. Corn prices won't go down forever.